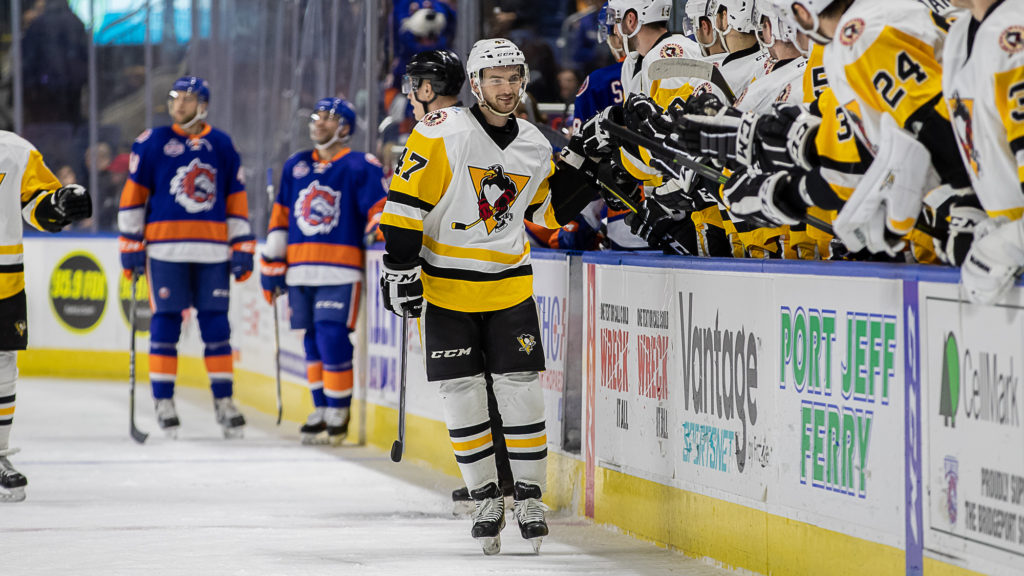 BRIDGEPORT, Conn. – The Wilkes-Barre/Scranton Penguins exploded with offense in the first period and leaned on their goaltender in the second half of the game to secure a 5-2 win over the Bridgeport Sound Tigers at Webster Bank Arena on Sunday.

For the second night in a row, the Penguins built themselves a 4-0 lead before the first intermission. Adam Johnson scored twice 1:17 apart midway through the opening frame, but the Penguins weren’t satisfied with a two-goal cushion. Christian Thomas and Patrick McGrath tacked on tallies at 12:41 and 16:03 of the first period, respectively.

McGrath missed the previous 23 games for the Penguins, but in his first game back in the lineup, he drove to front of the net and tipped in a shot by Zach Trotman for his second goal of the season.

Bridgeport got on the board when John Stevens scored at 11:47 of the middle frame, but Wilkes-Barre/Scranton still had a commanding lead heading into the third period. Peters posted 16 saves in the second period with the Stevens goal being the only shot to get past him.

Gage Quinney earned a tap-in on the backdoor following a defensive zone turnover in the Sound Tigers’ zone, but roughly two minutes later, Steve Bernier cut Bridgeport’s deficit back down to three.

Peters continues to make some great saves on the Sound Tigers who hacked and whacked at any puck they could get their sticks on near the Penguins’ net. Peters’ strong play in net until the final buzzer helped the visitors maintain their lead and bring the game to a 5-2 final score.

Eamon McAdam recorded 10 saves in the first period before being replaced by Kristers Gudļevskis at the start of the second period. Gudļevskis ended up with 12 saves on 13 shots faced.

The Penguins’ next game is Friday, Apr. 13, when they trek to MassMutual Center and attempt to complete the season sweep of the Springfield Thunderbirds.