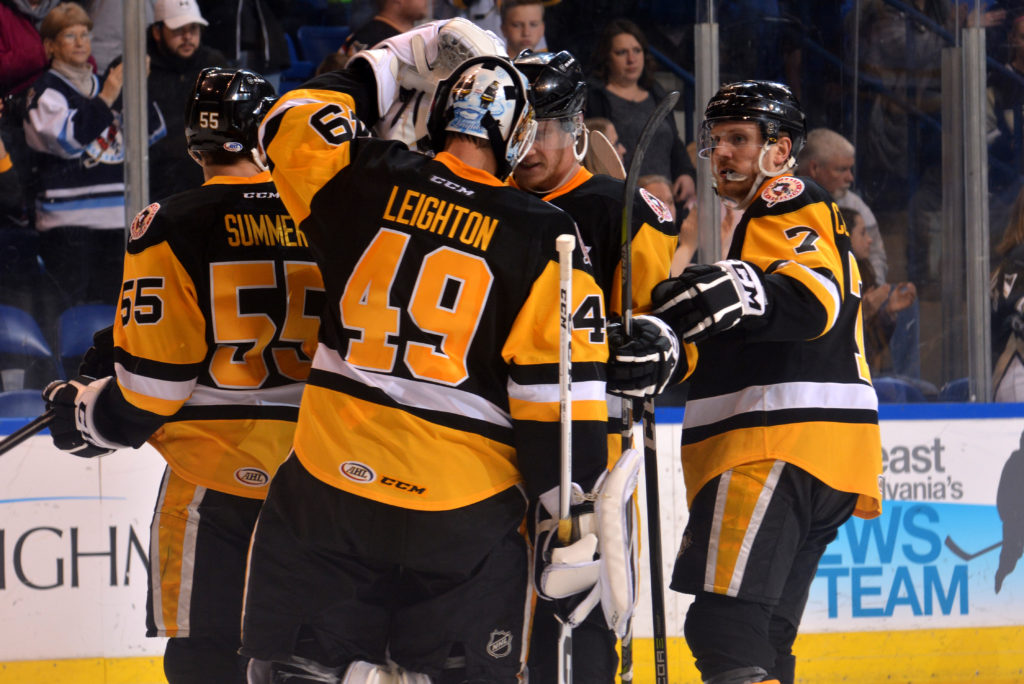 Penguins Close Out Regular Season, Gear Up for Playoffs

Tuesday, Apr. 3 – PENGUINS 5 vs. Hershey 3
The Penguins improved to 9-0-1-1 against their I-81 rival this season in a game that saw Sam Lafferty net his first pro goal. Jean-Sébastien Dea also posted his team-leading fourth shorthanded goal of the season.

Friday, Apr. 6 – PENGUINS 3 vs. Bridgeport 4
Daniel Sprong had a hand in all three of the Penguins goals (1G-2A), but it was not enough to match a desperate Sound Tigers team clinging to its postseason dreams.

Saturday, Apr. 7 – PENGUINS 7 vs. Binghamton 3
The Penguins were victorious in their final regular season home game, completing a perfect six-game season sweep against the Devils and giving Tom Kostopoulos the perfect send off in front of the home crowd. Goalie Michael Leighton improved to 5-0-0 since joining the Penguins.

Friday, Apr. 13 – PENGUINS at Springfield
Wilkes-Barre/Scranton will attempt to complete the four-game season sweep of Springfield, who it has out-scored 13-6.

Sunday, Apr. 15 – PENGUINS at Hershey
The Penguins try to remain unbeaten in regulation against the Bears when the two clubs clash in the last game of 2017-18.

– The Penguins clinched a playoff berth for the 16th straight season. The 16-year postseason streak is the AHL’s active record.

– Daniel Sprong was named to the AHL All-Rookie Team on Wednesday. Sprong currently ranks first among league rookies in goals (30) and shots (192), while sitting second in points.

– With 30 goals on the season, Sprong tied the franchise record for most goals by a rookie, set by Michel Ouellet in 2003-04.