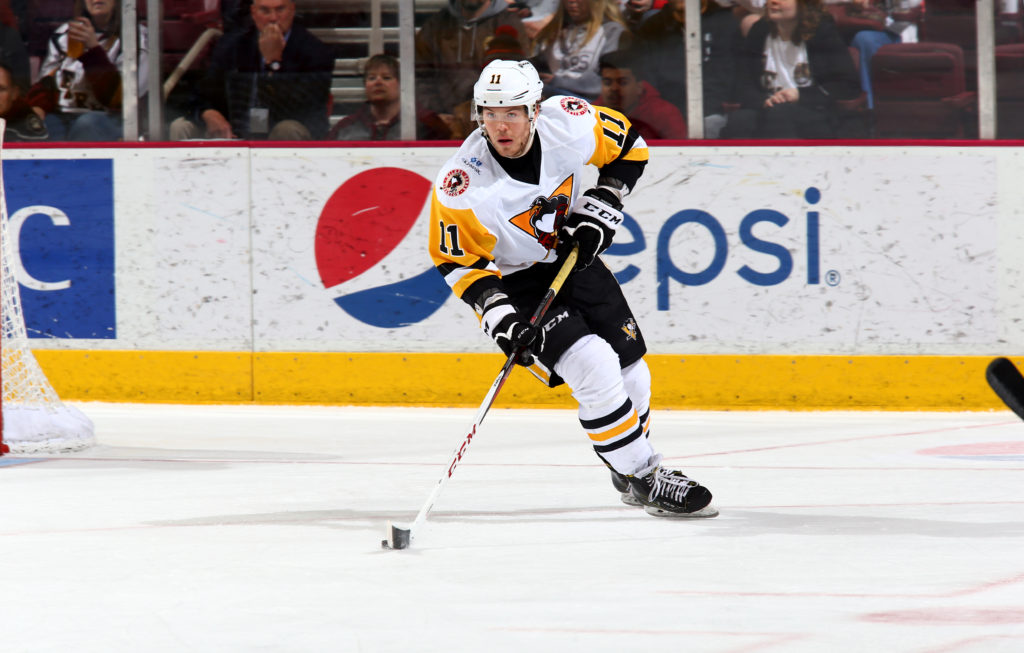 HERSHEY, Pa. – The Wilkes-Barre/Scranton Penguins ended the 2017-18 season on a high note, defeating the Hershey Bears, 3-2, at Giant Center on Sunday evening.

Wilkes-Barre/Scranton ends the season with a 45-22-6-3 record worth 99 points, and it also concludes the 2017-18 campaign on an eight-game win streak against its bitter rival from Hershey.

Daniel Sprong kicked off the scoring for the Penguins on the power play at 10:32 of the opening period. Sprong notched his team-leading 11th man advantage marker and 32nd goal overall this season, which also pulled him into a tie for the second-most tallies in the AHL.

As time was ticking down in the first period, Jarrett Burton shot the puck off the post and in with 18.1 seconds left in the frame to give Wilkes-Barre/Scranton a 2-0 lead. Making his AHL debut, Jan Drozg recorded his first pro point with the secondary assist on Burton’s goal.

The second period was largely uneventful until Dustin Gazley buried one for the Bears 32 seconds before the intermission.

Gage Quinney re-established the Penguins’ two-goal lead by smacking in a rebound at 6:15 of the third period. Kevin Schulze picked off a breakout pass in the Bears’ zone, tapped it over to Sprong who was denied by Vítek Vaněček, but Quinney was in the perfect spot for the loose puck. Schulze gathered his first AHL point with the assist on the play.

Desperate to try and tie the game in front of their home fans in the season finale, the Bears pulled Vaněček for an extra attacker while they were on the power play with 4:20 left in the game. The gamble paid off as Jeremy Langlois found the back of the net during the six-on-four man advantage, making it a 3-2 contest.

Hershey pulled Vaněček again in hopes of getting another extra attacker goal, but never challenged Anthony Peters again before the sound of the final buzzer.

The Penguins wrap up the season 10-0-1-1 against the Bears, the best single-season record in the 19-year history of the I-81 Rivalry.

Both goalies were billed with 27 saves.

Next up for Penguins is the first round of the 2018 Calder Cup Playoffs. They will face-off against the Charlotte Checkers in a best-of-five Atlantic Division Semifinal series, starting with Game 1 at Bojangles’ Coliseum on Friday, Apr. 20.