COMEBACK KIDS? THE PENS HAVE A HISTORY

Dropping the first two contests of a best-of-five playoff series isn’t the ideal situation for any team.

But it’s not the end of the world, either.

The Wilkes-Barre/Scranton Penguins are no strangers to playoff comebacks, including those times when their backs have been firmly against the wall.

But two series stand out above the other 36 they’ve participated in entering the 2018 postseason.

Back in 2004, the Penguins dropped the first two games of the best-of-seven East Division Semifinal against the Bridgeport Sound Tigers, with both losses coming in overtime, before winning a Game Three in the extra frame.

But a 4-2 loss in Game Four had the Penguins fighting for their playoff lives.

Jeff Hamilton gave the Sound Tigers a 1-0 lead 6:17 into the second period, before Tom Kostopoulos beat Dieter Kochan to even the score before the end of the middle frame to complete the regulation scoring.

The teams traded shots in the extra frame before TK set up Tomas Surovy for the winning goal to extend the series.

Game Six saw the series shift back to Wilkes-Barre, and the home cooking paid off for the Pens, who posted a 5-0 win. Matt Hussey opened the scoring midway through the first period and added another goal in the third, while Konstantin Koltsov, Shane Endicott and Kris Beech also tallied. Kostopoulos had two helpers in the win, and Andy Chiodo made 23 saves for the shutout.

Game Seven goes down as one of the most memorable road games in team history, as busloads of the Wilkes-Barre faithful made the trip to Bridgeport, where they saw Koltsov tally the decisive goal in overtime, giving the Penguins a 3-2 win to cap a remarkable series comeback.

Five years ago, the Penguins and the Providence Bruins faced off for the first time in the AHL playoffs, with the clubs meeting in the Eastern Conference Semifinals. And the early results were not good for the Pens.

Wilkes-Barre/Scranton dropped an 8-5 decision in the opening game, which included a four-point effort (1+3) from noted Penguin killer, Chris Bourque.

Game Two saw the Penguins jump out to a 1-0 lead 4:40 into the contest, thanks to Warren Peters’ shorthanded goal. But the Bruins rattled off four goals in fewer than 14 minutes to close out the opening frame, and the Bruins held on for a 4-2 victory.

Game Three, held back in Wilkes-Barre, was a much tighter contest, with Jared Knight and Trevor Smith trading goals in the second period. Brad Thiessen stopped 20 of 21 shots in regulation, but couldn’t stop Carter Camper’s attempt just 31 seconds into OT, giving the Bruins a 2-1 win and a seemingly unsurmountable 3-0 lead in the series.

But things were about to get interesting.

Camper gave the visiting Bruins a 1-0 lead just seven and a half minutes into the game, but that was the only goal Thiessen would surrender, as Peters, Riley Holzopfel and Chad Kolarik scored for the Penguins to give them their first win of the round.

Game Five, also in NEPA, saw Brian Dumoulin’s power play goal give the Penguins a 1-0 lead at 10:55 of the first. Tempers began to flare a short time later, as Bobby Robbins and Adam Payerl dropped the gloves at 14:29. But it was a scuffle behind the play between Christian Hanson and Joey Mormina that gave the Penguins another chance on the man advantage at 16:20. It took Smith just 27 seconds to double the Wilkes-Barre lead with his second goal of the series.

Payerl picked up a goal of his own in the second period, and the game degenerated into a slugfest in the third, with 72 penalty minutes being assessed in the final 5:23. Paul Thompson also added a goal during that time, making the final score 4-0.

Back in Providence, the Bruins poured on the offensive onslaught in Game Six. But Thiessen proved to be too much for the home squad, stopping 46 of 47 shots to lead the Penguins to a 2-1 overtime victory. Dumoulin scored for the second straight game on the power play, while Smith netted the winner 3:26 into OT.

That performance seemed to suck the wind out of the Bruins’ sails, as the Penguins scored four times in the second period of Game Seven, en route to a 5-0 win and an astounding comeback to advance to the Eastern Conference Final.

So sitting in a 2-0 hole isn’t the best place to be for the Penguins. But it’s also not an impossible hole to climb out of.

Game Three of the series with the Charlotte Checkers is this Thursday night at 7:05pm.  Games Four and Five, if necessary, will be held on Saturday at 7:05pm and Sunday at 3:05pm.

Individual game tickets and ticket packages for the 2018 Calder Cup Playoffs are now on sale. With the purchase of a postseason ticket package, fans will receive a $6 food/merchandise voucher for every game played in the playoffs.

Wilkes-Barre/Scranton fans can secure their seats for every game on the Cup run by contacting the Penguins directly at (570) 208-7367, or fill in the form below to be contacted by a ticket representative. 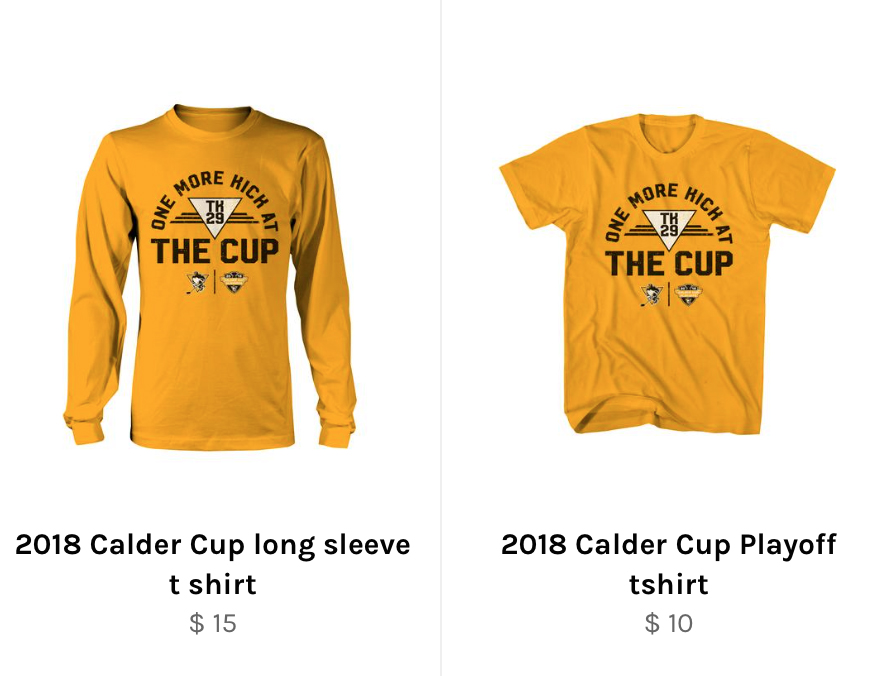 Penguins Playoff T-Shirts are available now at the Penguins Team Store on Coal Street, via the Penguins online store, and at the Igloo Store inside the Mohegan Sun Arena during Thursday night’s game.