The Penguins concluded their 2018 Development Camp with a three-on-three scrimmage tournament. Nick Hart was on hand to take in the festivities which were played in front of a capacity crowd at the UPMC Lemieux Sports Complex in Cranberry, Pennsylvania.

First things first, this was a rather quick event. The tournament consisted of only three games: Two teams played one another at the same time, then to two victors faced off in the “Final”. The games were played with two 14-minute halves instead of three periods, and, of course, every second was played at three-on-three. 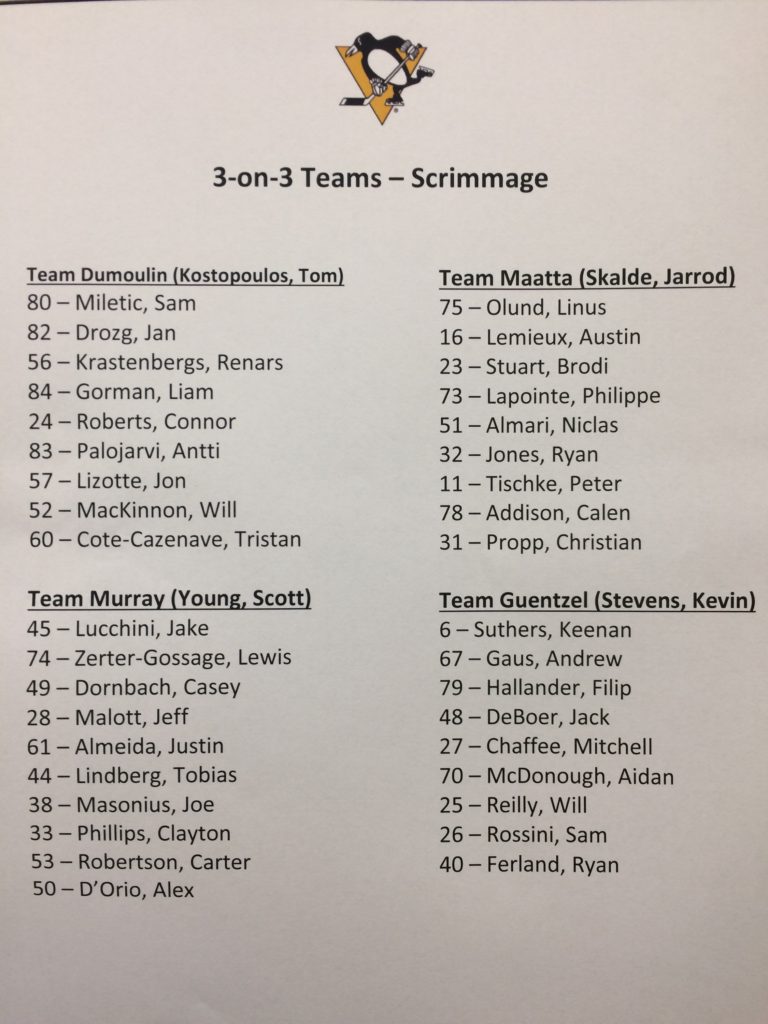 I decided to go over to the side of the ice that featured Team Maatta vs. Team Dumoulin. I wanted to see a team that had Linus Ölund, Niclas Almari and recent draft pick Calen Addison in action, plus there was no way I was going to miss Tom Kostopoulos’ debut behind the bench.

• There’s good flow to this game. Not a lot of stoppages from the goalies. Both teams looking for home run passes.

• Kostopoulos is on the Team Dumoulin side of things, but his opposing coach, Jarrod Skalde, is getting some unexpected help. Next to him is Kasper Björkqvist, another highly-touted Penguins prospect who was held out of development camp drills due to a minor injury.

• There are scoring chances aplenty, but no goals until the two squads score in quick succession. It’s 1-1 midway through the first half.

• Controversy! Niclas Almari appears to tuck a nasty backhand breakaway goal, off the back bar and out, but the referee waves it off. Almari can’t believe it. This may have been your turning point in the game, at least, that’s what Coach Björkqvist was saying later in the night.

• Team Dumoulin gets a goal before the half, but Jan Drozg takes over early in the second. He’s making great individual efforts to set up chance after chance. Eventually, Will MacKinnon scores on a nasty backhand roof job. This one counts, and it’s 3-1, Team Dumoulin.

• Ölund has been a stand-out at camp all week. It’s been a little bit harder for him to make his presence felt in three-on-three, since he doesn’t have the puck on his stick at all times and its harder to show off his well-rounded game with all the open ice. Still, I think Wilkes-Barre/Scranton fans should be excited to see this young man get to work this season.

• Drozg almost scores, but quickly gathers his rebound and throws it in front for Connor Roberts to finish the job. 4-1, Team Dumoulin.

• With time dwindling down and down by three goals, Skalde pulls his goalie for an extra attacker with about four minutes left in the game. Bold strategy, Cotton. Let’s see if it pays off.

• Addison just had a surgical breakout pass to create a breakaway for his team late, but it doesn’t amount to a goal. Team Maatta can’t muster the goals for an equalizer and Kostopoulos’ Team Dumoulin gets the “W”.

• Made it over to the other side of the UPMC Lemieux Sports Complex to see Alex D’Orio perform highway robbery on Will Reilly. D’Orio went post-to-post, then back again with his chest up the whole time to make the save look far too easy.

• Right from the get-go, Team Dumoulin gets a two-on-one and D’Orio makes a snazzy glove save.

• Man, D’Orio remains busy early. Makes a breakaway save on Renārs Kranstenbergs only to see Krastenbergs fish the rebound out of the corner and deliver a pass to MacKinnon for the Final’s first goal. MacKinnon, a defenseman, continues to go to the net-front and get rewarded for it. 1-0, Team Dumoulin.

• Team Murray trying to turn the tide with its first solid possession of the game. Clayton Phillips set-up nicely, but can’t tickle the twine.

• Eight minutes are left in the first half, and it’s still 1-0, Tom Kostopoulos and Team Dumoulin.

• Big save by D’Orio at one end leads to a goal for Justin Almeida for a tie game. Less than a minute later, Casey Dornbach blows past the defense and splits the wickets to give Team Murray the 2-1 advantage! Not long after, Lewis Zerter-Gossage buries one in a wide-open net. My, oh, my how things have turned. Team Murray goes up 3-1 with four minutes left in the half.

• Almeida has been impressive this week. Wide open three-on-three hockey is doing nothing to conceal his skillset, either.

• Sam Miletic sets up Krastenbergs to give Team Dumoulin some life late in the half, but Team Murray trots right down the ice and gets it right back. 4-2, Team Murray.

HALFTIME THOUGHTS: D’Orio, good. Aleida, good. Miletic, driving play for his team, making some power moves to the front of the net, but hasn’t managed to score in this one.

• Five minutes go by without much action before Team Dumoulin pulls within one thanks to Jon Lizotte grinding away at the front of the net.

• D’Orio is human after all. A little leaker gets past him, and Kostopoulos’ Team Dumoulin has pulled within one with 4:31 left in the second half.

• What’s the best time to pull the goalie when the game is played three-on-three? One minute left? Two minutes? Sooner? Earlier, we saw Team Maatta totally dominate possession with the goalie pulled and skating with a four-on-three advantage. They just didn’t get anything to show for it. Four-on-three gives you a lot more ice to work with then a standard six-on-five extra-attacker situation… I’ll let you contemplate that answer for yourself.

• Before Kostopoulos can pull the goalie, Jeff Malott dances around the O-zone and rips one in. 6-4, Team Murray.

• Now Team Dumoulin gets the extra attacker on with 1:32 left. Too little too late? A lot of really close calls, but no cigar.