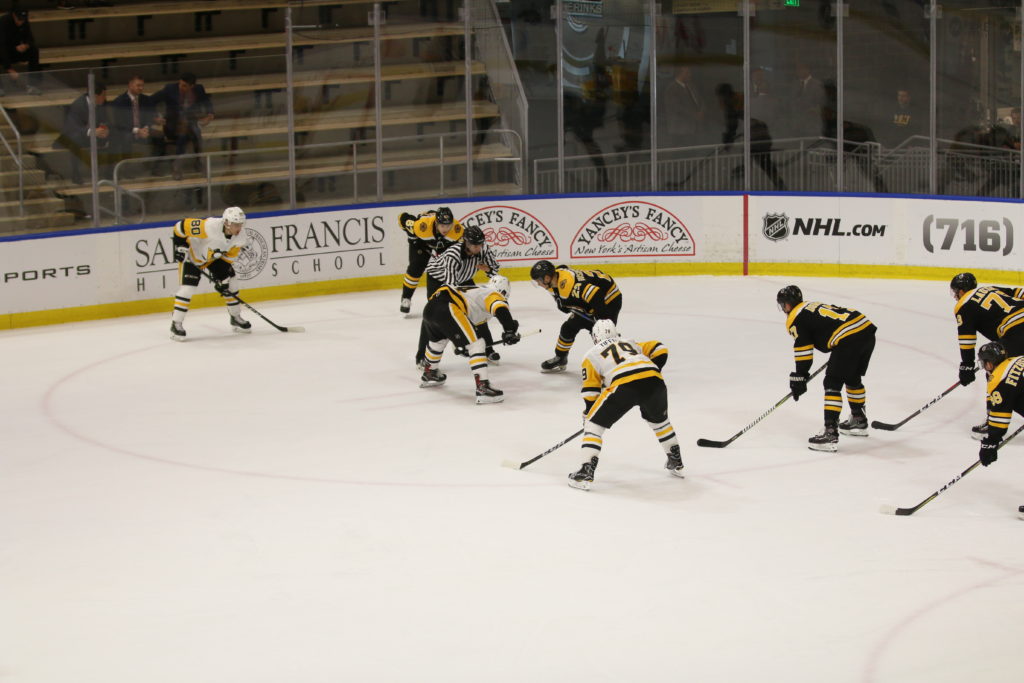 BUFFALO, N.Y. – The first game of the 2018 Prospects Challenge in Buffalo, New York went to the Boston Bruins, who took advantage of a slow start to the contest by the Pittsburgh Penguins.

The Penguins dug themselves a deep hole early in the game, battled back late, but still sustained a 4-2 loss.

“It was our first game of the year, first as a group, I guess it takes a little time to get the hockey legs back,” said Penguins forward Sam Miletic. “After the first period, I thought we were really good.”

While maybe the plays were not formulating as either side would have hoped in the early going, both teams weren’t treating the contest like a scrimmage by any means. It was a physical start, with Penguins and Bruins throwing their weight around at will. The most noticeable heavy hitter was Anthony Angello, who decked three Bruins within the first seven minutes of the game. One particular hit of note came on Ryan Donato in the neutral zone while Angello was the one carrying the puck.

As the rough stuff gradually waned and play started to open up, Cameron Hughes and Jack Studnicka combined for two pretty goals less than a minute apart, giving the Boston prospects a 2-0 lead midway through the first period.

Donato tacked on another goal for Boston with 1:03 left in the opening frame, and Wiley Sherman buried one in the first two minutes of period two, bringing the score to 4-0.

Penguins had three power play opportunities in the second period after Sherman’s goal, but couldn’t convert.

Nothing seemed to be going the Penguins’ way, until Troy Josephs set up undrafted invitee Connor Roberts on a two-on-one, and Roberts finally got the Pittsburgh prospects on the board in the third period. Adam Johnson tacked on the Penguins’ second goal of the day with a lovely individual effort, but it proved to be too little too late with only 36.6 seconds remaining in regulation.

Johnson considered the late outburst of offense from he and his teammates be a cause for optimism moving forward.

“[Boston] took it to us a little bit and got a few goals right away,” Johnson said. “It’s hard to come back from that, but we got that push at the end. Hopefully, we can build off that tomorrow.”

The Penguins will be at it again and looking for a better result tomorrow against the New Jersey Devils prospects. Game time is scheduled for 3:30 p.m. at KeyBank Rink at Haborcenter.

• Alex D’Orio manned the pipes for the Penguins. He started all three games at the Prospects Challenge last year, but we’ll see if someone else gets the call tomorrow.

• Sam Miletic hit the post twice in the first period. The puck seemed to follow him at times during the game, he just couldn’t get his shots to find the back of the net. If those posts bounce a different way, we could be talking about a totally different game.