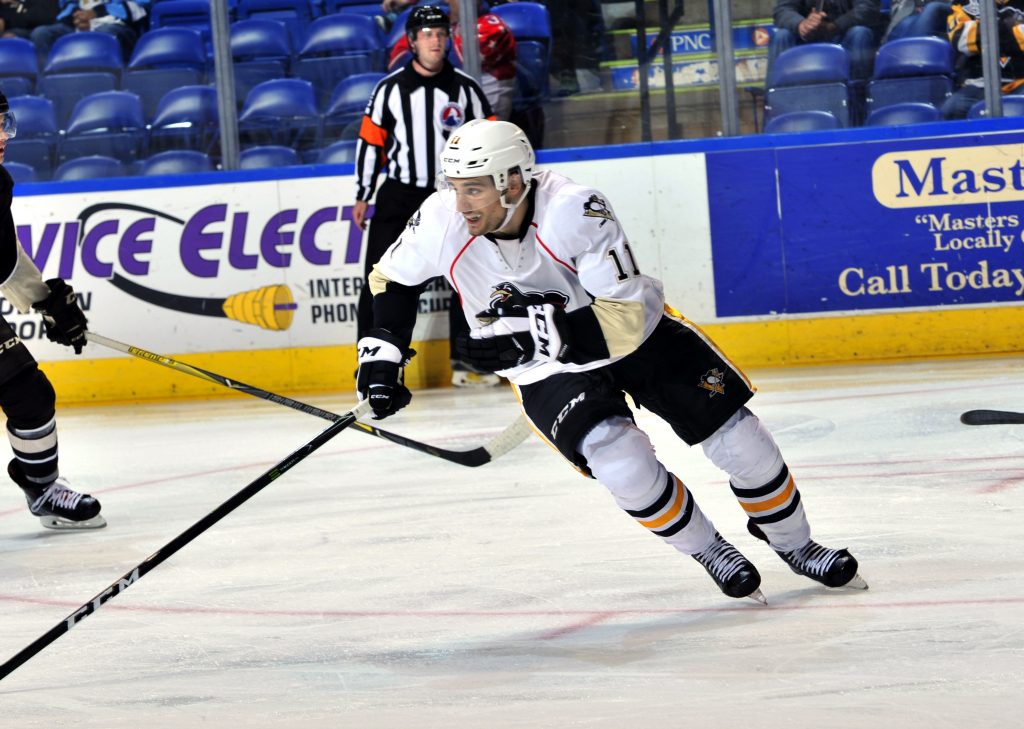 WILKES-BARRE, Pa. – The Wilkes-Barre/Scranton Penguins got big-time performances from two of their incoming rookie forwards in a 6-2 preseason triumph over the Hershey Bears at Mohegan Sun Arena at Casey Plaza on Saturday night.

Sam Lafferty and Sam Miletic both delivered two-goal performances for the Penguins, who improved to 2-0-0-0 in their exhibition schedule with Saturday’s win. Another first-year pro, Matt Abt, chipped in with two assists.

For the second preseason game in a row, the Penguins jumped out to a 2-0 lead thanks to back-to-back swift strikes in the first period. Lafferty opened the scoring for the Penguins 10:30 into the contest. Sixty-eight seconds later, Miletic buried his second goal of the preseason.

Wilkes-Barre/Scranton carried that 2-0 lead into the first intermission, only surrendering two shots to Hershey in the opening frame. However, the Bears needed little time to make their third shot of game count, as Jeremy Morin scored on a breakaway 15 seconds into the second stanza.

Ethan Prow reestablished the Penguins’ two-goal lead with a booming slap shot from the point at 7:48 of the second period.

The Bears thought that they had found life when Steven Whitney buried a wraparound try at 13:33 of the middle frame, but Teddy Blueger came right back 34 seconds later and scored with a perfectly placed shot over Vítek Vanĕček’s glove.

Lafftery added to the Penguins’ lead with his second goal of the night with three minutes remaining before the conclusion of the period, and Miletic made it 6-2 by finding the back of the net on a power play goal midway through the third and final frame.

Penguins goalie Anthony Peters was only tested 15 times in the contest, making 13 saves in the process. Vanĕček saw 32 shots and recorded 26 saves.

The Penguins’ next preseason game is Saturday, Sept. 27, when they face the Hershey Bears at Mohegan Sun Arena at Casey Plaza. Wilkes-Barre/Scranton opens the regular season at home on Saturday, Oct. 6 in a contest against the Springfield Thunderbirds.