A BUSY DAY IN THE ‘BURGH 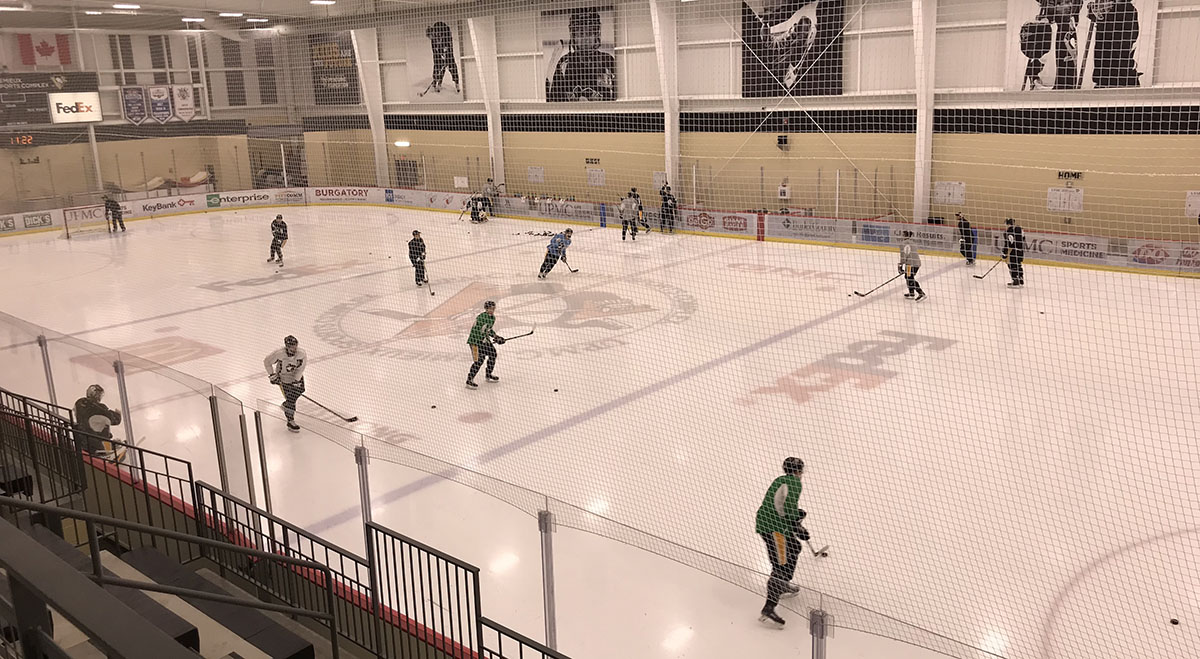 The Wilkes-Barre/Scranton Penguins were back on the practice ice on Wednesday morning, but they were NOT at the Toyota SportsPlex, where they spend most of their non-game days.

Instead, the AHL club took advantage of a favorable early season schedule to suit up at the UPMC Lemieux Sports Complex in Cranberry, PA.

It just so happens that the practice home of the Pittsburgh Penguins is just a short distance off of I-80.  And with Wilkes-Barre/Scranton headed west to face off with the Cleveland Monsters this Thursday and Saturday, the quick detour gave the club a chance to take in the big team’s facilities.

The day started a bit earlier than usual for a handful of Pens, as the crew from Inside Penguins Hockey on AT&T Sportsnet Pittsburgh stopped by to shoot features on some of the Wilkes-Barre skaters.  Zach Trotman, Sam Lafferty, Thomas Di Pauli, Ryan Haggerty, John Muse and Teddy Blueger all took turns in front of the camera before joining their teammates for a pre-practice breakfast and stretch.

Once 11:30 rolled around, it was all business as usual though, with a spirited practice taking place on the building’s second ice sheet – the first still populated by a handful of players for the big club.

A larger than usual media contingent stuck around to catch up with Blueger, Zach Aston-Reese, and Tristan Jarry, who drew much of the attention after news of Matt Murray being diagnosed with a concussion.

But by 2:00pm, the Pens were packed up onto the team bus once again, ready to make the short two-hour trip to Cleveland in preparation for this week’s contests at the Quicken Loans Arena.

Jarry suffered a small injury in training camp, and started the season with the NHL club.  He was reassigned to Wilkes-Barre on Saturday night, but did not dress for the team’s season opener against the Springfield Thunderbirds.

Now fully healed, Jarry had been using his time in Wilkes-Barre this week to get back into game shape.  And with Murray potentially out of the lineup this week, Jarry knows he has to be ready to return to Pittsburgh at a moment’s notice.

“You never know on any given day where you might be and what might happen,” he said.  “I think it’s just being prepared and making sure you’re on top of things.

“It’s tough to plan out your week, you never know where you’ll be.  You just take it day by day, try to focus on what you can in practice.”

Wilkes-Barre/Scranton defenseman Chris Summers brought a little levity to the Jarry press availability, jumping in to ask if Jarry chose to be a goalie (“No, I was forced into it”) and if he still wanted to be a goalie, or an actual player.  The good-natured ribbing brought smiles to the faces of reporters and goaltenders alike.