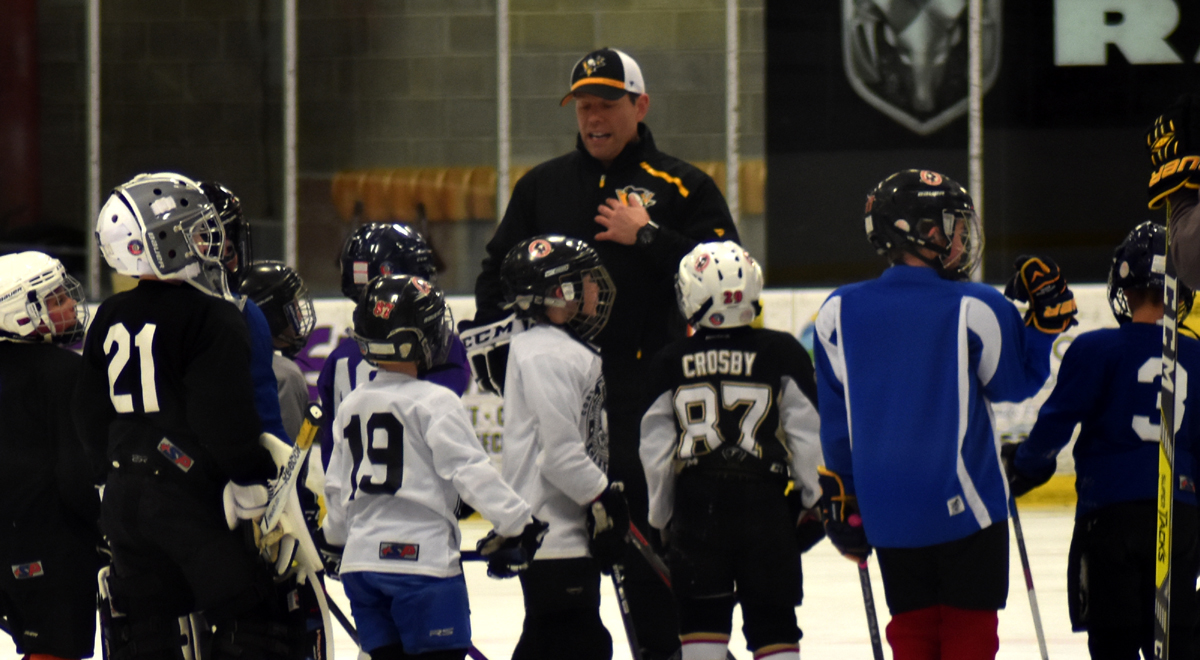 WILKES-BARRE, Pa. – When Ty Hennes typically embarks on his monthly trip across the state of Pennsylvania, he’s usually cruising solo. Last week was not the average week for Hennes, so of course he had to start things off with a change of pace by driving across the state with his dog, Koda, in the passenger seat. A yellow lab, Koda provided the Penguins Skating and Skills Development Coach with a little extra company as he trekked to the Toyota SportsPlex at Coal Street for a full week of practice with the Wilkes-Barre/Scranton Penguins.

Usually, Hennes drops in for a skills-based instructional practice with the AHL club once every four-to-five weeks, but he brought Koda along with him for this trip because he wasn’t staying for just one hour-long ice session. He was sticking around for a full six days.

Hennes capitalized on the extra time he was getting with the Penguins with multiple practices, welcomed by the Wilkes-Barre/Scranton coaches and players alike. Moreover, he also allocated his coaching smarts during his extended stay in Northeastern Pennsylvania to the Junior Penguins youth hockey program, which also plays out of the Toyota SportsPlex.

“We had a ton of fun with the Junior Pens,” Hennes said. “We kind of covered the whole spectrum of youth hockey from eight-years-old to 18-years-old. We had a blast. I tried to show quite a few of the drills that we do daily with Crosby, Malkin, Letang, Kessel and show them what we do, what they can do, and then I think we had a little bit of fun as well.”

Hennes spends plenty of his time working within the serious confines of professional hockey. He helps construct about a fourth of the Pittsburgh Penguins’ daily practices on non-game days, with the other 75 percent of the practice plan belonging to the minds of Pittsburgh’s coaches Mike Sullivan, Sergei Gonchar and Mark Recchi. It’s a job he loves, but the occasional opportunity to break free of the pressures of the pro game and teach youth hockey still inspires passion in the 38-year-old skills coach.

“That’s the most enjoyable part of youth sports, and I think it should be with all coaches,” Hennes said. “We’re out here to provide a great experience for the eight-year old or 10-year old in front of us. Now, their questions are a lot different than the pros, their attention span is a lot different, but every kid, as long as they’re coming off the ice smiling, that’s what it’s all about.”

Pittsburgh’s commitment to letting Hennes come cross-state to assist the prospects in Wilkes-Barre/Scranton is a luxury to begin with, but then Hennes also getting the chance to skate with budding youth hockey players in the area is nothing short of fantastic. He’s in his position with the Penguins organization for a reason, a former collegiate and professional player who quickly caught the coaching bug at the end of his career. After going back to school to become a doctor, he ultimately established roots within USA Hockey and evolved into an ambassador for the “ADM” model when it was first introduced to youth hockey programs across the country. Hennes worked his way up from various stages of amateur hockey until he ascended to the position he holds now with the Penguins.

Hennes’ impact has been felt by countless NHL and AHL players that have come through the Penguins organization over the past four years, and the chance to work with someone like him isn’t lost on guys like Ethan Prow who are still trying to hone all of their skills in order to be the best player they possibly can.

“We love having him any time we can get him down here,” Prow said. “He brings a little freshness to the game for us, and that’s the kind of stuff everybody wants to work on. It’s not every day you get to out there with an expert to work on your hands, your edges, some of the little aspects of the game.”

After last weekend, Hennes and Koda drove back across the Keystone State. Hopefully, it won’t be long until he returns to Northeastern Pennsylvania so that he can impart more knowledge to the Wilkes-Barre/Scranton Penguins and Junior Penguins alike.