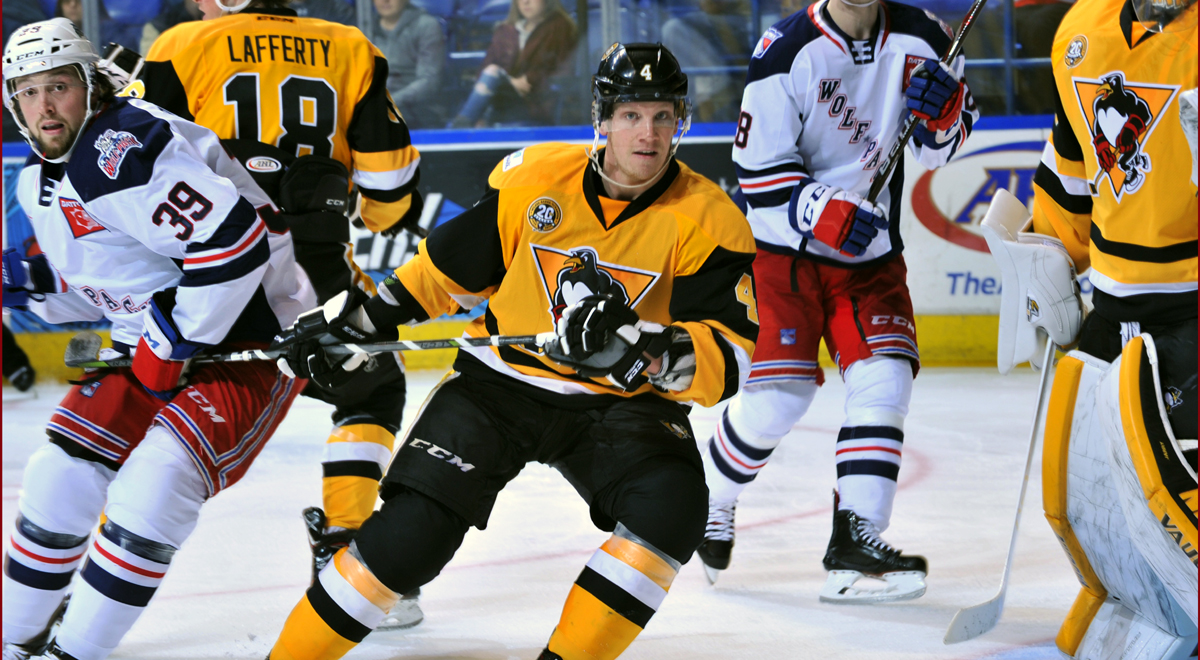 WILKES-BARRE, Pa. – After emerging victorious the night before, the Wilkes-Barre/Scranton Penguins lost the second game of a back-to-back set with the Hartford Wolf Pack, 3-2, on Saturday night at Mohegan Sun Arena at Casey Plaza.

Wilkes-Barre/Scranton (6-3-0-1) peppered its opponent with 37 shots on goal, and despite a plucky attempt at a comeback, time expired before the Penguins could equalize.

For the second game in a row, the Wolf Pack opened the scoring by converting on their first power play of the night 2:15 into the first period. Hartford’s leading goal-scorer, Steven Fogarty, collected the puck near the goal line and tucked it on his backhand, giving his team a 1-0 lead.

Ryan Haggerty, a former member of the Wolf Pack, helped the Penguins match Fogarty’s tally by setting up Sam Lafferty’s goal midway through the first period. Haggerty used his speed to evade the Hartford defense, danced along the blueline and barely held the puck onside before releasing a heavy shot that was tipped in by Lafferty.

A pair of Hartford goals during the middle frame, including a second from Fogarty, put the Wolf Pack in control and forced Wilkes-Barre/Scranton to play in comeback mode for the remainder of the contest. However, with a little more than five minutes to go until the second intermission, the Penguins slashed the deficit in half with a timely goal from Zach Trotman. The Wolf Pack were booked with an icing call and stuck with tired players on the ice before a fresh Teddy Blueger pulled a clean face-off win back to Trotman who blasted it behind Marek Mazanec.

Mazanec was impenetrable from that moment forward, making stop after stop on the Penguins in the third period, including a shorthanded breakaway save on Garrett Wilson. Wilkes-Barre/Scranton threw everything they had at the Hartford netminder, but the final buzzer arrived ahead of a tying goal by the home team.

Wilkes-Barre/Scranton’s next game is tomorrow, Sunday, Nov. 4, against another Atlantic Division opponent from Connecticut as they travel to take on the Bridgeport Sound Tigers. The Penguins’ next home game is Friday, Nov. 16 in what promises to be a heated head-to-head with the Charlotte Checkers. Puck drop between the Penguins and Checkers is scheduled for 7:05 p.m. at Mohegan Sun Arena at Casey Plaza.