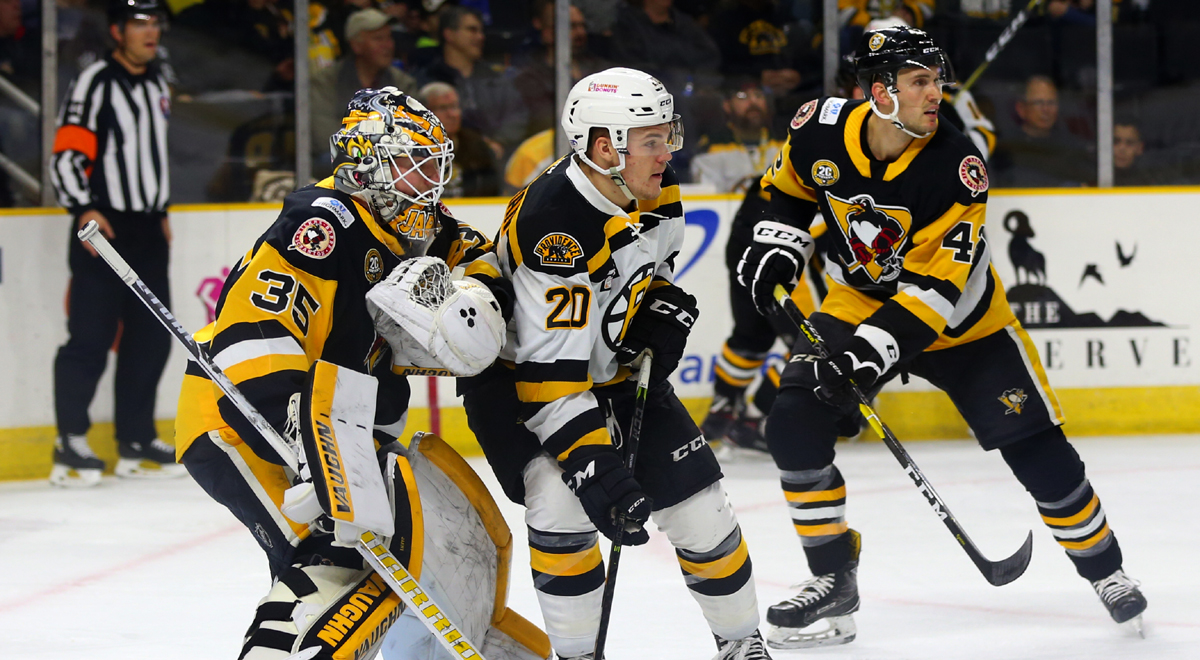 PROVIDENCE, R.I. – The Wilkes-Barre/Scranton Penguins dropped a 2-1 overtime decision to the Providence Bruins in a defensive battle at Dunkin’ Donuts Center on Friday night.

Wilkes-Barre/Scranton (6-4-1-1) pushed Providence to overtime with a goal late in regulation from Sam Lafferty, but before that, the game was defined by stout defense and spectacular goaltending on both sides. Tristan Jarry and made 36 saves throughout the contest while manning the pipes for the Penguins, including some huge stops in the third period and overtime.

Providence took the lead at 11:26 of the first period on a sneaky power play finish by Martin Bakoš. In a series of swift passes, Bakoš took a dish from fellow Czech countryman Jan Kovář right at the backdoor to the side of Jarry’s net and gave his team the first goal of the night.

Jarry his settled in after the early goal against, but Providence’s Dan Vladař would not be outdone. The Bruins goalie was bombarded by Penguins shots in a torrid second period flurry, but the red lamp was not triggered by the visitors through the contest’s first 40 minutes.

Lafferty finally solved Vladař with 4:52 in left in regulation, outracing the Providence defense to a puck in the neutral zone and then firing the equalizing wrister past the glove of the Bruins’ previously impenetrable netminder.

The Penguins went to the penalty kill yet again in the overtime period, and Ryan Fitzgerald capitalized on the extra frame man advantage with a tap-in at the post. Fitzgerald’s game-winner came at 3:43 of OT.

Jarry recorded six saves during the overtime before being beaten by Fitzgerald, his second six-save overtime performance of the season. Vladař ended the game with 27 stops on 28 shots faced.

Wilkes-Barre/Scranton’s next game is tomorrow, Saturday, Nov. 11, against the Hartford Wolf Pack. The Penguins will return to their home ice next Friday, Nov. 16, in what promises to be a heated head-to-head with the Charlotte Checkers. Puck drop between the Penguins and Checkers is scheduled for 7:05 p.m. at Mohegan Sun Arena at Casey Plaza.