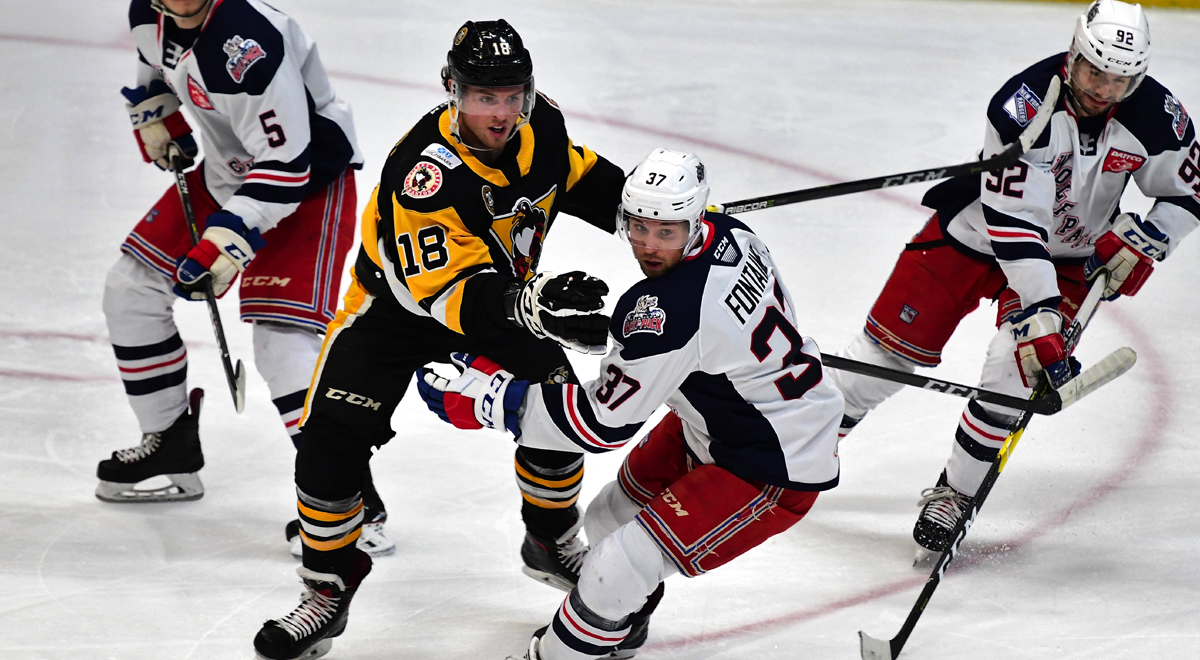 HARTFORD, Conn. – The Wilkes-Barre/Scranton Penguins stunned the Hartford Wolf Pack with a high-flying start in their 4-1 win at XL Center on Saturday night.

Wilkes-Barre/Scranton (7-4-1-1) was fired up from the get-go and came out swinging with three goals in the first five minutes of the game, leading the team to victory in its first visit to Hartford this season.

Thomas Di Pauli struck first with a goal from the hash marks 1:40 into the contest. Derek Grant added another tally by winning a race to a loose puck in the Wolf Pack zone and then flinging a shot through Dustin Tokarski’s five hole at 3:23. Teddy Blueger continued the Penguins’ swift start by burying a rebound at 4:31 of the opening frame, give the visitors’ a sudden 3-0 lead.

Desperate to get back in the game, Hartford peppered Wilkes-Barre/Scranton with shots late in the first period, but Anthony Peters passed every test the Wolf Pack threw his way.

Midway through the second period, the Wolf Pack finally beat Peters and slashed their deficit down to two goals with a man advantage marker from Tim Gettinger. However, less than two minutes later, Blueger set up Jimmy Hayes in the slot and Hayes put the puck in the top corner to reestablish the Penguins’ three-goal lead.

Hartford put forth its best effort at a comeback in the final frame, but Peters remained solid between the pipes for the Penguins. He stopped all 13 shots faced in the third period and finished the game with 31 saves overall. Peters was also rewarded for his efforts with an assist on Grant’s goal in the first period, the goalie’s first helper of his AHL career.

Tokarski made 28 saves in the loss for Hartford.

Wilkes-Barre/Scranton’s next game is tomorrow, Sunday, Nov. 11, against the Providence Bruins. The Penguins will return to their home ice next Friday, Nov. 16, in what promises to be a heated head-to-head with the Charlotte Checkers. Puck drop between the Penguins and Checkers is scheduled for 7:05 p.m. at Mohegan Sun Arena at Casey Plaza.