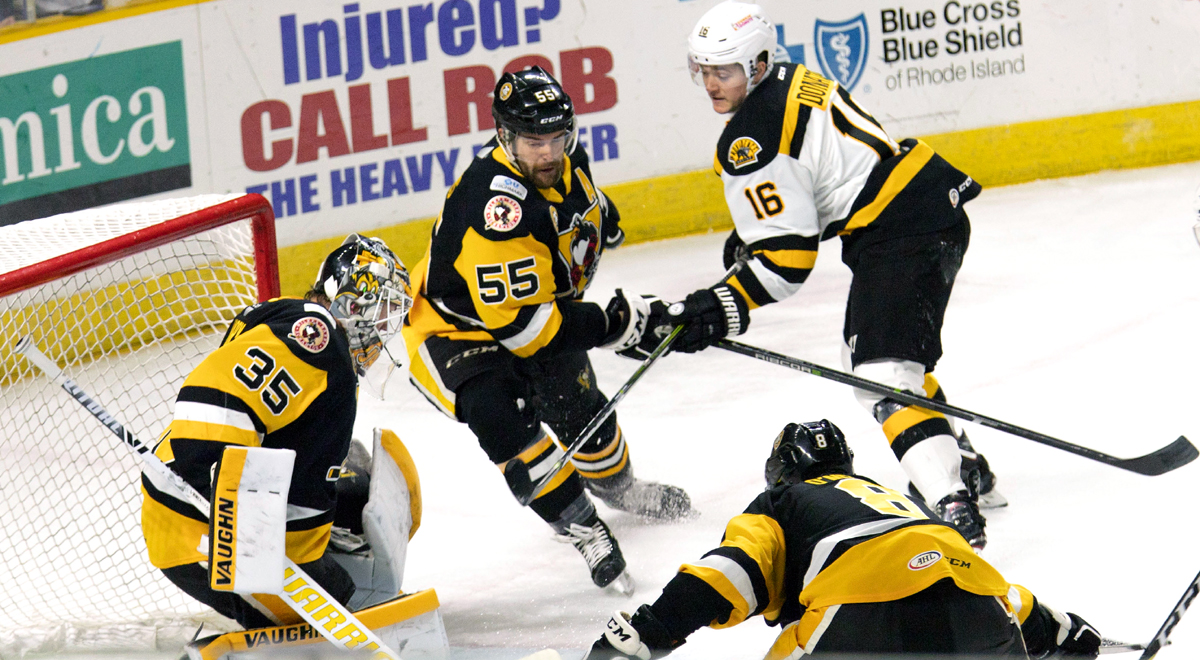 PROVIDENCE, R.I. – The Wilkes-Barre/Scranton ended their weekend with a loss at the hands of the Providence Bruins, 5-2, in a Sunday afternoon contest at Dunkin’ Donuts Center.

Wilkes-Barre Scranton (7-5-1-1) received a stellar 34-save performance from Tristan Jarry despite being dealt the loss, and the group playing in front of Jarry even made things interesting with two third period goals. Derek Grant and Anthony Angello provided hope for the visitors, but the comeback effort came too late when trying to match the Bruins’ quick start.

Ryan Donato scored the contest’s opening tally on the man advantage, and another goal by Martin Bakoš shortly thereafter put Providence ahead, 2-0, before the first intermission. Even though he allowed two pucks to get behind him, Jarry was dealt a heavy workload in the first period and still managed to make 16 saves in the game’s first 20 minutes.

The Bruins carried their hot streak into the second period, as a pair of goals courtesy of Zach Senyshyn and Joel Messner gave Providence a sturdy 4-0 lead. Senyshyn’s tally came on a breakaway at 3:32 of the middle frame, while Messner scored on the power play four minutes later.

The Penguins had their best-looking series of shots of second period come while on a late five-on-three man advantage as time ticked down in the second stanza. Zane McIntyre was solid in the net for Providence during that sequence, however, as he thwarted Wilkes-Barre/Scranton’s best chance to close the gap.

The Penguins showed a sense of urgency in the third, ending McIntyre’s shutout bid on Grant’s third goal in four games at 9:24 of the period. Angello continued the comeback push for the Penguins, slashing the Providence lead from just a minute earlier in half, 4-2, and putting all of the game’s momentum back in the Penguins’ corner.

Wilkes-Barre/Scranton nearly made it 4-3 when Jarrett Burton was robbed on the doorstep by McIntyre, and Donato earned his second tally of the game just moments later at 14:36 of the final frame of regulation, brining the game to its ultimate score.

McIntyre ended the afternoon with 20 saves on 22 shots faced.

Wilkes-Barre/Scranton’s next game is Wednesday, Nov. 14 when they visit the Springfield Thunderbirds and drop the puck at an early 10:35 a.m. start time. The Penguins will return to their home ice next Friday, Nov. 16, in what promises to be a heated head-to-head with the Charlotte Checkers. Game time between the Penguins and Checkers is scheduled for 7:05 p.m. at Mohegan Sun Arena at Casey Plaza.