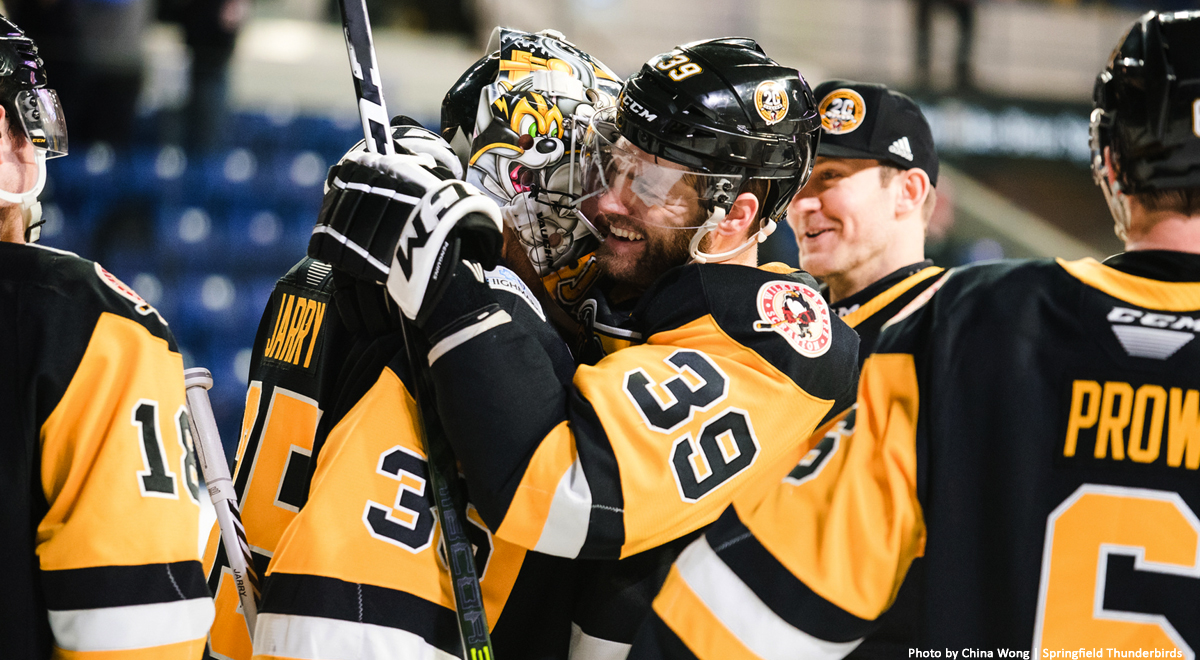 SPRINGFIELD, Mass. – Tristan Jarry made history on Wednesday afternoon, scoring in the Wilkes-Barre/Scranton Penguins’ 5-1 victory over the Springfield Thunderbirds at MassMutual Center.

Jarry recorded the first goal by a goalie in franchise history, as Wilkes-Barre/Scranton (8-5-1-1) tallied late in all three periods while smothering the Thunderbirds defensively. Jarry scored an empty netter in the third period and then led the fist bump line for the 14th goalie goal in AHL history.

The Penguins and Thunderbirds began the game in power struggle, and when Springfield turned up the heat, both Jarry and forward Teddy Blueger came up with big saves to keep the game scoreless. Jarrett Burton broke through at 16:25 of the first stage by redirecting a shot from Stefan Elliott. A little over a minute later, Linus Ölund buried one through the five-hole of Michael Hutchinson, giving Wilkes-Barre/Scranton a 2-0 lead.

Once again, the middle frame began with back-and-forth scoring opportunities for both squads, but neither team could find the back of the net until there was only 3:40 left before the intermission. Derek Grant fed Anthony Angello in the slot, and Angello sent his shot soaring into the top right corner of the net.

From then on, the game became about securing the shutout for Jarry. Despite stout team defense in the third period, Springfield rallied for a single tally during a late man advantage, extra attacker situation. Shortly after Joel Lowry soiled the clean sheet, Jarry got his revenge by scoring the first goal of his career at 18:35 of the final frame.

Jimmy Hayes tacked on another goal for good measure, making it 5-1 with 35.4 remaining in regulation.

Both Jarry and Hutchinson turned away 30 shots on the day.

Wilkes-Barre/Scranton’s next game is Friday, Nov. 16, in what promises to be a heated head-to-head with the Charlotte Checkers at Mohegan Sun Arena at Casey Plaza. Puck drop between the Penguins and Checkers is scheduled for 7:05 p.m.