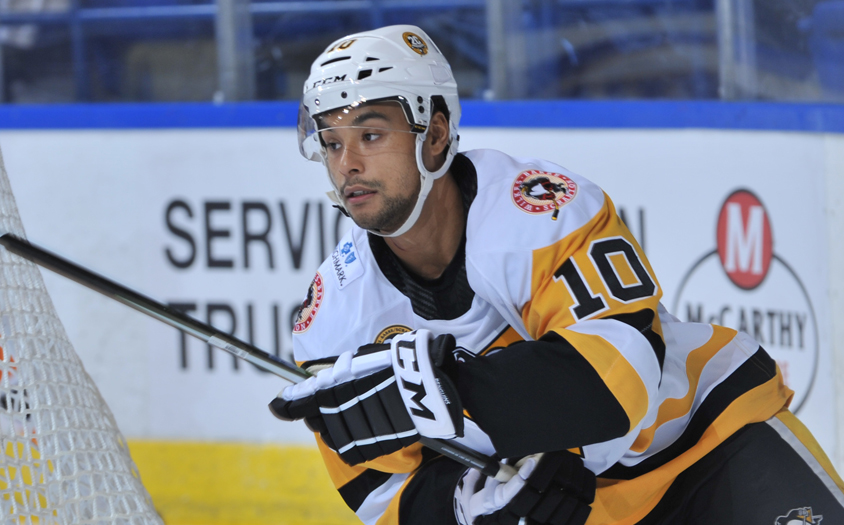 WHEELING, WV- The Wheeling Nailers, proud ECHL affiliate of the Pittsburgh Penguins, are excited to announce that Troy Josephs has been selected as Inglasco ECHL Player of the Week for the week of November 12-18.

Josephs, 24, had an outstanding week for the Nailers, who posted a 3-1-0 record, as they climbed into fourth place in the Central Division. Troy started the week with the team’s lone goal on Tuesday morning in a 2-1 defeat against Toledo. On Friday night, the second year forward netted his second career hat trick, scoring the first three goals of the contest, as Wheeling opened a three-game road trip with a 4-1 triumph in Jacksonville. After being held off of the scoresheet during Saturday’s 4-1 win at South Carolina, Josephs had another strong outing on Sunday, scoring twice, while assisting on Nick Saracino’s overtime winner, as the Nailers edged Greenville, 5-4.

The Whitby, Ontario native started the 2018-19 season with the Wilkes-Barre/Scranton Penguins, before joining the Nailers on October 27th. During that time, he has posted electric numbers, as his 11 goals rank second in the ECHL. Josephs has been almost a point-per-game player in his career with Wheeling, amassing 27 goals, 23 assists, and 50 points in 53 matches.

Josephs has appeared in one game with Wilkes-Barre/Scranton this season, picking up an assist in the team’s game against the Lehigh Valley Phantoms on October 20.  He has appeared in 18 games with the Penguins in parts of three seasons, recording three points (1+2).

This is the first time that Josephs has been chosen as Inglasco ECHL Player of the Week. The last Wheeling player to earn the honor was Garrett Meurs during the opening week of the 2017-18 campaign. At least one member of the Nailers has earned Player of the Week honors in six consecutive seasons.

On behalf of Josephs, a case of pucks will be donated to the Wheeling Amateur Hockey Association (WAHA) by Inglasco, the exclusive puck supplier of the ECHL. Since beginning its sponsorship of the award in 2000-01, Inglasco has donated more than 39,000 pucks to youth hockey organizations in ECHL cities.

Wilkes-Barre/Scranton’s next game is the Friday after Thanksgiving, Nov. 23, when it pays a visit to play the Springfield Thunderbirds.

The Penguins’ next home game is Saturday, Nov. 24 against the Hershey Bears. Game time for the Penguins and Bears is scheduled for 7:05 p.m. at Mohegan Sun Arena at Casey Plaza.  It’s Hockey Fights Cancer night, and the Penguins will be wearing special lavender jerseys which will be auctioned off to benefit the Mario Lemieux Foundation.