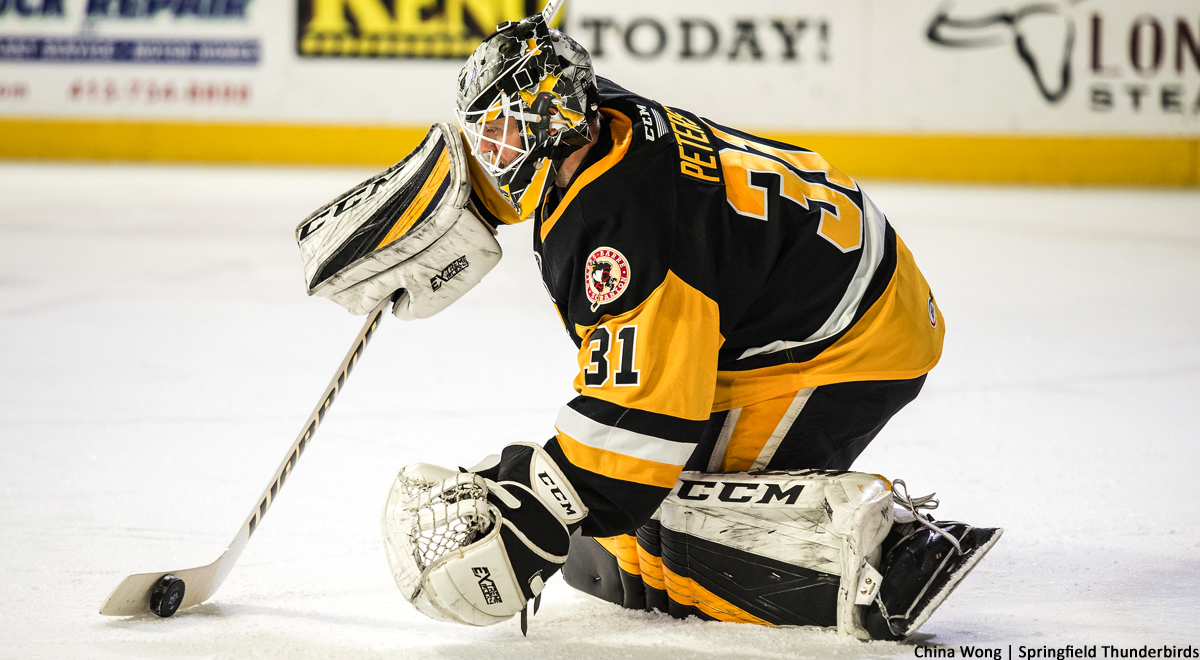 SPRINGFIELD, Mass. – The Wilkes-Barre/Scranton Penguins dropped a 4-3 overtime decision to the Springfield Thunderbirds on Friday night at MassMutual Center.

Wilkes-Barre/Scranton (8-6-3-1) received an excellent performance from Anthony Peters between the pipes. Peters’ 39 saves were a season high for all Penguins goaltenders this season, but it fell short of the win as Springfield tallied a power play goal in overtime for the victory. Defenseman Ethan Prow also had a strong showing, factoring in on all three Penguins goals (1G-2A).

Springfield’s deadly power play saw Harry Zolnierczyk open the scoring with a tally 5:19 into the game.

The Penguins got on the board early in the second period with Joseph Cramarossa’s first goal of the year. Minutes later, Teddy Blueger potted a man advantage marker at 7:54 and gave Wilkes-Barre/Scranton its first lead of the game. However, Springfield offered a swift response as Paul Thompson evened things up, 2-2, 66 seconds after Blueger’s go-ahead goal.

Blaine Byron put the Penguins in a 3-2 hole going into the final stanza by scoring on a rebound with 1:24 left before the second intermission.

Halfway through the third period, Prow took a shot from the blueline that veered off of Springfield’s Ian McCoshen and into the back of the net for a 3-3 equalizer. The goal marked Prow’s third point on the night, giving him his third three-point game this season.

As time ran short in regulation, Peters conjured two magical glove saves to help the game reach overtime. Peters first denied Henrik Borgström with 1:01 left in the third period, and then came up with an equally spectacular stop on Ludwig Byström when only 1.7 seconds were shown on the clock.

Jacob MacDonald beat Peters 1:16 into the extra period with a one-timer on the power play, sending the Penguins home with their second straight overtime defeat. Samuel Montembeault finished the game with 26 saves in the win.

Wilkes-Barre/Scranton’s next game is tomorrow, Saturday, Nov. 24, when it returns to home ice and takes on the Hershey Bears.  It’s Hockey Fights Cancer night, and the Penguins will be wearing and auctioning special lavender jerseys to benefit the Mario Lemieux Foundation.  Puck drop between the Penguins and Bears is scheduled for 7:05 p.m. at Mohegan Sun Arena at Casey Plaza.