THIRD PERIOD PUSH COMES UP SHORT IN LOSS TO HERSHEY 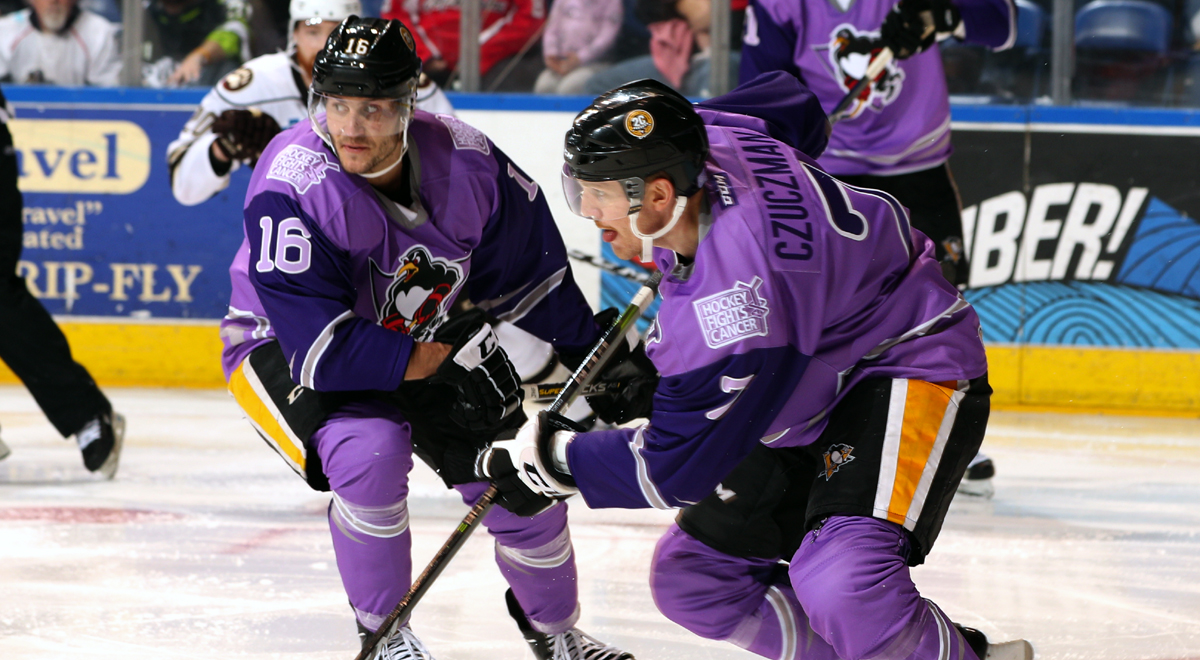 WILKES-BARRE, Pa. – The Wilkes-Barre/Scranton Penguins nearly staged a dramatic comeback, but were instead narrowly defeated by the Hershey Bears, 3-2, at Mohegan Sun Arena at Casey Plaza on Saturday night.

Wilkes-Barre/Scranton (8-7-3-1) scored with the extra attacker to pull within one goal late in the game, and had a few more cracks before time expired and its in-state rival slipped away with the win.

The Penguins and Bears began the first stanza in a heated back-and-forth defensive battle. Both clubs goaltenders shined in the opening frame, with Wilkes-Barre/Scranton’s John Muse stopping several great chances in his Penguins debut. Vítek Vaněček also came up with a handful of key stops for the Bears. The Penguins had three power play opportunities throughout the first, but at the end of 20 minutes, the teams remained deadlocked at 0-0.

Hershey broke the scoring drought at 5:26 of the middle frame during their second man advantage of the matchup when Jayson Megna found a rebound and squeaked it past Muse. The Penguins tied things up as Thomas Di Pauli beat Vaněček at the side of the slot 12:28 into the second period after taking a pass from behind the net from Ryan Haggerty.

The tie score was short-lived, because a little more than a minute Di Pauli’s tally, Hershey’s Sergei Shumakov got a fortuitous bounce off of a Penguins defenseman and his attempted trickled across the goal line.

Mike Sgarbossa put the Bears up, 3-1, at 16:28 of the final frame when he drove one into the top-shelf on Muse. The Penguins did not go quietly as Kevin Czuczman cut the deficit in half with an empty net, extra attacker goal with 45 seconds left in regulation.

Wilkes-Barre/Scranton proceeded to pepper Vaněček with shots in the last minute of regulation, and Adam Johnson was even hauled down on what was perhaps the Penguins’ best scoring chance of the late-game flurry. Johnson drew a hook that resulted in a power play for the Penguins, but with only 10.7 seconds left in the contest, time ran out before they could send the game to overtime.

Muse made 31 saves in net for Wilkes-Barre/Scranton, while Vaněček turned away 25 of 27 shots faced in the win for Hershey.

The Penguins’ next home game is tomorrow, Sunday, Nov. 25 against the Providence Bruins. That game is also the first Kids Free Sunday of the season at Mohegan Sun Arena at Casey Plaza. All children aged 14 and under can see the action free of charge with the paid purchase of an adult ticket. Puck drop for the Penguins and Bruins is scheduled for 3:05 p.m.