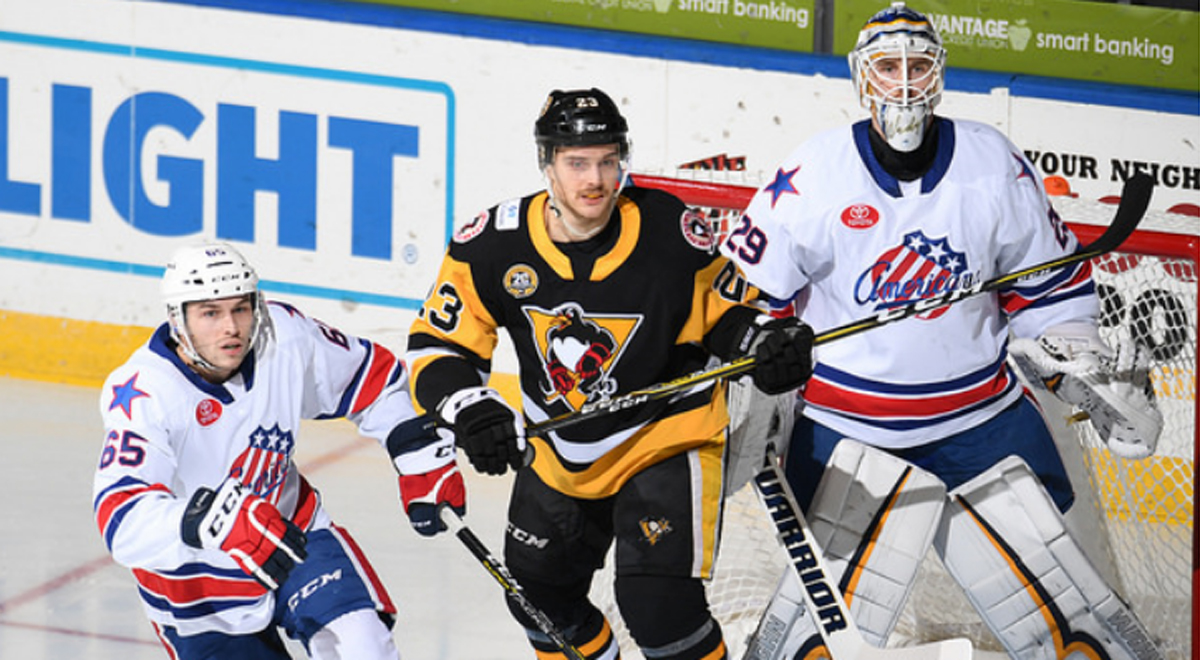 ROCHESTER, N.Y. – The Wilkes-Barre/Scranton Penguins lost to the Rochester Americans, 1-0, in a defensive clash for the ages at Blue Cross Arena on Friday night.

John Muse did his part to keep Wilkes-Barre/Scranton (9-9-3-1) in the game until the very end. In his second game with the black and gold, he recorded 29 saves, but the other goaltender, Scott Wedgewood, stole the win for Rochester with a 35-stop shutout.

Though the opening frame ended in a scoreless tie, both teams made an impression with their quick and aggressive play. The Penguins ripped 16 shots on goal in the first period, three of which came courtesy of Jean-Sébastien Dea who was making his return to the Wilkes-Barre/Scranton lineup after being claimed on waivers by Pittsburgh on Thursday.

Rochester’s Victor Olofsson broke into the scoring column with the game’s only tally at 3:59 of the second period. Muse hung tough in net throughout the rest of the middle frame, including a highlight reel save in the period’s final two minutes. When the Americans completed a pass from the corner to an open player in the slot, Muse reached back with his paddle and pulled the puck off the goal line, keeping the Penguins’ deficit at only one.

Wilkes-Barre/Scranton had its chances in the third period to knot the score, but Wedgewood continually made five-star saves to hold the Penguins at bay. A particular sequence in the game’s final five minutes saw three rapid fire, one-timer cannons from Ryan Haggerty that either struck the crossbar or ended up in Wedgewood’s equipment.

Wedgewood’s heroics continued up until the sound of the final buzzer, handing the Penguins their first shutout loss of the season.

Dea posted a game-high nine shots on goal in the contest.

The Penguins’ next game is tomorrow, Saturday, Nov. 30, when they take the Toronto Marlies at Coca-Cola Coliseum. Wilkes-Barre/Scranton’s next home game is Friday, Dec. 7 against the Cleveland Monsters. Puck drop between the Penguins and Monsters is scheduled for 7:05 p.m.