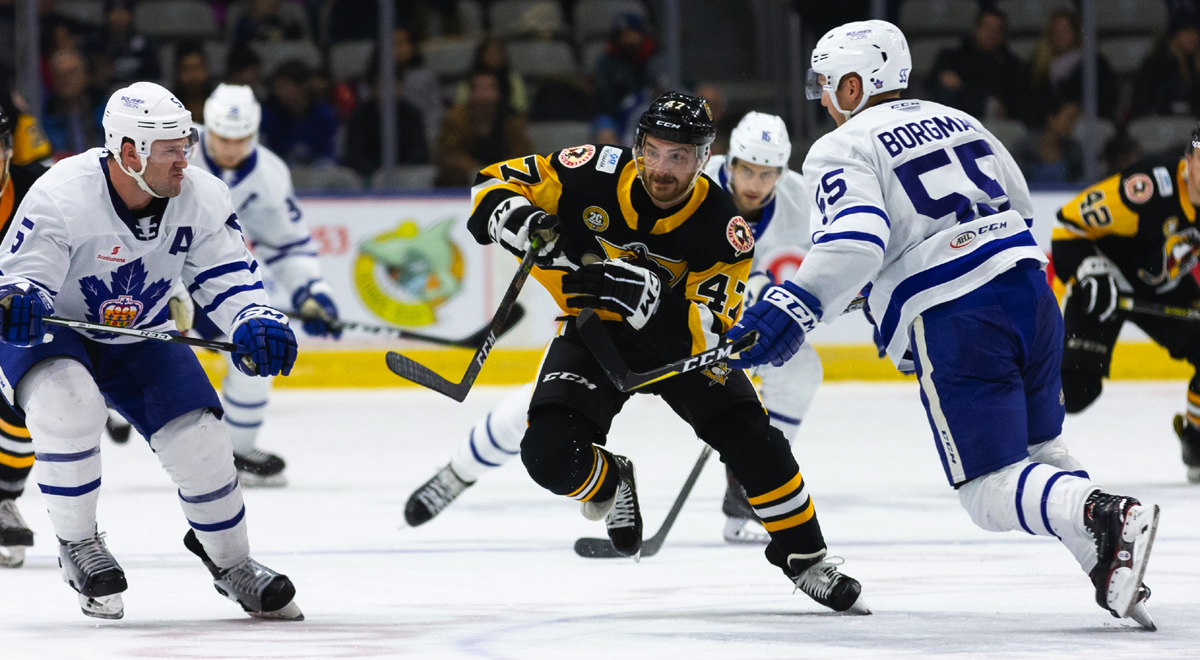 TORONTO, Ont. – The Wilkes-Barre/Scranton Penguins engaged in a high-flying, goal-filled Saturday matinée with the Toronto Marlies and suffered a 7-4 loss at Coca-Cola Coliseum.

Wilkes-Barre/Scranton (9-10-3-1) erupted with two swift strikes early in the first period, but the Marlies’ power play quickly stole the show and gave the home team a lead it never relinquished. The Penguins pressed hard after finding a spark in the third period, but time ran out before they could bring a magical comeback to reality.

The Penguins came out swinging when Jean-Sébastien Dea found Adam Johnson wide open in the slot and Johnson slammed it in just 51 seconds into the contest. Less than three minutes later Anthony Angello buried on a breakaway for his team-leading eighth goal of the season and creating a 2-0 lead for Wilkes-Barre/Scranton

Toronto’s special teams shifted momentum with two back-to-back, five-on-three man advantage tallies and then a go-ahead goal during the run-off power play time from the previous two-man advantage. The Marlies suddenly were ahead, 3-2, and the two clubs had combined for five goals in the first 7:21 of the game.

The second period was far less eventful than the first. However, Toronto broke through when Jeremy Bracco redirected a puck past Anthony Peters for a 4-2 Marlies lead midway through the frame.

Josh Jooris carried the Marlies’ energy into the final stage, scoring a shorthanded goal 16 seconds into the third period. Bracco found another goal with 13:02 left in regulation, making it a 6-2 Toronto advantage.

Undeterred, Ethan Prow played with a purpose during a Penguins mid-period power play and unloaded a slap shot that went sailing into the net. Wilkes-Barre/Scranton proceeded to follow Prow’s lead and pepper Marlies goalie Kasimir Kaskisuo with shot after shot. Linus Ölund tucked in a rebound and cut the deficit down to 6-4 at 14:04 of the third period.

Wilkes-Barre/Scranton continued to furiously test Kaskisuo after Ölund’s tally, mustering 20 shots on goal in the third period. Despite the effort to comeback, Morgan Klimchuk netted the empty netter and sealed the 7-4 victory for the Marlies.

Peters made 24 saves for the Penguins, while Kaskisuo finished the contest with 36 stops on 40 shots faced.

Wilkes-Barre/Scranton returns home on Friday, Dec. 7 to play the Cleveland Monsters. Puck drop between the Penguins and Monsters is scheduled for 7:05 p.m. Friday’s game is also an Eyewitness News Fan Friday, with tickets available for as low as $14 and select draught beers on sale for $2 from 6:00-7:30 p.m.