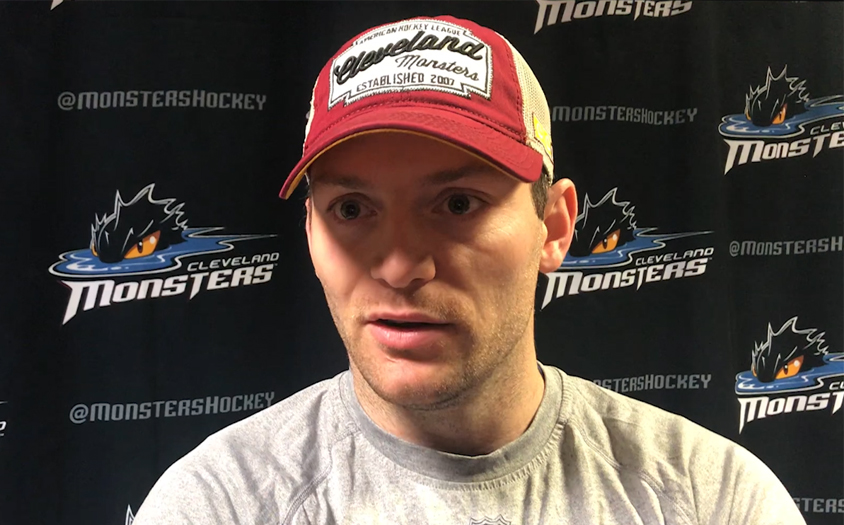 Mark Letestu didn’t envision a 10-year National Hockey League career when he was suiting up for the Western Michigan Broncos back in 2006.  He was more concerned about studying text books than game film.

But after posting a team-leading 46 points, an NCAA high five shorthanded goals, and earning CCHA Rookie of the Year honors, Letestu’s plans of life out in the real world took a sharp turn.

The Pittsburgh Penguins took notice of the speedy forward during his lone season in the college ranks, and signed him to an entry level deal in March of 2006.  He joined the AHL Penguins at the conclusion of Western Michigan’s season, and got his first taste of life in the pros.

“Coming to Wilkes-Barre at the end of that year was a big eye opener,” he said.  “It was probably nine months from when I finished tier II junior in Alberta, to then being in the American Hockey League, the transition wasn’t smooth.  It was hard for me.  Living on my own for the first time really was difficult. But I had the right people there to help me through it and to help me progress.”

The biggest challenges Letestu faced weren’t necessarily on the ice.  It was the mental approach to the game that proved to be a bigger hurdle for the native of Elk Point, Alberta.

“Just the way the lineups were structured then, you only had 11 forwards that could play.  So when I did play I usually played on the fourth line, and [Dennis Bonvie] was there.  He was a guy that would kind of help me through it. I remember [Alain Nasreddine]…those two guys in particular really helped with the off ice stuff particularly.

“The off ice really was what I needed help with, whether it was showing up to the rink with the right mindset, the way to practice.  Those guys really, really helped get my mind right for the years to come.”

Letestu spent most of the 2007-08 season playing on the fourth line with the Penguins.  He posted 18 points in 52 regular season games, and saw action in 12 of the team’s 23 postseason contests, as Wilkes-Barre/Scranton advanced to the Calder Cup Final.

Letestu didn’t understand how special reaching the championship round was back then.  But the 33-year old father of three now sees just what an accomplishment it was.

“At the time, I guess you don’t really realize how rare that is. It’s my first full year in pro hockey and you get to go to the finals.  You think that kind of stuff happens all the time,” he said.  “I haven’t seen the finals since, in any league.  So it was really special to be a part of.

“But for me that was a true team.  It wasn’t that it was bouyed by three or four guys with an incredible skill set.  Not many guys have gone on from that team to have long NHL careers.  It was just a bunch of guys at the right time coming together, accepting roles…It was a lot of fun to be a part of, even in the small role that I was a part of it.”

“I started playing on the power play a little more consistently, maybe playing a little further up in the lineup.  Because at times it becomes a ‘show me’ league,” he said.  “After a couple of years, you’ve got to do something if you want to move on to the next level, or prove your worth.”

Letestu’s persistence paid off during the 09-10 season, when he made his NHL debut with Pittsburgh on November 4 against the Boston Bruins.  He bounced up and down between the big club and Wilkes-Barre a bit, but saw a dream come true on February 1, when he tallied his first NHL goal against Ryan Miller and the Buffalo Sabres.

“Sometimes being yo-yoed between Wilkes-Barre and Pittsburgh with a car service, it’s a long drive. But it’s worth it,” he said.  “I still remember TK – Tyler Kennedy, there’s so many TKs in Wilkes-Barre – he’s the guy that gave me the pass, three-on-one for that first goal.  That’s probably my favorite moment in hockey, scoring the first goal.”

Letestu spent the entire  2010-11 season in Pittsburgh, and established himself as an NHL regular for the next decade with the Columbus Blue Jackets and his hometown Edmonton Oilers.

“Playing at home is a different experience,” he recalled.  “They’d just drafted Connor McDavid.  So there was a real buzz around the team.  And to be home in front of family, I’ve got a small family now myself, so being around grandparents was good.  But as everything, time moves on, and your career pushes you to different places.”

Letestu started the 2018-19 season as a free agent, but signed a two-way deal with the Blue Jackets just before the year go underway.  Even though he’s back in the AHL for the first time in a decade, he’s extremely thankful to be playing the game he loves for a living.

“I have a seven year old boy Caleb, a five year old boy Dylan, and a three year old girl Blake,” he smiled.  “Columbus has been good to me as far as allowing family to be part of things.  They’re around the rink a lot, they get to come out and skate.  Not so much my daughter, she’s a real, true princess at heart.

“We’ve really kind of grown a lot here in Ohio as far as a family, and the stability that hockey has given me has allowed us to provide a pretty comfortable life for them.”

This weekend, after nine years away, Letestu will be back on the Mohegan Sun Arena ice, this time suiting up against the Penguins.  But he still has fond memories of his time breaking into the pro ranks.

“The people in Wilkes-Barre were always willing to help.  To me it’s a true community team,” he said.  “They love the Penguins…that’s what my fondest memory of it is, the community feel and aspect of that team is something I’ve rarely felt anywhere else.”