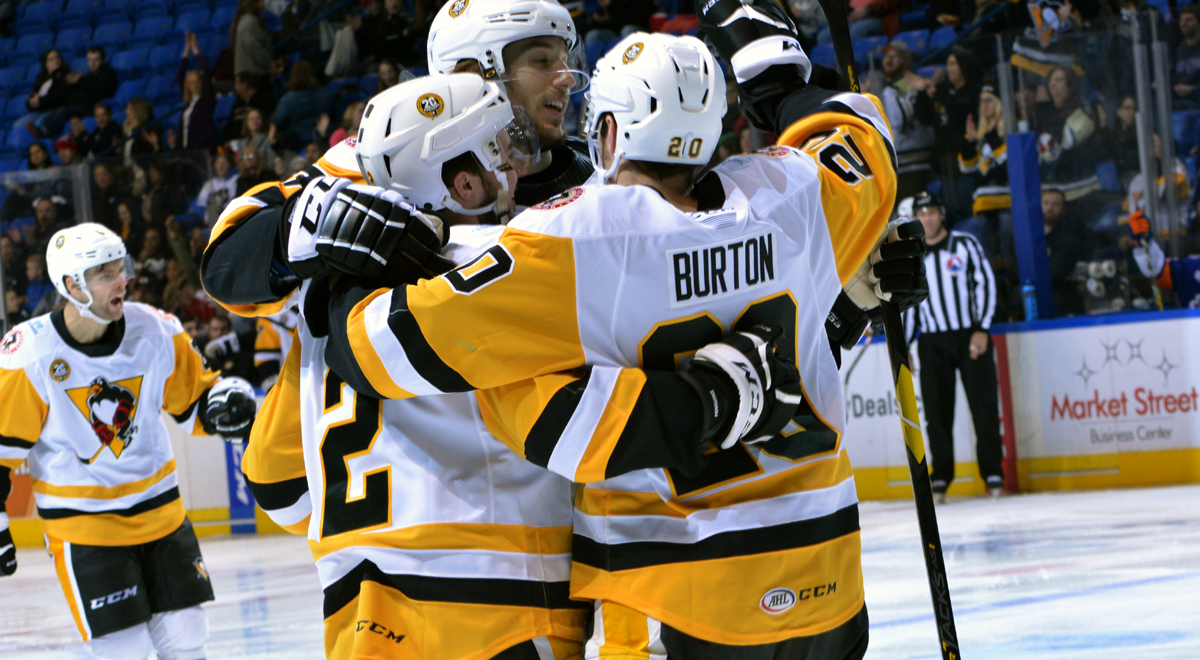 WILKES-BARRE, Pa. – The Wilkes-Barre/Scranton Penguins came from behind to defeat the Bridgeport Sound Tigers, 3-1, at Mohegan Sun Arena at Casey Plaza on Saturday afternoon.

Wilkes-Barre/Scranton (11-10-3-1) was held off the scoresheet for the first two periods of the matchup, but rallied for three third period goals to blow past their Atlantic Division foe.

The Penguins and Sound Tigers started the first stanza in an offensive struggle as both teams had trouble generating consistent scoring chances. Eventually, two quick trips to the penalty box cost the Penguins as Otto Koivula tipped in a power play goal for Bridgeport at 17:12 of the opening period.

Wilkes-Barre/Scranton turned up the heat in the middle frame, recording 17 shots on goal. However, Bridgeport netminder Jeremy Smith turned all 17 of those bids aside, including several sprawling saves that left the Penguins shaking their heads in disbelief.

Jeff Taylor broke through for the Penguins with his first AHL goal at 1:47 of the third period. A minute and a half later, Ethan Prow crept down from his usual position at the point and banged in a rebound, giving Wilkes-Barre/Scranton a sudden 2-1 lead.

After a hard pushback from Bridgeport and a handful of excellent saves by Penguins goalie Anthony Peters, Teddy Blueger sealed the victory by adding an empty netter with 1:13 left in regulation.

Peters made 21 saves for the Penguins, while Smith turned away 29 of 30 shots faced for the Sound Tigers.

Wilkes-Barre/Scranton’s next game is tomorrow, Sunday, Dec. 8, against the Hershey Bears down at Giant Center. The Penguins’ next home contest is Saturday, Dec. 15, and it’s Teddy Bear Toss Night against the Lehigh Valley Phantoms. Puck drop between the Penguins and Phantoms is scheduled for 7:05 p.m.