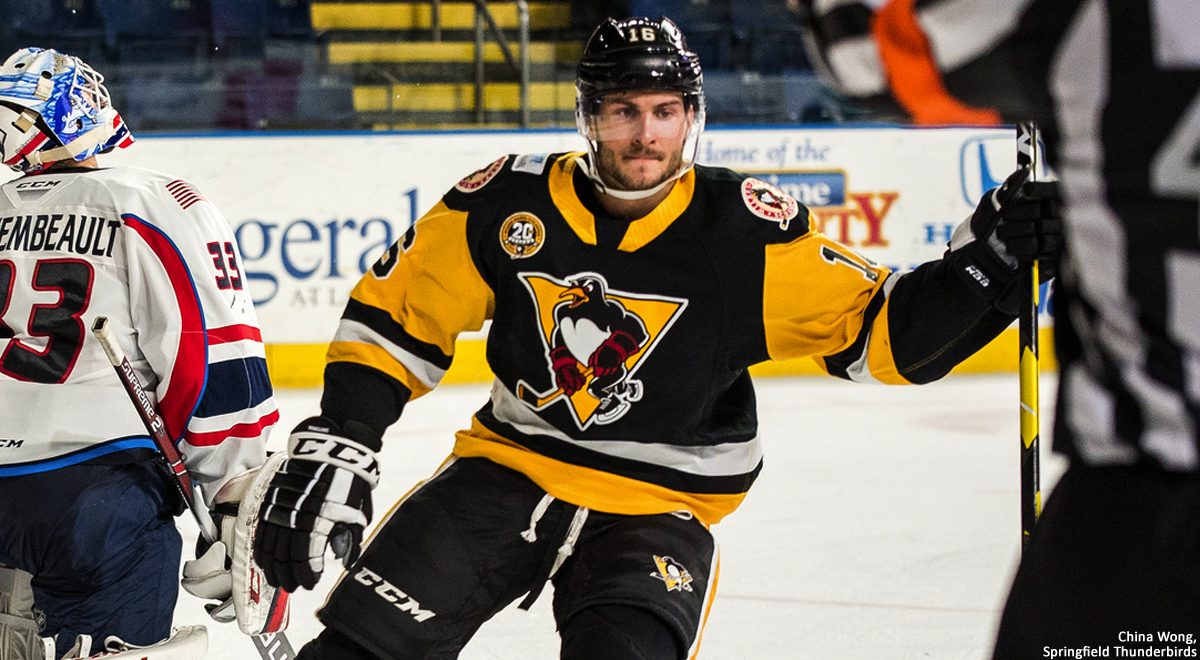 SPRINGFIELD, Mass. – The Wilkes-Barre/Scranton Penguins won their fourth game in a row by going a perfect three-for-three in the shootout and beating the Springfield Thunderbirds, 2-1, at MassMutual Center on Wednesday night.

Adam Johnson, Thomas Di Pauli and Ben Sexton all converted on their shootout attempts to power the Penguins to victory. Wilkes-Barre/Scranton (13-10-3-1) also received a big boost from goalie Tristan Jarry, who was reassigned to the AHL less than 24 hours before puck drop in Springfield.

The first period saw high shot volume for both teams, with both teams’ goalies making exceptional saves. At one point, Jarry laid out for a two-pad stack stop on Sebastian Repo, and then followed that up by reaching his glove into the air and denying Jayce Hawryluk on the rebound. Eventually, the Thunderbirds beat Jarry when Blaine Byron’s net-front pass deflected off of a Penguins player and in with 3:08 left in the opening frame.

Johnson notched Wilkes-Barre/Scranton’s only goal of regulation while his team was on the man advantage during the second period. Jimmy Hayes corralled a rebound and threw it to a wide open Johnson, who slammed it across the goal line at 8:44 of the second stanza. Meanwhile, the Penguins limited the T-Birds to a mere three shots in the middle frame, the fewest allowed by Wilkes-Barre/Scranton in a period this season.

Jarry remained in control of his crease in the third period as well, and his timely saves held off Springfield until the end of regulation. With a knotted score of 1-1 after 60 minutes, the teams headed to overtime.

Wilkes-Barre/Scranton was given a power play during the extra frame, but no goals materialized for other side. Onto the shootout they went, during which the Penguins went three-for-three on their opportunities.

Jarry finished his excellent night with saves on 34 of 35 shots faced in regulation and overtime, then added another stop during the shootout. A heavily tested Samuel Montembeault denied 41 shots for Springfield, but did not record a save during the shootout.

Wilkes-Barre/Scranton’s next game is Saturday, Dec. 15 against the Lehigh Valley Phantoms. Saturday’s game also serves as the Penguins’ annual Teddy Bear Toss. Fans are encouraged to bring new, unwrapped stuffed animals to throw on the ice after the team’s first goal. All toys will be donated to children in need this holiday season through the Tobyhana Army Depot’s Operation Santa Claus. Puck drop between the Penguins and Phantoms is scheduled for 7:05 p.m. at Mohegan Sun Arena at Casey Plaza.