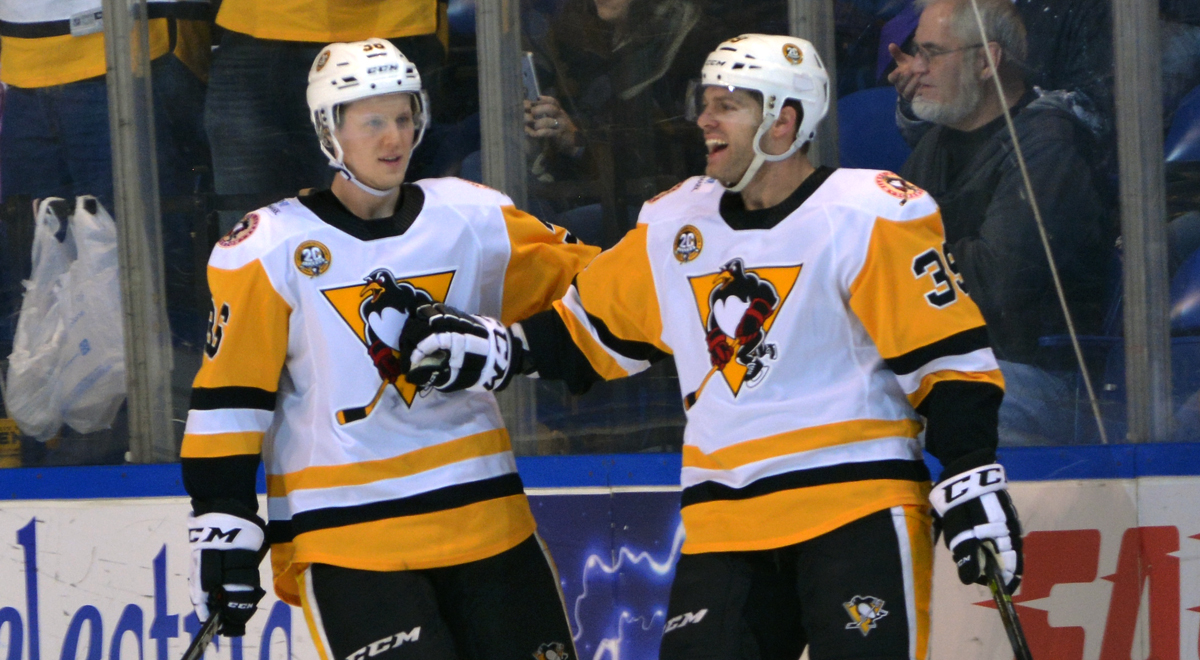 WILKES-BARRE, Pa. – The Wilkes-Barre/Scranton continued their winning ways with a resounding 5-2 victory over the Lehigh Valley Phantoms at Mohegan Sun Arena at Casey Plaza on Saturday night.

The Penguins started the contest by out-shooting the Phantoms, 13-3, in the first period. Each time they came close to scoring, Carter Hart turned them aside. Both clubs came away empty handed in the opening frame, but that all changed in the second period.

Lehigh Valley’s Philip Samuelsson snuck a wrister past Tristan Jarry at 1:57, giving the Phantoms the first lead of the game. That lead was short-lived, however, as Teddy Blueger found a hole in the Lehigh Valley defense and finished on a shorthanded breakaway minutes after Samuelsson put the Phantoms ahead. Blueger’s goal elicited the fans to commence the Teddy Bear Toss, throwing new, unwrapped stuffed animals onto the ice.

After the teddy bear clean up was complete, Haggerty continued to pile it on for Wilkes-Barre/Scranton by scoring his first two goals of the contest at 10:32 and 14:23 of the second stanza.

Mike Vecchione provided a tunicate to stop the bleeding for the Phantoms by putting one across the goal line with five minutes left before the second intermission. Vecchione’s late-period tally cut the Penguins’ lead down to 3-2.

Wilkes-Barre/Scranton came up with three clutch penalty kills during the third period, including another shorthanded goal from Sam Lafferty. Haggerty provided the final dagger for the Penguins with the hat trick-clinching goal coming on an empty net.

Haggerty’s empty netter continued a run of the Penguins scoring a hat trick in every one of their Dad’s Trips games, dating back to last season. Haggerty had his first career hat trick at the start of the team’s first ever Dad’s Trip, then Andrey Pedan followed that up with a hatty the next day. Haggerty’s three goals tonight secured a perfect three-for-three in Dad’s Trip hat tricks in team history.

All of the stuffed animals thrown onto the ice following Blueger’s second period goal were collected by Operation Santa Claus, an organization out of the Tobyhana Army Depot that will donate all of the toys to children in need this holiday season.

Wilkes-Barre/Scranton’s Dad’s Trip continues tomorrow in Connecticut, as it takes its five-game win streak to Webster Bank Arena for a Sunday matinée matchup with the Bridgeport Sound Tigers. The Penguins return to Mohegan Sun Arena at Casey Plaza for their next home game on Wednesday, December 19, to once again face the Sound Tigers. Puck drop between the Penguins and Sound Tigers on Wednesday is scheduled for 7:05 p.m.