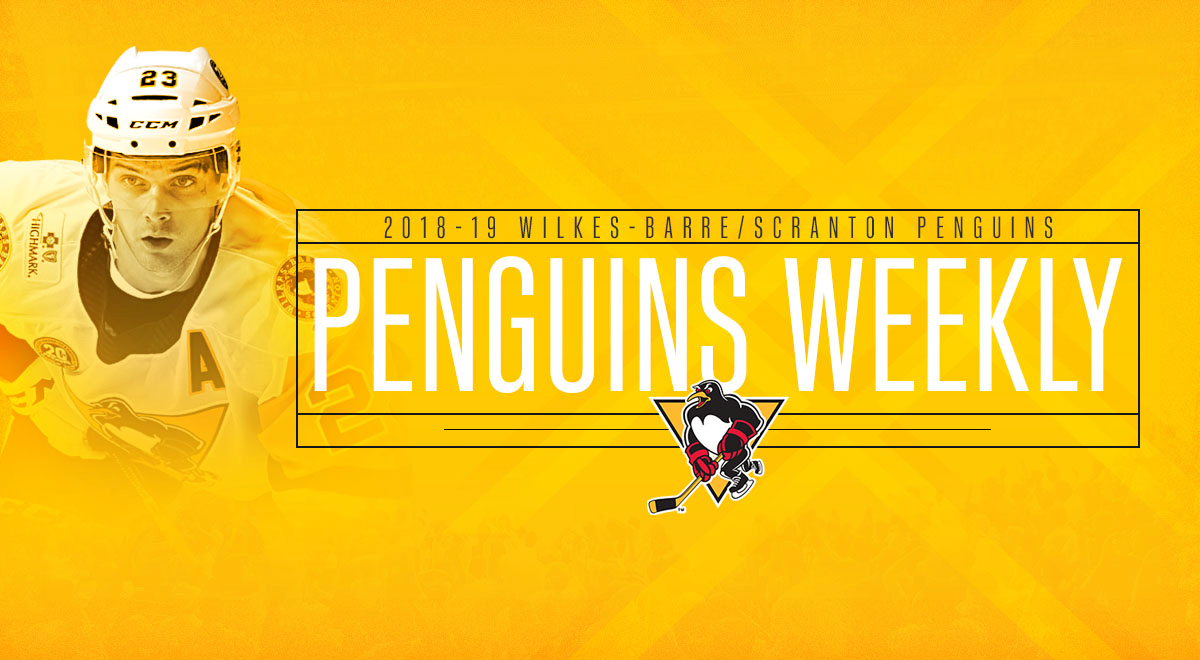 Wednesday, Dec. 12 – PENGUINS 2 at Springfield 1  (SO)
The Penguins prevailed over Springfield in shootout fashion for the second time this season against the Thunderbirds. Adam Johnson, Thomas Di Pauli and Ben Sexton all scored on consecutive shootout attempts to seal the victory.

Saturday, Dec. 15 – PENGUINS 5 vs. Lehigh Valley 2
Ryan Haggerty scored a hat trick to kick off the Penguins’ second annual Dads’ Trip. Teddy Blueger knocked in the game’s first tally and appropriately brought on the Teddy Bear Toss, a charitable promotion in which fans throw stuffed animals onto the ice after the home team’s first goal. All toys were donated to Tobyhana Army Depot’s Operation Santa Claus and will be given to children in need this holiday season.

Sunday, Dec. 16 – PENGUINS 0 at Bridgeport 1
The Dads’ Trip concluded with a loss at the hands of the Bridgeport Sound Tigers. The defeat marked the end of a five-game winning streak for Wilkes-Barre/Scranton.

Wednesday, Dec. 19 – PENGUINS vs. Bridgeport
The Penguins will look to avenge their loss from three days prior when they host the Sound Tigers at Mohegan Sun Arena at Casey Plaza. Bridgeport’s Chris Bourque has recorded a point in each of the three meetings between the two clubs.

Friday, Dec. 21 – PENGUINS at Hershey
Wilkes-Barre/Scranton treks down I-81 to take on Hershey for the seventh time this season. The Penguins are 9-1-1-1 in their last 12 visits to Giant Center.

– The Penguins’ five-game win streak was their longest such streak since they won eight games in a row from Dec. 29 to Jan. 17 last season.

– In the past two seasons, Wilkes-Barre/Scranton has played four Dads’ Trip games. In three of those games, the Penguins have scored a hat trick.

– Ben Sexton scored the first shootout goal of his AHL career in his first game with the Penguins on Wednesday at Springfield.

– The Pens’ Wednesday shootout win was the first time they went three-for-three in a shootout since Jan. 5, 2011 at Charlotte.