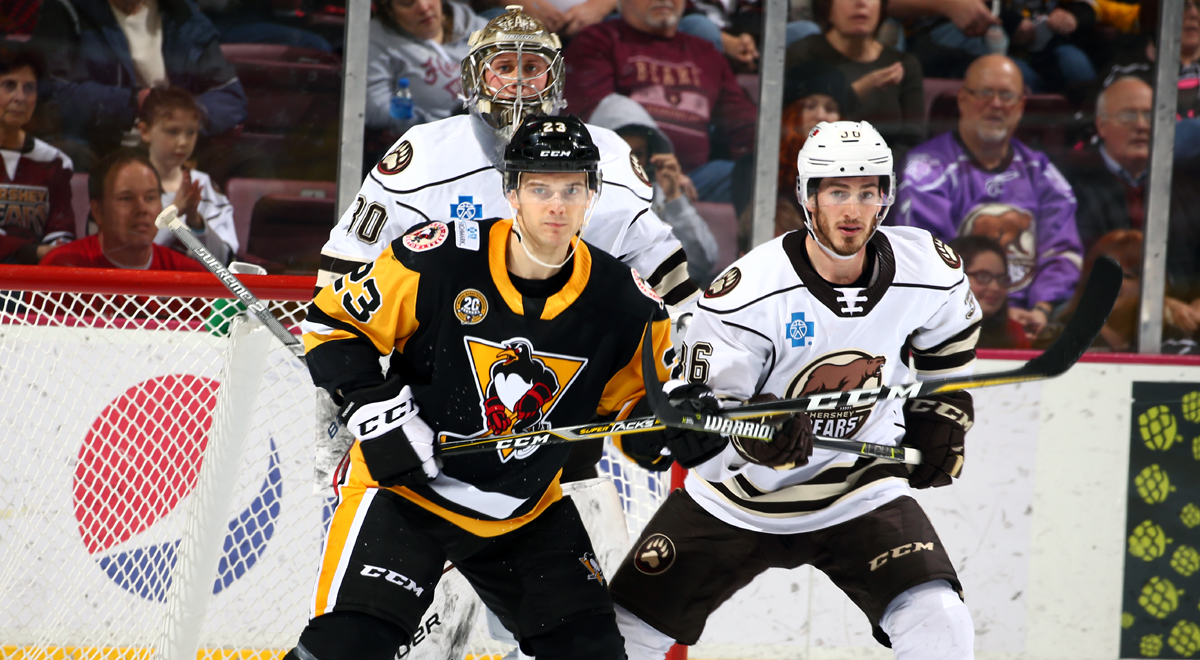 HERSHEY, Pa. – The Wilkes-Barre/Scranton Penguins narrowly lost a 3-2 game to the Hershey Bears at Giant Center on Friday night.

Wilkes-Barre/Scranton (15-12-3-1) did not allow a goal at even strength in the loss, but saw its opponent tally three times on the man advantage to steal the victory. Riley Barber factored in on all of Hershey’s scoring with three points (1G-2A), including the game-winning goal.

The Penguins started hot with Jean-Sébastien Dea sniping the top right corner of the Bears’ net just 67 seconds into the contest.

Hershey then put together back-to-back power play goals courtesy of Mike Sgarbossa and Nathan Walker to take a 2-1 lead, but Wilkes-Barre/Scranton responded with a two-man advantage marker by Teddy Blueger at 10:43 of the first period to even things up at two goals apiece.

The second stanza looked like it was going to pass without anymore scoring until the Bears capitalized on another power play late in the frame. With less than two minutes remaining before the intermission, Riley Barber ripped a low wrist shot into the Penguins’ cage and restored a 3-2 lead for the home team.

The Penguins opened the third period with a power play and quickly came close to evening the score once again. Blueger was set up for a redirection in the slot and the puck caromed from his stick to the post where it sat before the Bears defense swiped it away.

Wilkes-Barre/Scranton continued to furiously swarm Hershey’s net with scoring chances, but Vítek Vaněček was up to the task every time. Perhaps Vaněček’s finest save of the night came late in the final frame on Sam Lafferty, who wriggled his way around a Bears defender and was denied on his first chance and then the rebound as Hershey’s goalie tracked him from post-to-post.

When the final buzzer rang, Vaněček had made 26 saves to get his team the win. Anthony Peters posted 30 stops in the loss for the Penguins.

Wilkes-Barre/Scranton’s next game is tomorrow, Saturday, Dec. 22, when it visits the Syracuse Crunch for the first time this season. The Penguins’ next home game is the day after Christmas, Wednesday, Dec. 26, against the Lehigh Valley Phantoms. Puck drop between the Penguins and Phantoms is scheduled for 7:05 p.m.