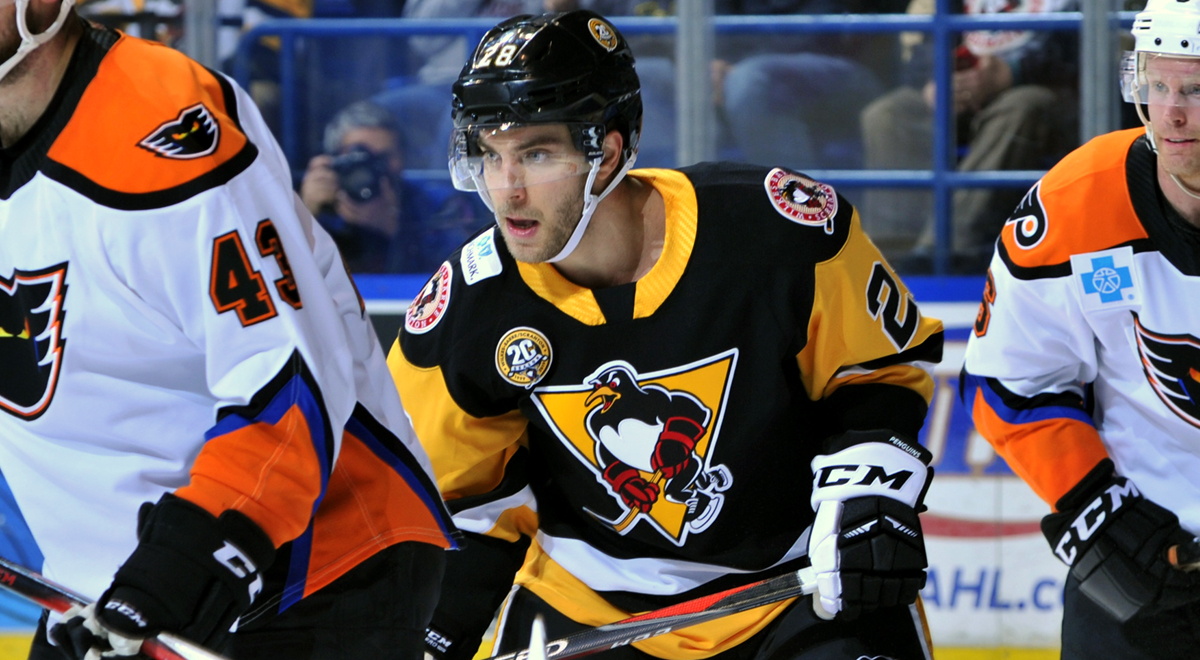 WILKES-BARRE, Pa. – The Wilkes-Barre/Scranton Penguins were defeated by the Lehigh Valley Phantoms, 5-3, at Mohegan Sun Arena at Casey Plaza on Wednesday night.

Wilkes-Barre/Scranton (15-13-4-1) got off to a hot start as Ben Sexton scored a pair of first period goals for his first tallies in a Penguins uniform. However, a late offensive flurry by the Phantoms put them over the edge and stole away the victory.

Sexton struck first for Wilkes-Barre/Scranton, burying a rebound at 14:45 of the opening frame. Then with 2.3 seconds remaining in the first stanza, Sexton snuck in a shot at an impossible angle, extending his team’s lead to 2-0.

The second period saw two successful penalty kills by the Penguins, who seemed poised to enter the intermission with their 2-0 lead intact. Instead, Tyrell Goulbourne whipped a shot off the post and in at 17:58 of the middle frame to cut Wilkes-Barre/Scranton lead in half.

The Penguins reestablished their two-goal lead with only 5.3 seconds left in the second period. The puck took a funny bounce off of the glass and spit right out into the slot, and with Alex Lyon vacating the net in an attempt to track the puck’s initial path behind his net, an off-balance Teddy Blueger found a way to steer the bouncing biscuit into the Phantoms’ open net.

The Phantoms quickly fired back in the third period when Taylor Leier redirected a point shot from Philippe Myers 2:38 into the frame. The equalizer came roughly 11 minutes later, with Connor Bunnaman’s breakaway tally evening the score at three goals apiece.

With time ticking down in regulation, Goulbourne fired the winning tally into the Penguins’ net with just over a minute remaining in the game. Philip Samuelsson delivered an insurance marker seven seconds later with a dump in that veered around Tristan Jarry and then back towards the net and across the goal line to solidify the final score.

Wilkes-Barre/Scranton’s next home game is on Friday night, Dec. 28, when they take on another Keystone State rival, the Hershey Bears. Friday’s game also serves as an Eyewitness News Fan Friday with lower bowl tickets available for just $14 and select draught beers on sale for $2 from 6:00 – 7:30 p.m. Puck drop between the Penguins and Bears at the Mohegan Sun Arena at Casey Plaza is scheduled for 7:05.