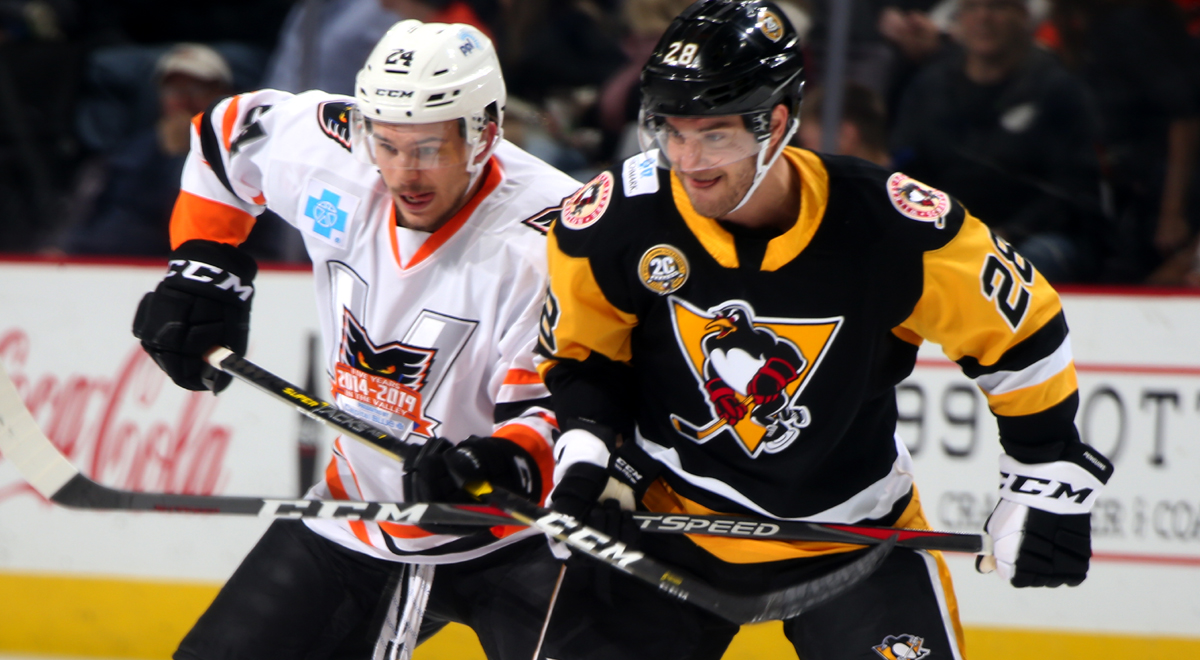 Wilkes-Barre/Scranton (16-14-4-1) unloaded five-straight goals throughout the second and third periods to establish an insurmountable lead. The Phantoms ultimately out-shot the Penguins, 35-32, thanks in large part to a flurry in the final frame, but were stymied by Tristan Jarry at most every turn.

The first period ended in a 0-0 tie, but didn’t pass without action. The two clubs totaled 52 combined penalty minutes, including fights between Anthony Angello and Philip Samuelsson as well as Garrett Wilson and Tyrell Goulbourne.

The Phantoms were the first to score in the second period, with Greg Carey notching a power play goal 1:34 into the frame. Wilkes-Barre/Scranton quickly reciprocated with two goals in quick succession. Ben Sexton and Jimmy Hayes tallied at 3:44 and 4:30 of the second period, respectively, flipping the game back in the Penguins’ favor.

Teddy Blueger extended the team’s lead to 3-1 with a power-play goal at 14:40 of the second period. That lead improved to 4-1 when Adam Johnson buried a backhand shot over the glove of Lehigh Valley’s Alex Lyon five minutes into the final frame.

Blueger tacked on another one for Wilkes-Barre/Scranton’s fifth goal in a row midway through the third period by taking advantage of a Phantoms turnover. However, Reece Willcox seized a rebound opportunity and got one back for the Phantoms 35 seconds after Blueger’s second goal of the night.

From there, the Penguins and Phantoms traded goals in the latter stages of the game, with Sexton and Chad Ruhwedel scoring on an empty net and T.J. Brennan putting an extra one past Jarry.

Jarry recorded 32 saves in the win for the Penguins, while Lyon finished the night having made 25 saves on 30 shots faced.

Wilkes-Barre/Scranton’s next game is a New Year’s Eve battle against the Binghamton Devils at Floyd L. Maines Veterans Memorial Arena on Monday, Dec. 31. The Penguins’ next home game is on Friday, Jan. 4 against the Grand Rapids Griffins. Grand Rapids’ only visit to Mohegan Sun Arena at Casey Plaza this season also serves as an Eyewitness News Fan Friday with lower bowl tickets available for just $14 and select draught beers on sale for $2 from 6:00 – 7:30 p.m. Puck drop between the Penguins and Griffins is scheduled for 7:05 p.m.