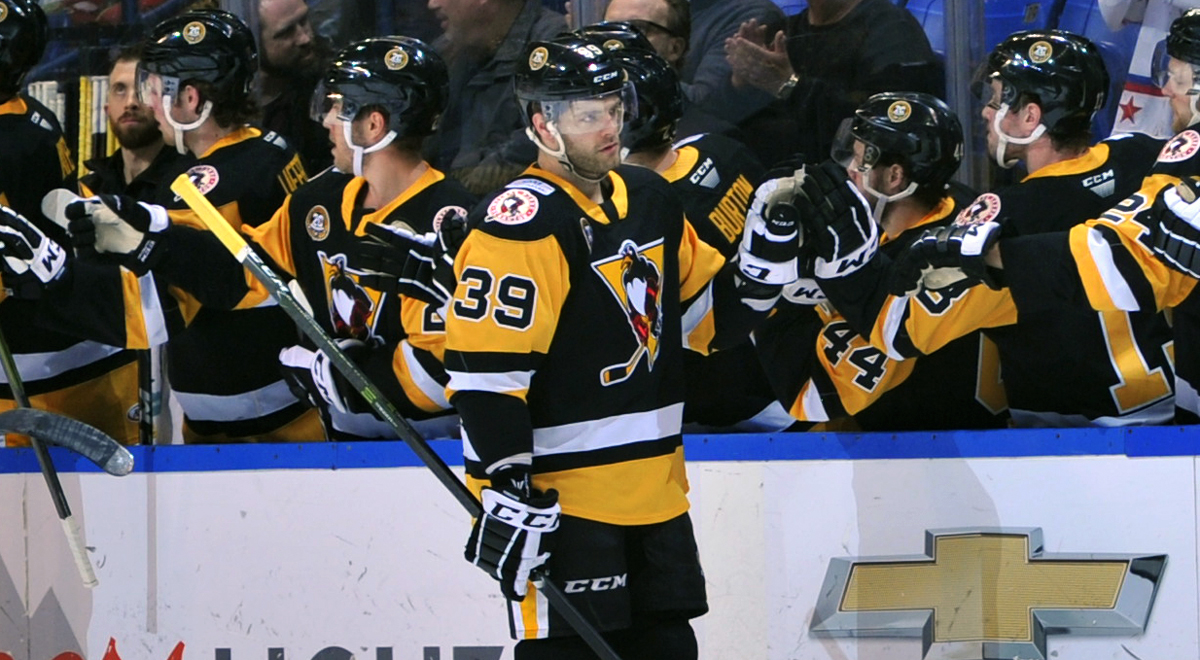 WILKES-BARRE, Pa. – The Wilkes-Barre/Scranton Penguins won their first game of 2019 with a 3-2 shootout triumph over the Grand Rapids Griffins at Mohegan Sun Arena at Casey Plaza on Friday night.

Ryan Haggerty scored twice in regulation, and Joseph Cramarossa buried the shootout-deciding goal to propel Wilkes-Barre/Scranton (18-14-4-1) to victory in this nail-biting matchup against a Western Conference foe.

Only 17 seconds into the contest, Penguins forward Ryan Haggerty easily slipped the puck into the Griffins’ net after fishing a rebound off the pads of Grand Rapids goalie Patrik Rybár. Rybár had a hard time tracking the puck after it changed directions in the slot following a set-up at the blueline by Chad Ruhwedel and Tim Erixon.

The Griffins managed to get on the scoreboard and tie the game at 3:45 of the first period with a goal off of a set face-off play finished by Matthew Ford.

Haggerty earned his second of the night 6:24 into the second stanza, which was again assisted by Erixon. The Swedish defenseman delivered a pass to Haggerty in the neutral zone, who darted to the middle of the ice from the left-side wall and ripped a shot past Rybár’s blocker. The Penguins’ lead was short-lived once again, as the Griffins answered back four minutes later with a goal by Turner Elson.

The Penguins earned a four-minute power play later in the second period, but after seeing a Griffins penalty killer snap his stick and several posts struck by Penguins shooters, their lengthy man advantage was unsuccessful. During that sequence, Grand Rapids earned a shorthanded breakaway, and Tristan Jarry came up with a crucial save for Wilkes-Barre/Scranton.

The third period ended with four consecutive successful penalty kills by the Penguins and many excellent scoring chances for both clubs, but none found the back of the net. Overtime was full of glorious scoring opportunities as well, but after five minutes of three-on-three, the game required the shootout to determine a winner.

Cramarossa scored the decisive goal for the Penguins in the third round of the shootout, improving to two-for-two on shootout attempts this season with both conversions being game-winning goals.

Wilkes-Barre/Scranton’s next game is tomorrow, Saturday, Jan. 5, against the Milwaukee Admirals at Mohegan Sun Arena at Casey Plaza. Puck drop between the Penguins and Admirals is scheduled for 7:05 p.m.