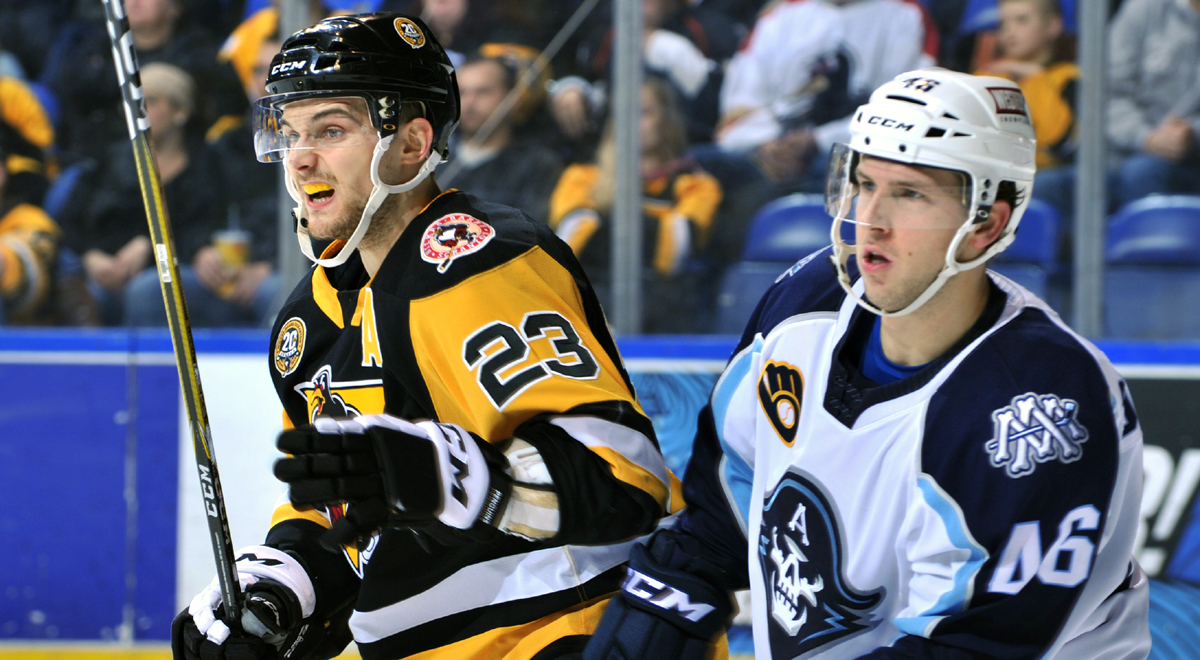 WILKES-BARRE, Pa. – Despite vying for a comeback in the third period, the Wilkes-Barre/Scranton Penguins were defeated by the Milwaukee Admirals, 5-3, at Mohegan Sun Arena at Casey Plaza on Saturday night.

Wilkes-Barre/Scranton (18-15-4-1) and its opponent were neck-and-neck for the early stages of the game, but the scales tilted in the visitors’ favor during the middle frame. Milwaukee’s Emil Pettersson had a three-point night (2G-1A) that kept the Penguins from storming back.

The Penguins established a lead by striking first on a first period power play. Anthony Angello unleashed a bullet shot that blazed past Admirals goalie Troy Grosenick at 13:39 of the opening stanza.

Pettersson started his tear by scoring on a shorthanded breakaway 3:45 into the middle frame. The two clubs remained tied, 1-1, until Nicholas Baptiste sent the puck to the back of the net at 8:47 of the second period. Jarred Tinordi further increased the lead for Milwaukee to 3-1 by scoring roughly six minutes before the second intermission.

The Admirals posted an early third period man advantage marker from Tanner Jeannot, but that only seemed to spark the Penguins’ fury. Wilkes-Barre/Scranton rolled out two quick goals scored by Jean-Sébastien Dea and Teddy Blueger shortly thereafter. The Penguins forwards tucked their shots in less than two minutes apart, and the game was suddenly 4-3.

Dea and Blueger’s third period goals forced Milwaukee coach Karl Taylor to call his timeout. This proved to be an effective strategy by the Admirals’ bench boss, because Pettersson scored again right out of the break and increased their lead back to 5-3.

Wilkes-Barre/Scranton’s Anthony Peters recorded 25 saves on 30 shots faced, while Grosenick stopped 31 of the 34 shots the Penguins threw his way.

Wilkes-Barre/Scranton will take a flight down to North Carolina for its next game on Jan. 11 against the Charlotte Checkers. The Penguins’ next home game is on Friday, Jan. 18 against the Rochester Americans. The Amerks’ lone visit to Mohegan Sun Arena at Casey Plaza this season also serves as an Eyewitness News Fan Friday with lower bowl tickets available for just $14 and select draught beers on sale for $2 from 6:00 – 7:30 p.m. Puck drop between the penguins and Amerks is scheduled for 7:05 p.m.