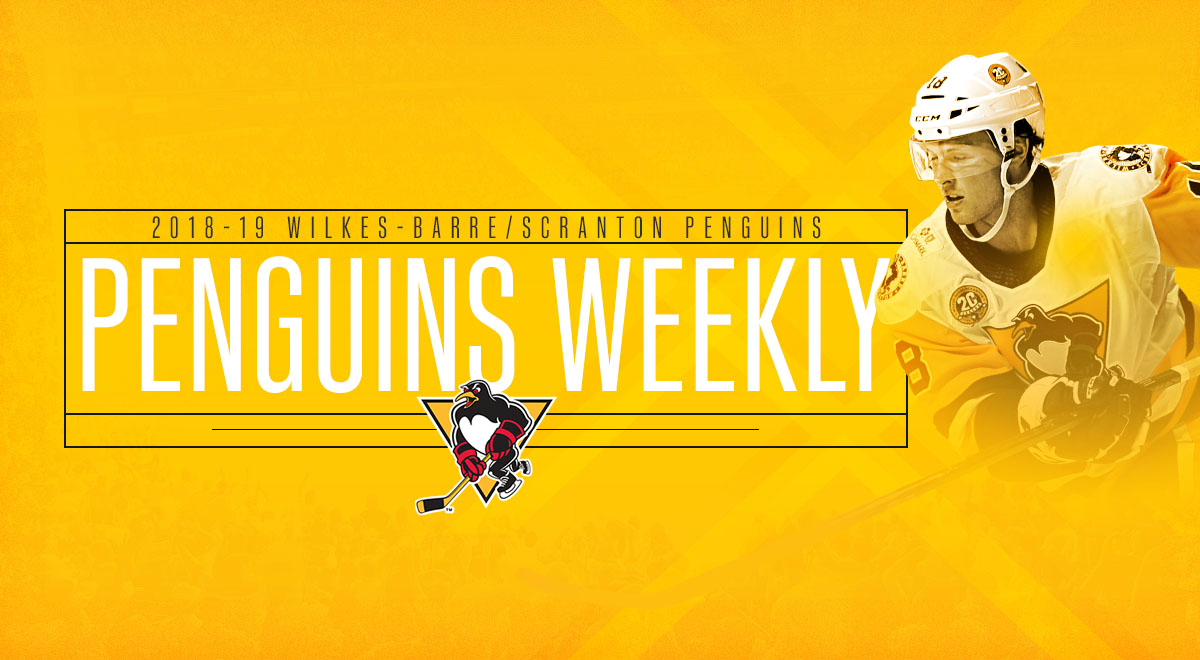 Friday, January 4 – PENGUINS 3 vs. Grand Rapids 2
Wilkes-Barre/Scranton fought hard to win their first game of 2019, which ended in a shootout against the Grand Rapids Griffins. Ryan Haggerty tallied twice in regulation, while Joseph Cramarossa buried the game-winning goal in the third round of the shootout. Penguins goalie Tristan Jarry had 28 saves in regulation and overtime, then followed that up by going three-for-three on stops in the shootout.

Saturday, January 5 – PENGUINS 3 vs. Milwaukee 5
The Penguins fell to the Admirals despite nearly staging a comeback in the third period. Anthony Angello gave Wilkes-Barre/Scranton the lead with a first period power play goal, but Milwaukee got the edge by notching three goals in the second stanza. Jean-Sébastien Dea and Teddy Blueger quickly lit the lamp in the third, but the Penguins were unable to pull even with the Admirals.

Friday, Jan. 11 – PENGUINS at Charlotte
The Penguins embark on a two-game road trip against the Checkers, who currently hold the best record in the AHL (27-8-3-0). Wilkes-Barre/Scranton hosted Charlotte at Mohegan Sun Arena at Casey Plaza twice earlier this season, but narrowly lost both games by thin, one-goal margins. Charlotte All-Star selection Trevor Carrick recorded five points, all assists, during the two previous games against the Penguins.

Saturday, Jan. 12 – PENGUINS at Charlotte
The Penguins continue their back-to-back set against the league’s top team, which also happens to be tied for the most goals in the AHL this season (133). Wilkes-Barre/Scranton is 5-1-0-0 all-time at Bojangles’ Coliseum in the regular season, with Charlotte snapping its five-game skid at home against the black and gold in the Penguins’ last visit on Mar. 14, 2018.

– Wilkes-Barre/Scranton has won six-straight times in their first game of a New Year.

– Sam Lafferty is tied for the second-most assists amongst league rookies (19).

– Teddy Blueger has six goals and seven points in his last six games.

– Anthony Angello is tied for the league’s best plus/minus rating amongst rookie forwards (+15).

– Kevin Czuczman played in his 300th AHL game on Saturday, Jan. 5 vs. Milwaukee.