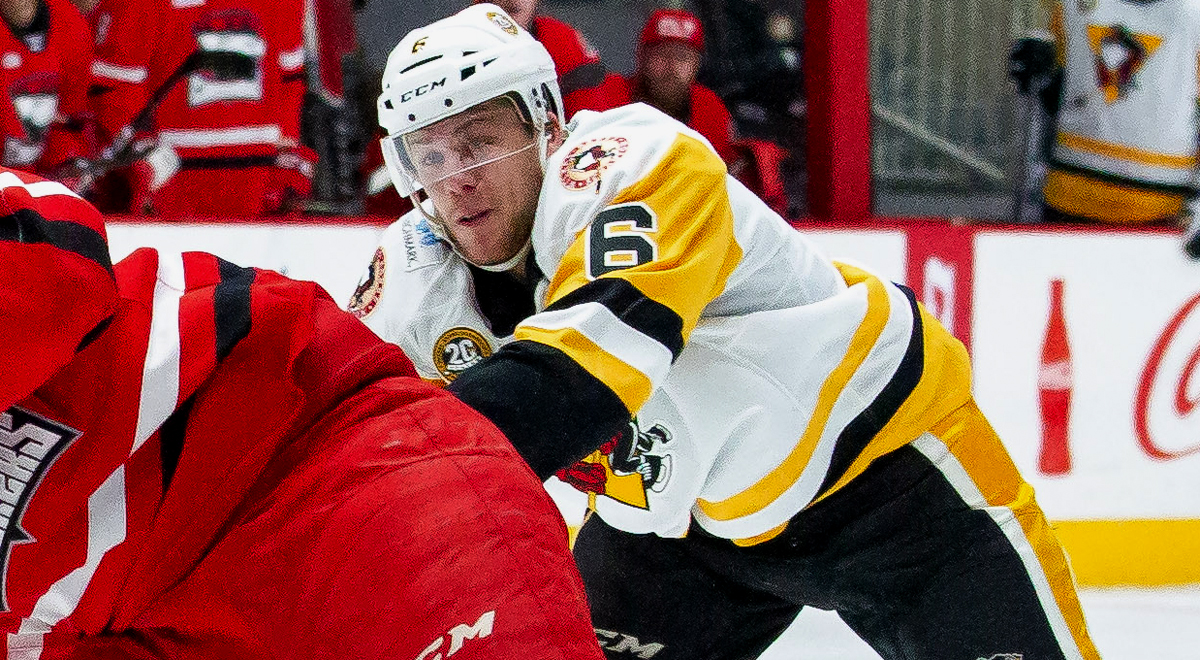 Wilkes-Barre/Scranton (19-15-4-1) got off to a hot start with three goals in the first period and was able to hold back its opponent’s high-octane offense throughout the rest of the contest.

The first goal of the night was scored less than three minutes into the game courtesy of Penguins center Jarrett Burton. His third tally of the year came out of a net-front scramble following a cannonading point shot unleashed by Ethan Prow.

Wilkes-Barre/Scranton extended its lead with a shorthanded goal from Linus Ölund at 9:40. On the remaining power play time that Charlotte had to work with following the Ölund goal, Tristan Jarry faced a barrage of shots and steered all of them aside. Jarry ultimately wrapped up the first period with 15 saves on 15 shots faced.

Wilkes-Barre/Scranton found the back of the net for the third time in the opening frame when Anthony Angello deposited a rebound at 16:27, created by another drive from Prow. Angello’s 12th goal of the season prompted Charlotte to pull veteran goalie Scott Darling and replace him with Alex Nedeljkovic.

It didn’t take long for the Penguins to solve Nedeljkovic in the second period. Teddy Blueger buried his team-leading 17th goal of the year a mere 39 seconds into the middle frame, giving Wilkes-Barre/Scranton a commanding 4-0 lead.

The Checkers eventually notched their first tally of the game midway through the second stanza with a goal by Andrew Poturalski, shortening the Penguins lead, 4-1.

Jean-Sébastien Dea elevated the Penguins’ lead to 5-1 with six minutes left in the final period on a power play goal set up by Prow, giving Wilkes-Barre/Scranton’s All-Star defenseman three primary assists on the night.

Wilkes-Barre/Scranton will face Charlotte again tomorrow, Saturday, Jan. 12, in the second contest of their two-game set in the Queen City. The Penguins’ next home game is on Friday, Jan. 18 against the Rochester Americans. The Amerks’ lone visit to Mohegan Sun Arena at Casey Plaza this season also serves as an Eyewitness News Fan Friday with lower bowl tickets available for just $14 and select draught beers on sale for $2 from 6:00 – 7:30 p.m. Puck drop between the Penguins and Amerks is scheduled for 7:05 p.m.