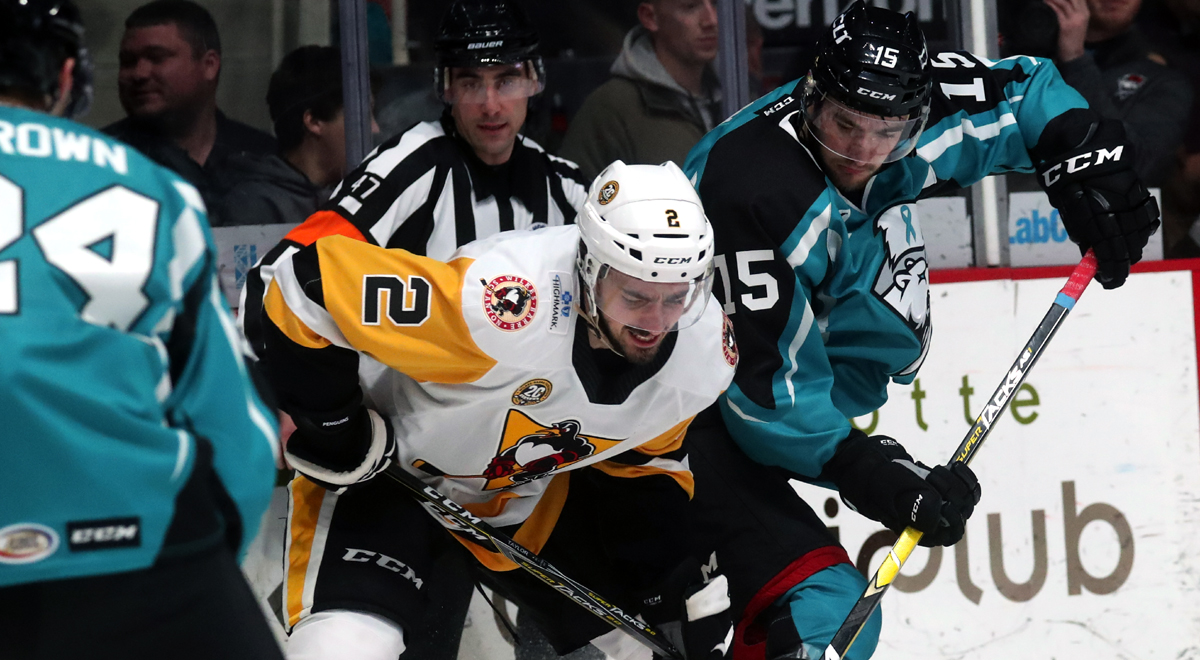 CHARLOTTE, N.C. – The Wilkes-Barre/Scranton Penguins fell to the Charlotte Checkers, 5-3, at Bojangles’ Coliseum in Charlotte on Saturday night.

Wilkes-Barre/Scranton (19-16-4-1) saw Cam Brown score his first goal as a Penguin and All-Star Ethan Prow notch a power play goal as the Penguins valiantly attempted to dig out of a 3-0 hole, but Charlotte kept its distance and avenged its loss to the Penguins from the night before.

The Checkers established an early lead, scoring three goals in the first 8:18 of the contest. Julien Gauthier opened things up 74 seconds into the game, and Morgan Geekie made it 2-0 three and a half minutes later. The third goal of the frame was scored by Zach Nastasiuk on Charlotte’s second power play opportunity of the night.

The Penguins put one on the scoreboard at 12:40 of the second period, with Brown sending the puck to the back of the net. Wilkes-Barre/Scranton continued its comeback bid when Prow potted a man advantage marker at 15:52 of the second stanza, bringing the Penguins within one.

Charlotte responded with less than two minutes before the second intermission on a goal by Nicholas Roy, allowing the Checkers to seize a 4-2 lead.

Wilkes-Barre/Scranton gained momentum and sliced its deficit down to one goal yet again, this time with Jeff Taylor registering his second goal of the season at 12:40 of the final frame.

Desperate for the equalizer, the Penguins continued to press and threw 17 shots on goal over the course of the third period. However, the tying goal never materialized, and Roy sealed the win for the Checkers with an empty netter.

Tristan Jarry posted 22 saves in net for the Penguins, while Alex Nedeljkovic recorded 26 saves for the Checkers.

Wilkes-Barre/Scranton’s next game is on Friday, Jan. 18 against the Rochester Americans. The Amerks’ lone visit to Mohegan Sun Arena at Casey Plaza this season also serves as an Eyewitness News Fan Friday with lower bowl tickets available for just $14 and select draught beers on sale for $2 from 6:00 – 7:30 p.m. Puck drop between the Penguins and Amerks is scheduled for 7:05 p.m.