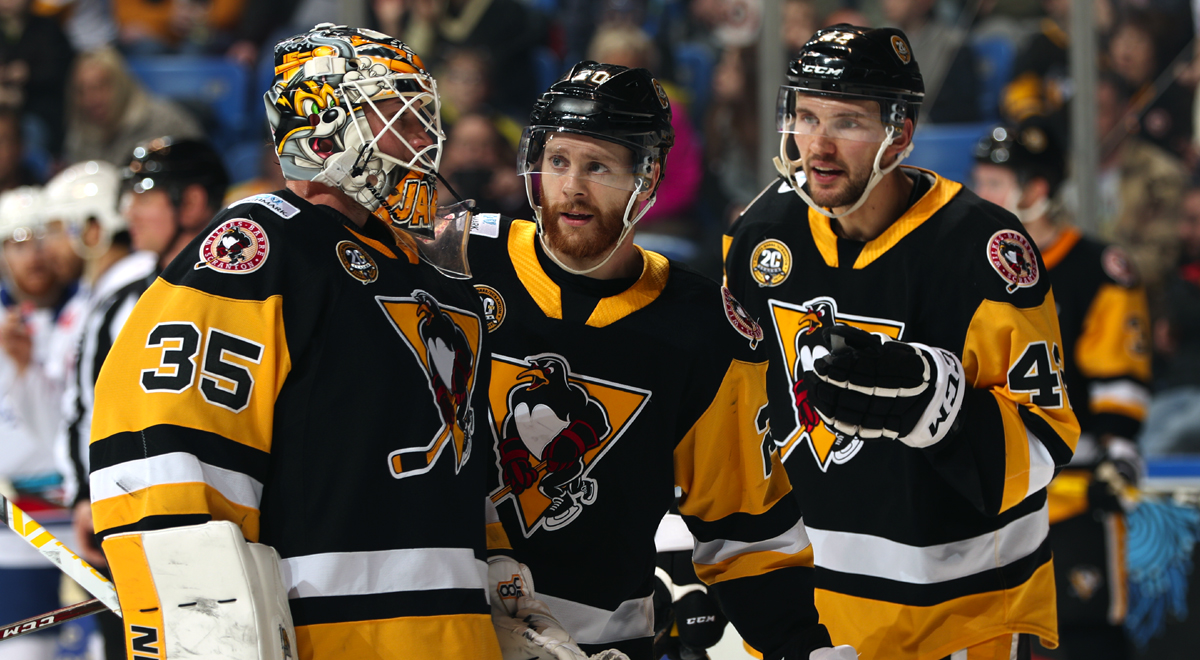 WILKES-BARRE, Pa. – The Wilkes-Barre/Scranton Penguins pulled within one goal late in the contest, but lost to the Rochester Americans, 5-4, on Friday night at Mohegan Sun Arena at Casey Plaza.

Wilkes-Barre/Scranton (19-17-4-1) rallied back and forth throughout the matchup, but ultimately was unable to overtake the Americans in the third period.

The first goal of the night was secured by Penguins rookie Anthony Angello at 3:29 of the opening frame. Angello settled a shot from the point atop the crease and tucked it around Scott Wedgewood for the game’s opening goal. However, the Americans managed to get on the scoreboard a little more than one minute later with a snipe by Zach Redmond.

Joseph Cramarossa and Jimmy Hayes combined to reestablish Wilkes-Barre/Scranton’s lead at 9:46 of the first period with the former delivering a perfect saucer pass to Hayes for the finish on an odd-man rush.

Rochester evened the score again at 7:48 of the second stanza with a breakaway goal by Danny O’Regan. About five minutes later, Redmond notched his second of the night and gave the Amerks their first lead of the contest, 3-2.

Wilkes-Barre/Scranton fired back with a breakaway tally of its own, as Adam Johnson stripped a man of the puck in the defensive end and raced ahead for the 3-3 equalizer at 14:27 of the middle frame.

In the final frame, Victor Olofsson found the back of the net twice and extended the Amerks’ lead to 5-3 with six and a half minutes remaining in regulation. Despite another goal by Angello with the goalie pulled for an extra attacker, Wedgewood held strong in the final minute of regulation and prevented the Penguins from pulling even.

Wilkes-Barre/Scranton’s next game is tomorrow, Saturday, Jan. 19, against the Hershey Bears. Puck drop between the Penguins and Bears is scheduled for 3:05 p.m. at Mohegan Sun Arena at Casey Plaza.