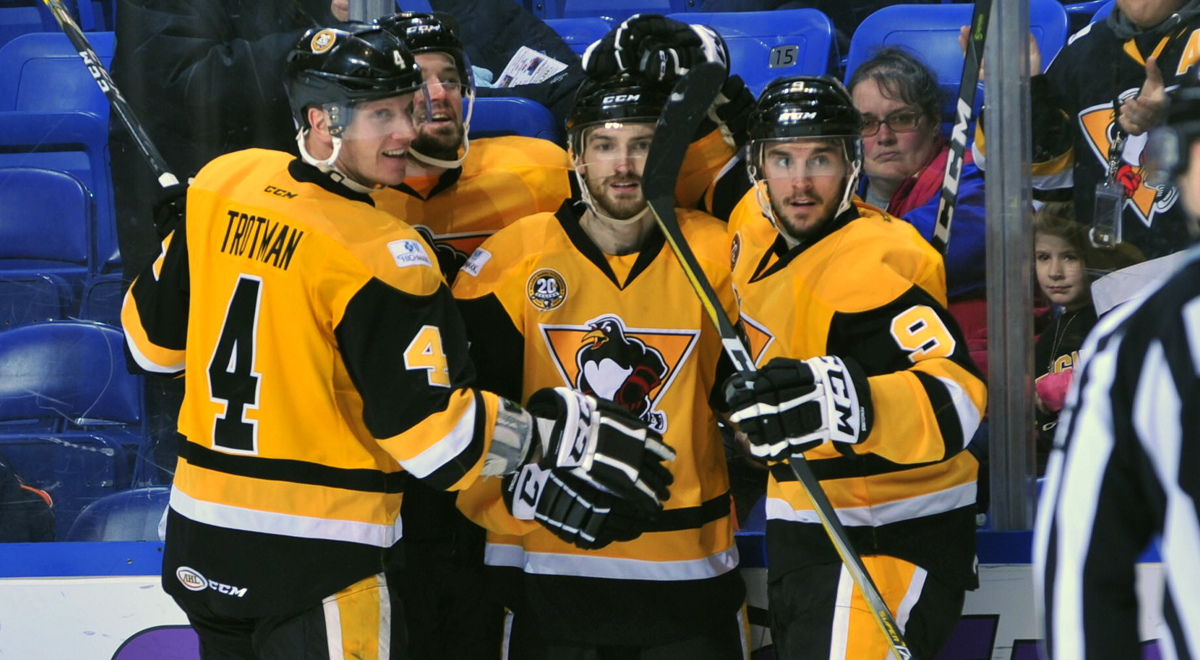 Wilkes-Barre/Scranton (20-18-5-1) threw 46 shots on Phantoms goalie Anthony Stolarz, but had to wait until midway through the third period to finally break through. Eventually, Penguins All-Star defenseman Ethan Prow buried the game-winner in overtime.

The first two periods ended in a 0-0 tie with both Stolarz and Wilkes-Barre/Scranton’s Tristan Jarry performing magnificently between the pipes. The Penguins out-shot the Phantoms, 15-9, in period one, and then followed that up by out-shooting their Keystone State rival, 17-8, in the middle frame. Jarry answered Stolarz’s stellar performance by helping Wilkes-Barre/Scranton kill off two Lehigh Valley power plays late in the first and early in the second.

Lehigh Valley’s Michael Huntebrinker scored the first goal of the game at 3:55 of the third period, sneaking a shot under Jarry, off the post and in.

The Penguins evened the score shortly after the expiration of a power play as Adam Johnson collected a shot off the back boards and ripped the puck past an unsuspecting Stolarz with nine minutes left to play in regulation.

Jarry and Stolarz both held firm throughout the remainder of the third period, and time ran out before either team could take another lead.

When overtime arrived, Prow secured the winning tally four minutes into the extra session, giving the Penguins the 2-1 victory. Teddy Blueger drove to the Phantoms’ net-front, only to be denied by Stolarz with a sprawling save. Prow followed up the play and on his second rebound attempt, found his 12th goal of the season and two points in the standings for Wilkes-Barre/Scranton.

Jarry stopped 27 shots faced, while Stolarz turned away 44 of 46 shots for the Phantoms.

Wilkes-Barre/Scranton’s next game is Wednesday, Jan. 23, when they travel to Webster Bank Arena to take on the Bridgeport Sound Tigers for a 10:30 a.m. school day game. The Penguins’ next home game is Friday, Feb. 1 against the Cleveland Monsters. Puck drop between the Penguins and Monsters is scheduled for 7:05 p.m. at Mohegan Sun Arena at Casey Plaza.

Fans can also keep up with the Penguins through the AHL’s brand new high definition streaming service, AHLTV. Subscriptions for AHLTV, which include live and archived games, begin at just $49.99 for the remainder of the 2018-19 regular season. Fans can visit theahl.com/AHLTV now to register for a free AHLTV account and purchase 2018-19 subscriptions.