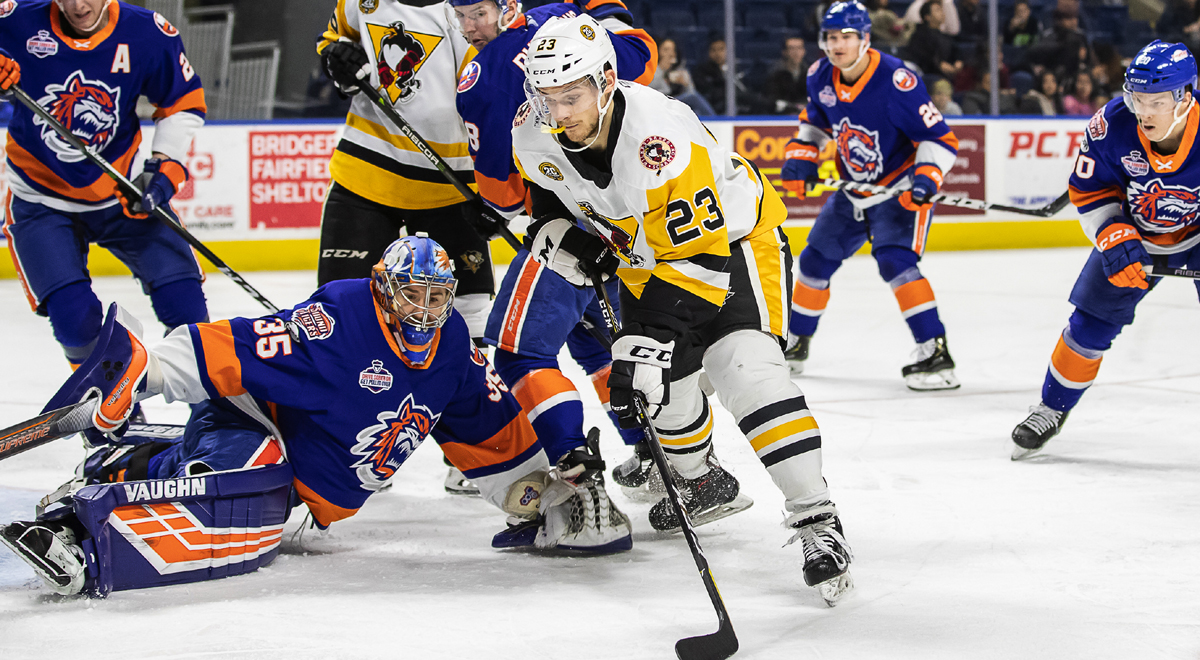 BRIDGEPORT, Conn. – The Wilkes-Barre/Scranton Penguins woke up early and raced to a convincing 5-2 over the Bridgeport Sound Tigers on Wednesday morning at Webster Bank Arena.

Wilkes-Barre/Scranton (21-18-4-1) was all over its opponent from the drop of the first puck at 10:30 a.m. and received two-goal outings from Teddy Blueger and Ryan Haggerty in the win.

The Penguins jumped out to a 1-0 lead at 3:55 of the first period when newcomer Joseph Blandisi scored on his second shift with the team. Blueger followed up Blandisi’s goal with a tally of his own at 12:52 of the opening frame. Blueger read the Sound Tigers’ breakout and intercepted a pass in the neutral zone before galloping into the offensive end and uncorking a lethal wrist shot into the Bridgeport net.

Haggerty notched his first goal of the day two minutes into the second stanza, ripping a wrister underneath Christopher Gibson’s pads and prompting Bridgeport coach Brent Thompson to replace his starter with back-up goalie Jeremy Smith.

The two clubs combined for a frenzy of scoring during a three-minute stretch in the second period, including a pair of goals by Blueger and Haggerty to put the Penguins ahead, 5-0. Bridgeport then called its timeout and responded with two quick strikes from Chris Casto and Tanner Fritz, reducing the deficit to three goals.

Wilkes-Barre/Scranton shut things down in the third period and disallowed Bridgeport from creeping any closer to infringing upon its 5-2 lead.

Tristan Jarry recorded 25 saves in the win for the Penguins. Gibson posted six saves on nine shots faced before being replaced by Smith, who turned aside 16 of the 18 bids thrown his way.

Wilkes-Barre/Scranton’s next game is Wednesday, Jan. 23, when they travel to Webster Bank Arena to take on the Bridgeport Sound Tigers for a 10:30 a.m. school day game. The Penguins’ next home game is Friday, Feb. 1 against the Cleveland Monsters. Puck drop between the Penguins and Monsters is scheduled for 7:05 p.m. at Mohegan Sun Arena at Casey Plaza.

A LATE CHRISTMAS PRESENT FOR DEA