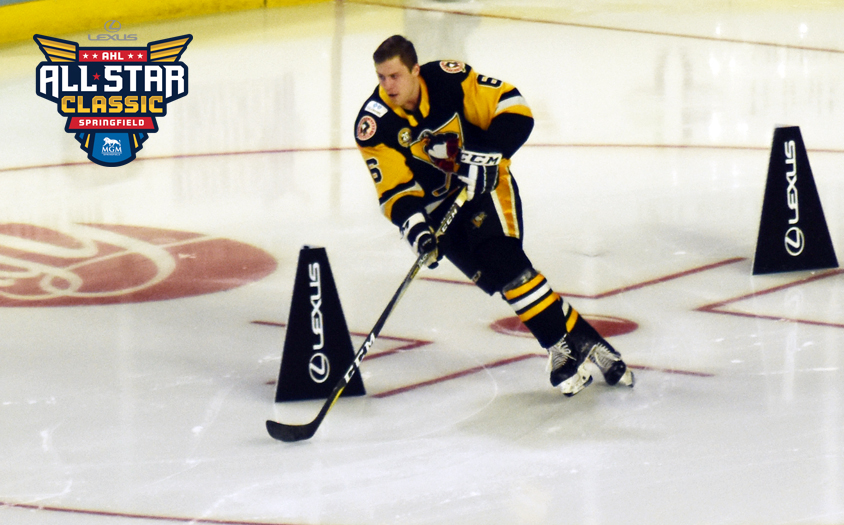 The Western Conference team pulled out a surprise come-from-behind victory to take a 17-14 win in the 2019 AHL All-Star Skills Competition on Sunday night at the MassMutual Center in Springfield, Massachusetts.

The Eastern Conference carried a 10-7 lead into the Breakaway Relay, the seventh and final competition of the evening.  The Western Conference shooters bettered their opposite numbers by a 10-4 mark to grab the win away from the host side.

Wilkes-Barre/Scranton Penguins defenseman Ethan Prow participated in three events – the Puck Control Relay, Accuracy Shooting and Breakaway Relay – for the Eastern Conference.  And although his team didn’t pull out the victory, the first-time All-Star enjoyed the experience.

“I think I hit the cross bar three or four times (in Accuracy Shooting),” said Prow, who hit two targets on eight shots in the competition.  “It just wasn’t my night there.  But you just got to roll with it.  It was still fun, and you’ve just got to laugh about it and enjoy it.”

The highlight of the evening was Anthony Greco of the hometown Springfield Thunderbirds setting a new record in the Fastest Skater contest, with a mark of 13.251 seconds.  That speed bettered the previous best of 13.324, set by current Penguins defenseman Chris Summers when he suited up in the 2013 competition as a member of the Portland Pirates.

Lehigh Valley’s Greg Carey was the lone skater to top the 100 mile per hour mark in the Hardest Shot contest, with a shot of 100.4 mph.

The 2019 AHL All-Star Classic continues on Monday night with the All-Star Challenge, pitting four divisional teams against one another in three-on-three mini games.  The action starts at 7:00pm, and can be seen on the NHL Network in the United States, Sportsnet One/Sportsnet Now in Canada, and online via AHLTV for free.

In operation since 1936, the American Hockey League serves as the top development league for the players, coaches, managers, executives, broadcasters and staff of all 31 National Hockey League teams. More than 87 percent of today’s NHL players are American Hockey League graduates, and more than 100 honored members of the Hockey Hall of Fame spent time in the AHL in their careers. In 2017-18, over 6 million fans attended AHL regular-season and playoff games across North America for the 17th year in a row.