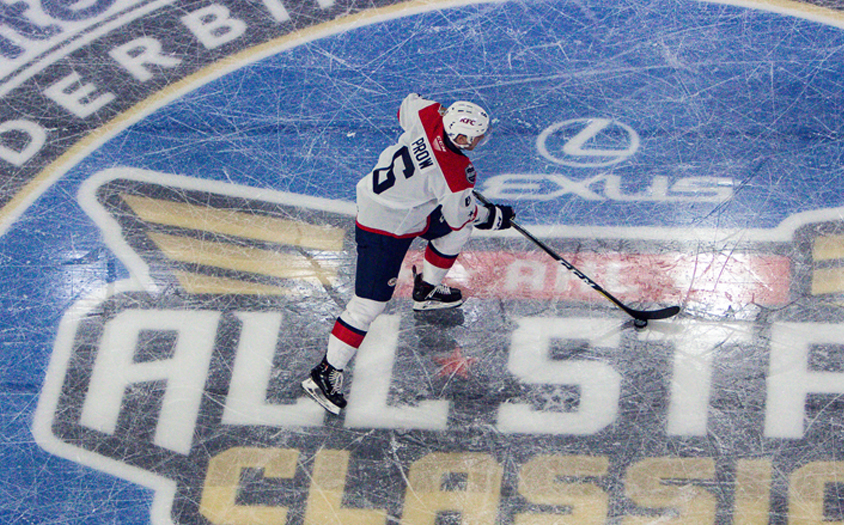 Trevor Moore’s goal in the fourth round of the shootout was the deciding tally, as the North Division posted a 1-0 victory in over the Atlantic Division in the finale of the AHL All-Star Challenge on Monday night in Springfield.

That tally came after a scoreless six minute regulation between the teams, who both finished the round robin portion of the night with 2-1 records.

Drake Batherson of the Belleville Senators took home MVP honors after posting five goals on the night, plus another tally in the shootout for the North.

Wilkes-Barre/Scranton Penguins defenseman Ethan Prow posted one goal for the second place Atlantic squad, that coming in a 5-2 victory over the Pacific Division in the fourth game of the evening.

Prow and the Penguins return to regular action with a pair of home games this Friday against the Cleveland Monsters and Saturday against the Bridgeport Sound Tigers.

Friday night’s game is another Eyewitness News FAN FRIDAY, with lower bowl tickets available for just $14, $2 draft beers from 6-7:30, and postgame autographs.  Purchase tickets for FAN FRIDAY by calling 570-208-7367, or by visiting this link:  ticket specials

Saturday night is the Penguins’ Pink in the Rink game, to help in the fight against cancer.  Fans can purchase tickets to the game and make a donation to the American Cancer Society by visiting this link:  WilkesBarreScranton Penguins Annual Pink in the Rink

Season ticket packages for the 20th season of Wilkes-Barre/Scranton Penguins hockey, including 12-game and Flexbook plans, are available by reaching out to the Penguins directly at (570) 208-7367.

Fans can also keep up with the Penguins through the AHL’s brand new high definition streaming service, AHLTV. Subscriptions for AHLTV, which include live and archived games, begin at just $49.99 for the remainder 2018-19 regular season. Fans can visit theahl.com/AHLTV now to register for a free AHLTV account and purchase 2018-19 subscriptions.