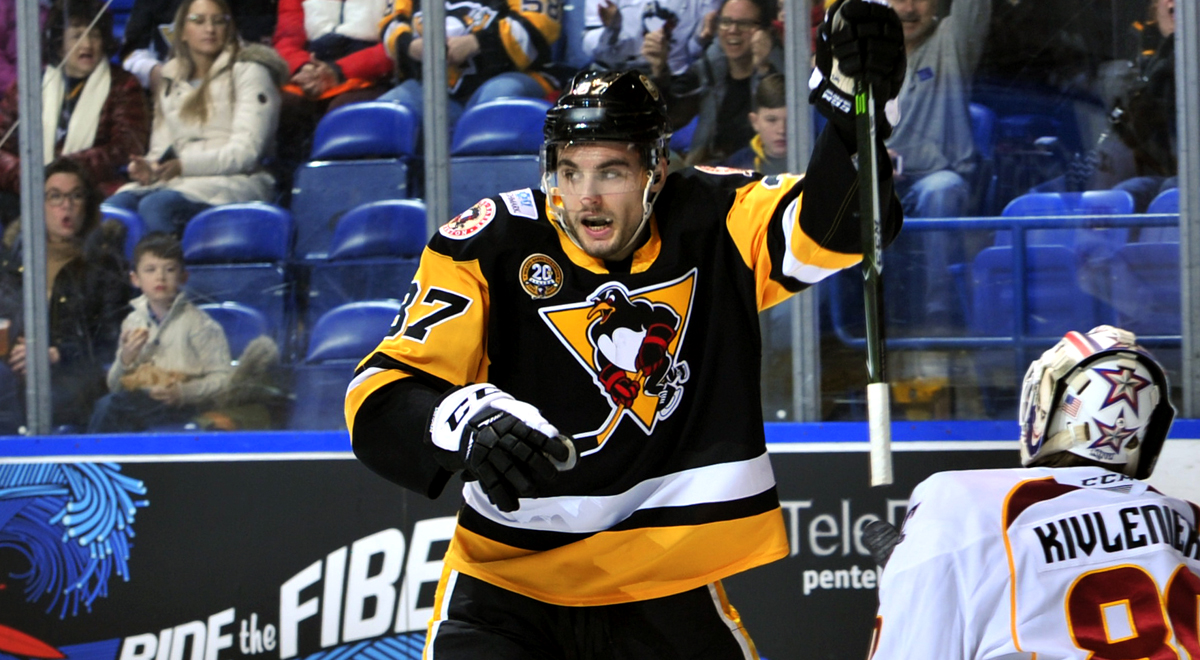 WILKES-BARRE, Pa. – Sam Miletic’s four-point game led the Wilkes-Barre/Scranton Penguins to a 7-2 triumph over the Cleveland Monsters on Friday at Mohegan Sun Arena at Casey Plaza.

The Penguins (23-18-4-1) came out of the All-Star break on fire by racing out to a commanding lead in the first period that they never relinquished. Miletic’s four points (1G-3A) were the most impressive by the of the evening, but Joseph Blandisi and Jean-Sébastien Dea both recorded three-point efforts while Tristan Jarry denied 35 shots to seal the team’s fourth win in a row.

Blandisi scored first for the Penguins seven minutes into the contest, continuing his personal streak of opening the scoring in all three games he’s played with Wilkes-Barre/Scranton this season. A little more than two minutes later, Ethan Prow launched a slapshot from the point to the back of the net on the power play to take a 2-0 lead.

Dea had one goal called back due to a quick whistle, but made his second scoring chance count at 16:30 of the opening frame with a tap-in on the backdoor following an acrobatic, spinning pass out of the corner from Adam Johnson.

Cleveland did not go silently, adding a man-advantage marker at 12:16 of the second period. However, the Penguins reestablished their three-goal advantage when Chris Summers’ shot from the left circle was tipped in by Ryan Haggerty for his 10th tally of the season.

Blandisi added his third point (1G-2A) of the night by feeding Dea for another power-play strike 76 seconds into the final frame. Cleveland responded 30 seconds later, briefly making it a 5-2 contest before Anthony Angello later beat Matīss Kivlenieks on a two-on-one rush. Dea got the lone assist on Angello’s goal, giving him his third point (2G-1A) of the contest and his sixth multi-point game of the season.

Miletic capped off his four-point evening and Wilkes-Barre/Scranton’s 7-2 win when he deposited a rebound behind Kivlenieks at 13:15 of the third period.

Kivlenieks faced 42 shots throughout the contest and recorded 35 saves.

Wilkes-Barre/Scranton’s next game is tomorrow, Saturday, Feb. 2, against the Bridgeport Sound Tigers at Mohegan Sun Arena at Casey Plaza. Puck drop between the Penguins and Sound Tigers is scheduled for 7:05 p.m.