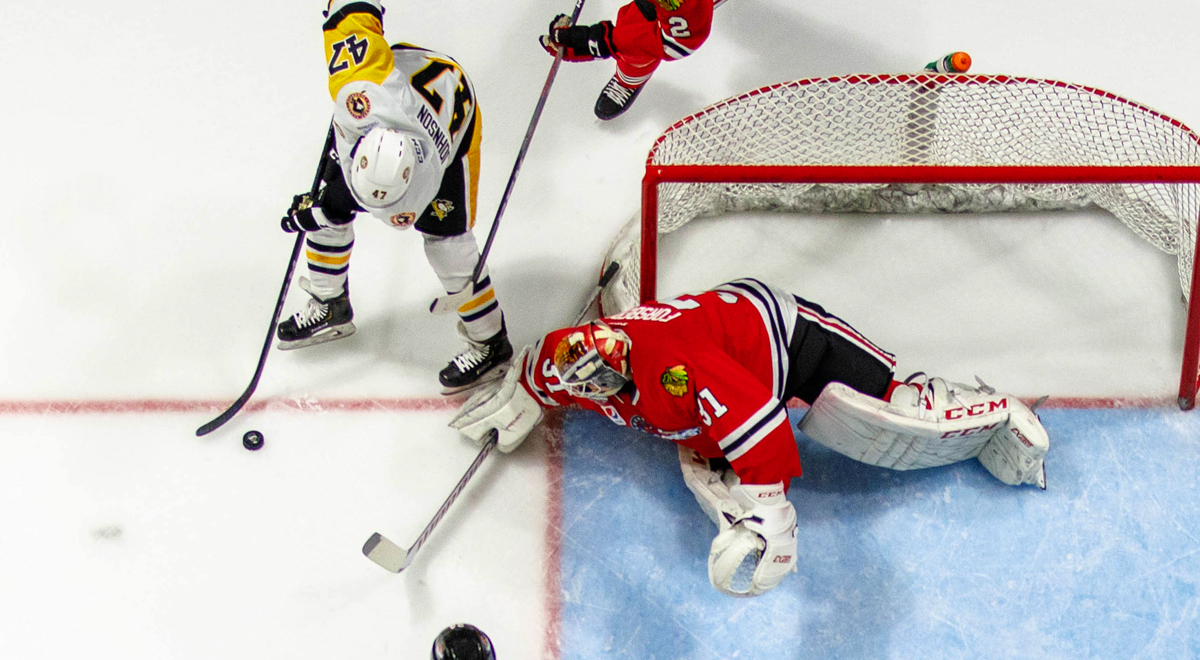 ROCKFORD, Ill. – The Wilkes-Barre/Scranton Penguins were stonewalled by an unbelievable goaltending performance in a 2-1 loss to the Rockford IceHogs on Wednesday at BMO Harris Bank Center.

Anton Forsberg recorded 45 saves, including going 19-for-19 in the second period and 20-for-20 in the final frame, to deny Wilkes-Barre/Scranton (23-20-4-1) a chance to start its Midwest road trip on the right foot.

Rockford struck early with Josh McArdle collecting a rebound in the high slot and beating Anthony Peters glove-side at 1:42 of the first period. Jarrett Burton responded in swift fashion, creating a breakaway for himself and sniping the shot past Forsberg 63 seconds after the IceHogs took the lead.

That was the Penguins’ second shot of the game, and it was the last time Forsberg was fooled.

A mid-first period five-on-three power play gave way to the IceHogs’ popping back on top, 2-1. Luke Johnson posted up down low at the left circle and blasted a one-timer to the back of the Penguins’ net at 12:49 of the opening frame.

Wilkes-Barre/Scranton took it to Rockford throughout the rest of regulation, but never managed to even the scales. The Penguins led in shots, 19-6, at the end of a scoreless middle frame, and then bested the IceHogs in shots again in the third period, 20-7. Forsberg would not yield, leaving Wilkes-Barre/Scranton in disbelief that its 46-shot showing wasn’t enough to get the win.

Peters denied 25 shots while manning the pipes for the Penguins.

Wilkes-Barre/Scranton’s next game is Friday, Feb. 8, as it continues its Midwest road trip against the Milwaukee Admirals. The Penguins’ next home game is Saturday, Feb. 16, against the Utica Comets. Puck drop on Military Appreciation Night presented by MetLife between the Penguins and Comets is scheduled for 7:05 p.m. at Mohegan Sun Arena at Casey Plaza.