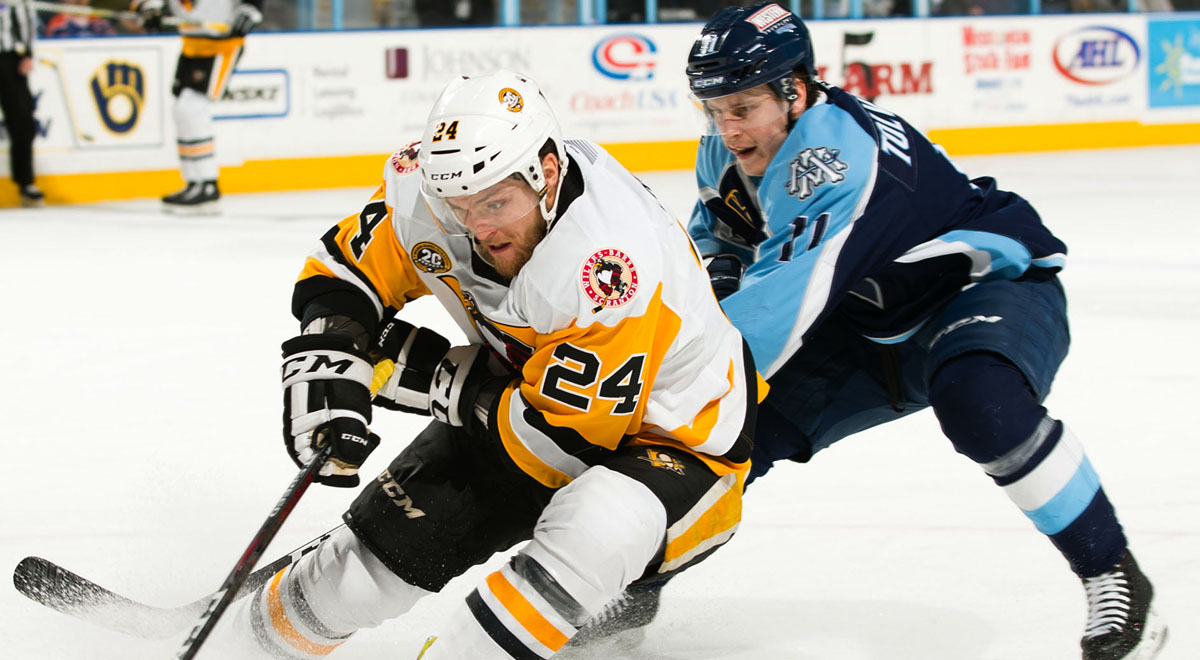 MILWAUKEE, Wisc. – The Wilkes-Barre/Scranton Penguins came out of the gate fast and took down the Milwaukee Admirals, 5-2, on Friday night at UW-Milwaukee Panther Arena.

The Penguins got off to their strong start by taking advantage of their first power play of the contest. Kevin Czuczman set up Lafferty at the right-side circle to launch a wrister off the pipe and to the back of the net at 5:22.

Five minutes later, Wilkes-Barre/Scranton struck at even strength. Ethan Prow flipped a pass high into the air from the Penguins’ defensive zone, and it landed right at the feet of Joseph Cramarossa at the Admirals’ blue line. Cramarossa’s first bid was initially denied, but Jimmy Hayes punched in the rebound.

Lafferty collected his second power-play tally of the night at 16:41 of the first period, this time using his speed to split the Milwaukee defense for a backhanded finish and a 3-0 Wilkes-Barre/Scranton lead.

A second-period two-on-one led to Blandisi setting up Miletic’s first career shorthanded goal midway through the middle frame. However, the Admirals responded with a shorthanded strike of their own roughly four minutes later.

Blandisi found a loose puck behind the Admirals net and managed to stuff it past Troy Grosenick for a 5-1 lead at 13:29 of the third. Once again, the Admirals responded 44 seconds later, but they came no closer to infringing upon the Penguins’ commanding lead.

John Muse stopped 33 shots on the way to victory, while Grosenick made 23 saves in defeat.

Wilkes-Barre/Scranton closes out its Midwest road trip tomorrow, Saturday, Feb. 9, against the Grand Rapids Griffins. The Penguins’ next home game is Saturday, Feb. 16, against the Utica Comets. Puck drop on Military Appreciation Night presented by MetLife between the Penguins and Comets is scheduled for 7:05 p.m. at Mohegan Sun Arena at Casey Plaza.