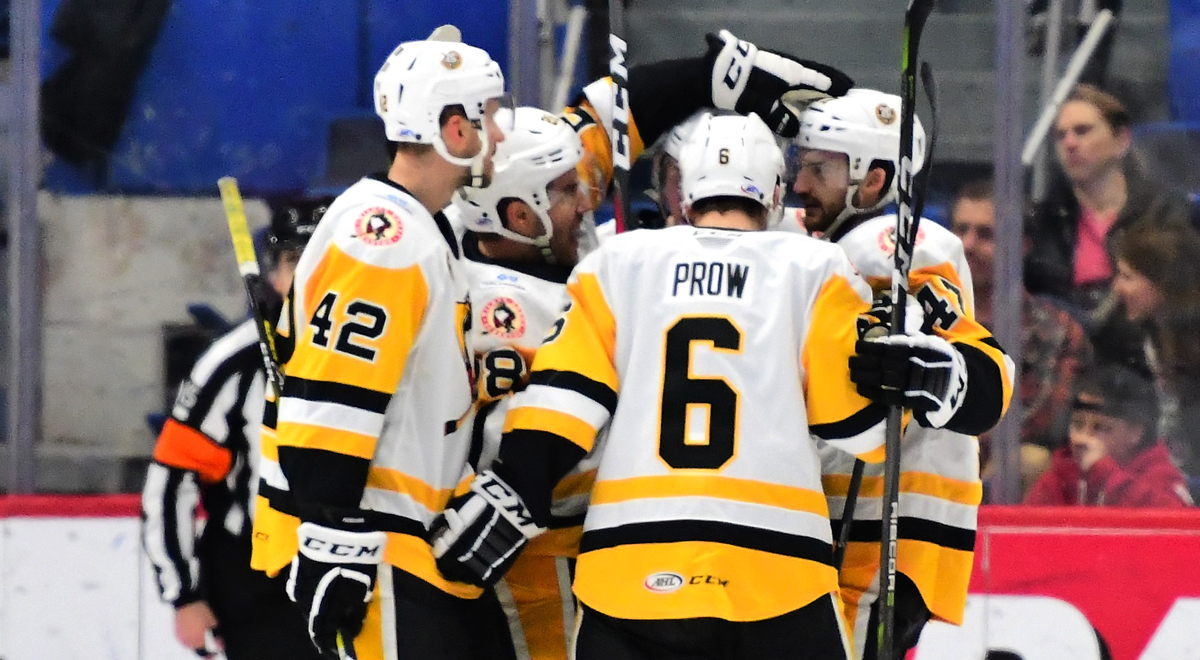 HARTFORD, Conn. – The Wilkes-Barre/Scranton Penguins emerged victorious at the end of a 5-4 overtime thriller over the Hartford Wolf Pack on Sunday afternoon at XL Center.

Wilkes-Barre/Scranton (25-21-5-2) had a three-goal explosion in the middle frame only to see its opponent respond with three goals of its own in the third period to force extra minutes for the third straight game. The see-saw contest came to an end when Adam Johnson poked in the game-winning goal at 1:40 of OT.

Hartford struck first when Vinni Lettieri took a hard-angle shot that squeaked between John Muse’s equipment and the pipe for a 1-0 lead 4:41 into the contest. However, the Penguins answered 1:20 later with a rebound conversion by Ryan Haggerty. Haggerty’s goal gives him tallies in three-straight contests and 10 points (7G-3A) in his last 10 games.

Wilkes-Barre/Scranton took its first lead of the game at 5:35 of the second period. Johnson raced across the blue line down the left-hand side of the Hartford zone, ripped a shot off the pads of Tokarski that was gathered by Sam Lafferty and put to the back of the net. Lafferty added an assist on the Penguins’ goal that made it 3-1, a face-off win that set-up Chris Summers for his first goal of the season.

The Penguins’ lead ballooned to 4-1 on a quick shot by Zach Trotman that was tipped in by Joseph Blandisi at 16:15 of the middle frame. After the Blandisi goal, Tokarski took a seat, and Brandon Halverson took his place between the pipes for Hartford.

Hartford’s third period outburst began with a Steven Fogarty goal 29 seconds into the third period. Peter Holland pulled the Wolf Pack within one at the five-minute mark of the third, and then a power-play goal by Sean Day evened the score midway through the final frame.

The score remained even at 4-4 as the two clubs entered overtime, where Johnson delivered the winner for the Penguins. Halverson denied Johnson’s initial shot by Johnson, the Penguins’ forward stayed in the action and poked the rebound underneath Hartford’s netminder.

Halverson made 10 saves on 11 shots faced in relief of Tokarski, who stopped 22 of the 26 bids steered his way. Muse recorded 21 saves in the victory for the Penguins.

Wilkes-Barre/Scranton’s next game Friday, Feb. 22 against the Hershey Bears. Hershey’s final trip to Mohegan Sun Arena at Casey Plaza this season also serves as an Eyewitness News Fan Friday, with lower-bowl seating available for $14 and select draught beers on sale for $2 from 6:00–7:30 p.m. Puck drop on between the Penguins and Bears is scheduled for 7:05 p.m.