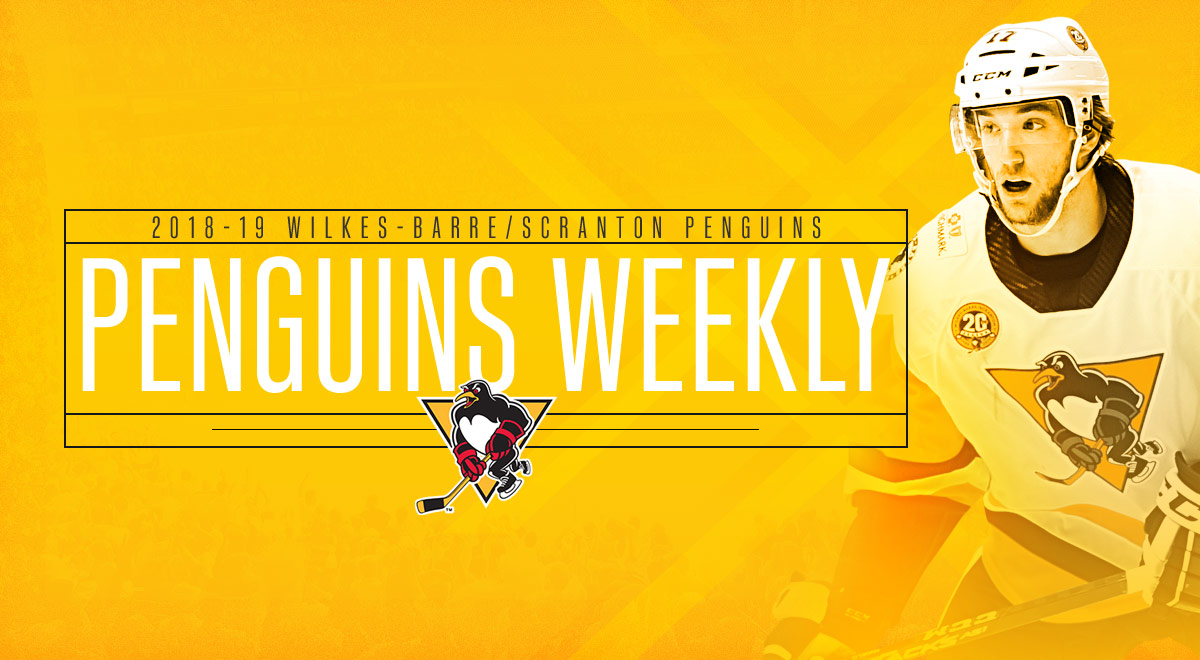 Back-and-forth scoring between Wilkes-Barre/Scranton and Hershey required a shootout to decide the victor. The Bears went two-for-two and denied attempts by Sam Miletic and Jimmy Hayes to earn the extra point.

Down by two goals in the third period, the Penguins tallied twice to force OT, including Ryan Haggerty’s equalizer in the final minute of regulation. End-to-end action in the extra frame concluded in favor of the Comets.

The Penguins’ third overtime game of the week finally saw them come out on top after 60 minutes of wild momentum swings. Wilkes-Barre/Scranton scored three goals in the second period and carried a three-goal edge into the final frame. Hartford answered with three goals of their own in the third period. Adam Johnson sealed the victory for the Pens, knifing in his first career overtime goal.

Friday, Feb. 22 – PENGUINS vs. Hershey Wilkes-Barre/Scranton looks to extinguish the hot Hershey Bears who are on a 15-game point streak (14-0-0-1). Adam Johnson has eight points (5G-3A) in the season series against Hershey, the most on Wilkes-Barre/Scranton’s active roster.

The Penguins host the IceHogs for the first and only time this season on a Kids Free Sunday. Kids ages 14 and under enter the arena free of change with the paid purchase of an adult ticket. The IceHogs got the better of the Pens in their only game earlier this month, largely thanks to Anton Forsberg’s 45 saves.  Rockford has the best team save percentage in the AHL (.917).

– Ryan Haggerty has found the back of the net in three consecutive games, and he has earned 10 points (7G-3A) in his last 10 games.

– Chris Summers notched his first goal of the season on Sunday and established a new career-high 13 points.

– Ethan Prow ranks third among all AHL defensemen in goals (16) and is tied for third among league D in points (38).

– Zach Trotman played in his 300th professional game on Saturday.

– Wilkes-Barre/Scranton has posted points in three-straight games with all three contests going beyond regulation.