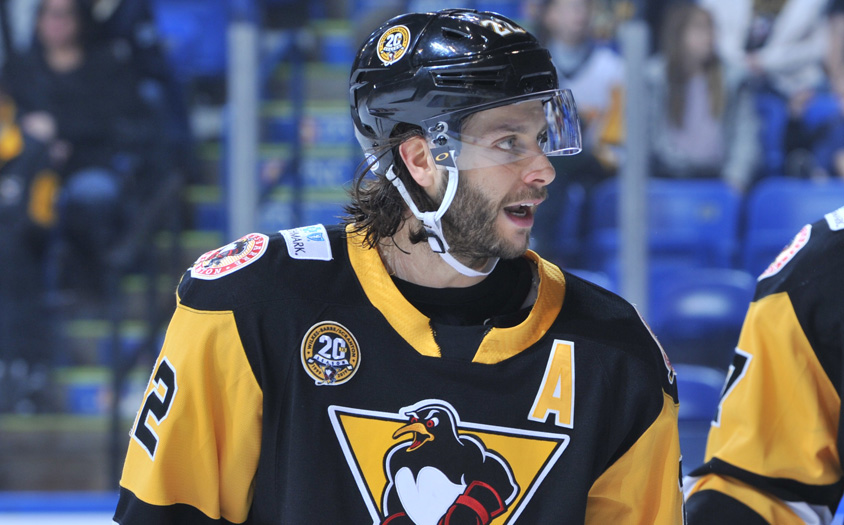 The Pittsburgh Penguins have signed forward Joseph Cramarossa to a two-way NHL contract for the remainder of the 2018-19 season, it was announced today by executive vice president and general manager Jim Rutherford.

The two-way deal contains an average annual value of $650,000 at the NHL level. Cramarossa must clear waivers at 12:00 PM on Thursday to remain with the organization. He would continue to play for the Wilkes-Barre/Scranton Penguins of the American Hockey League.

Cramarossa, 26, had been playing for WBS on an AHL-only contract since midway through last season. He was originally acquired by the organization in a minor-league trade from the Stockton Heat on February 14, 2018 in exchange for Colin Smith.

The 6-foot, 192-pound Cramarossa has spent the entire season thus far with WBS, contributing nine points (2G-7A) and a team-high 85 penalty minutes in 35 games. He has served as an alternate captain for WBS. Cramarossa attended Pittsburgh’s training camp this year, appearing in one NHL exhibition contest.

A Toronto, Ontario native, Cramarossa has previous NHL experience, splitting 59 games between the Anaheim Ducks and Vancouver Canucks in 2016-17. He scored four goals and 10 points with 60 penalty minutes in those appearances.

Before turning pro, Cramarossa skated four seasons of junior hockey in the Ontario Hockey League with the Mississauga St. Michael’s Majors and the Belleville Bulls. He played in the 2011 Memorial Cup with Mississauga.

Cramarossa was originally chosen by the Anaheim Ducks in the third round (65thoverall) in the 2011 NHL Draft.

Wilkes-Barre/Scranton returns to action this Friday night against the Hershey Bears at the Mohegan Sun Arena.  Hershey’s final trip to Mohegan Sun Arena at Casey Plaza this season also serves as an Eyewitness News Fan Friday, with lower-bowl seating available for $14 and select draught beers on sale for $2 from 6:00–7:30 p.m. Puck drop on between the Penguins and Bears is scheduled for 7:05 p.m.

Fans can also keep up with the Penguins through the AHL’s brand new high definition streaming service, AHLTV. Subscriptions for AHLTV, which include live and archived games, begin at just $44.99 for the remainder of the 2018-19 regular season. Fans can visit theahl.com/AHLTV to sign up.