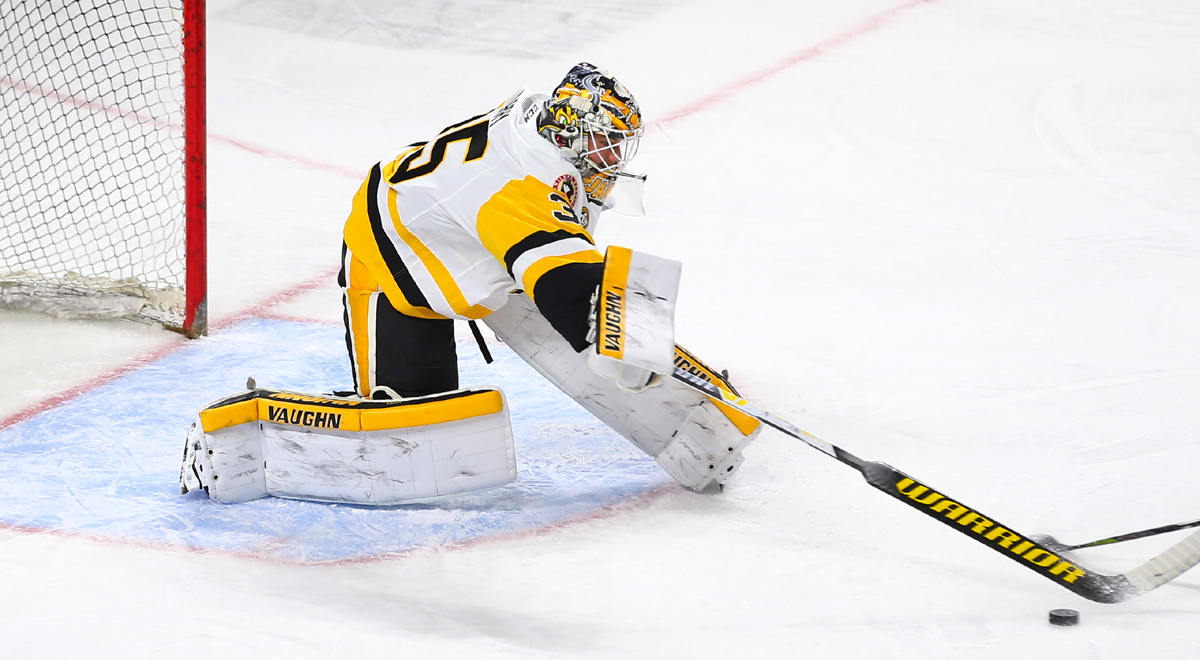 PROVIDENCE, R.I. – The Wilkes-Barre/Scranton Penguins prevailed in a shootout over the Providence Bruins, 2-1, Friday at Dunkin’ Donuts Center.

Wilkes-Barre/Scranton Penguins (27-22-5-2) scored in the opening minute of the third period to break the seal, but Providence answered five minutes later to force extra time. The Penguins ultimately tallied twice in the shootout, thanks to more shootout magic from Joseph Cramarossa.

Talented saves by both netminders, Tristan Jarry and Zane McIntyre, led to an even contest for the first 40 minutes of action. The first tally came in the opening 44 seconds of the third period, with Ethan Prow finally solving McIntyre. Chris Wideman took a chance from the point, but was denied by a kick-save. Prow collected the rebound at the top of the right circle and charged the net before taking a sharp-angle shot to the far post and lit the lamp for a 1-0 lead.

During the overtime, the Penguins were afforded a power play for the final 1:44 of game time, but couldn’t stuff anything past McIntyre. So on the two teams went to the shootout.

Ben Sexton and Joseph Cramarossa both beat McIntyre in the second and third rounds of the shootout and Jarry stonewalled the Bruins, stopping Providence’s two attempts. Cramarossa sealed the victory for the Penguins, improving to three-for-three in shootout attempts on the season.

Jarry turned aside 34 shots in regulation and overtime, while McIntyre denied 39 shots in defeat.

Wilkes-Barre/Scranton’s next game is tomorrow, Saturday, Mar. 2, against the Hartford Wolf Pack. The Penguins’ next home game is Wednesday, Mar. 6, when they take on a Keystone State rival, the Lehigh Valley Phantoms, in a game rife with postseason implications. Puck drop between the Penguins and Phantoms is scheduled for 7:05 p.m. at Mohegan Sun Arena at Casey Plaza.