PENGUINS COME BACK TO FORCE OT, BUT LOSE TO WOLF PACK 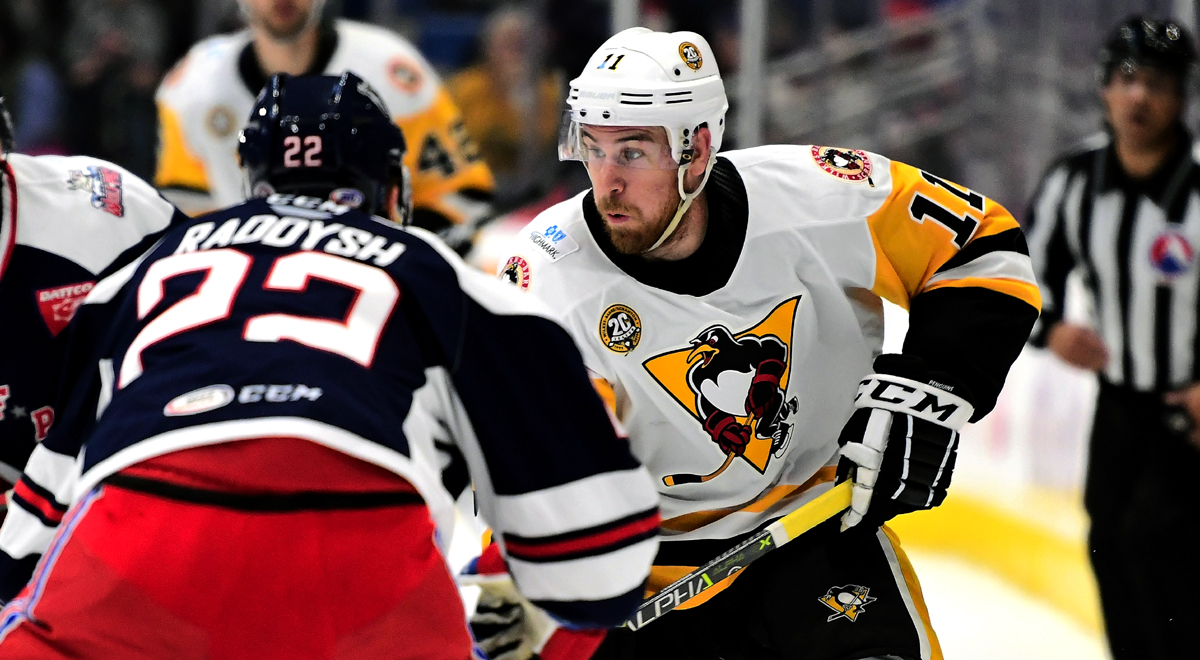 HARTFORD, Conn. – The Wilkes-Barre/Scranton Penguins earned a point but dropped a 4-3 overtime decision to the Hartford Wolf Pack on Saturday at XL Center.

Wilkes-Barre/Scranton (27-22-6-2) tallied twice in the third period in comeback fashion to force extra time, but its opponent scored early in OT to secure the victory.

The Penguins took an early lead, lighting the lamp 1:27 into the contest. Anthony Angello, from the right-wing corner, sent the puck to the slot for Joseph Blandisi who was waiting on the left-side hash marks. Blandisi launched a shot past Brandon Halverson and kissed the pipe on its way to the back of the net.

The Wolf Pack had a swift response with a similar set up for Ryan Gropp in the slot who knotted the game at 3:15 of the first period.

Hartford took the lead at 12:09 of the opening session when Ty Ronning redirected a point shot and then collected his own rebound off the pads of Tristan Jarry and punched the puck across the goal line. The Wolf Pack then went up 3-1 in the middle frame with a goal that arrived simultaneously to the expiration of a Penguins penalty kill. John Gilmour took a slapshot from the left point and beat Jarry to the far-side top corner.

The third period comeback began when Chris Wideman recorded his second assist in his second game in a Penguins sweater 39 seconds into the final period of regulation. Wideman’s sharp-angle shot was deflected in by Ben Sexton, slashing Wilkes-Barre/Scranton’s deficit in half.

The Penguins evened the scales, 3-3, on the power play with 2:37 left in regulation. Blandisi and Jarrett Burton quickly combined to dish the puck to Jimmy Hayes in the slot who whipped in his 100th professional goal.

Despite the comeback in the third period, the Penguins were downed by the Wolf Pack with a two-on-one attempt 22 seconds into the extra session. Gropp skated into the slot and sniped the top corner for his second strike of the game.

Jarry ultimately denied 28 of 32 shots faced in defeat, while Halverson turned aside 31 of the 34 attempts thrown his way.

Wilkes-Barre/Scranton’s next game is Wednesday, Mar. 6, when they take on the Lehigh Valley Phantoms at Mohegan Sun Arena at Casey Plaza in a game rife with postseason implications. Puck drop between the Penguins and Phantoms is scheduled for 7:05 p.m.