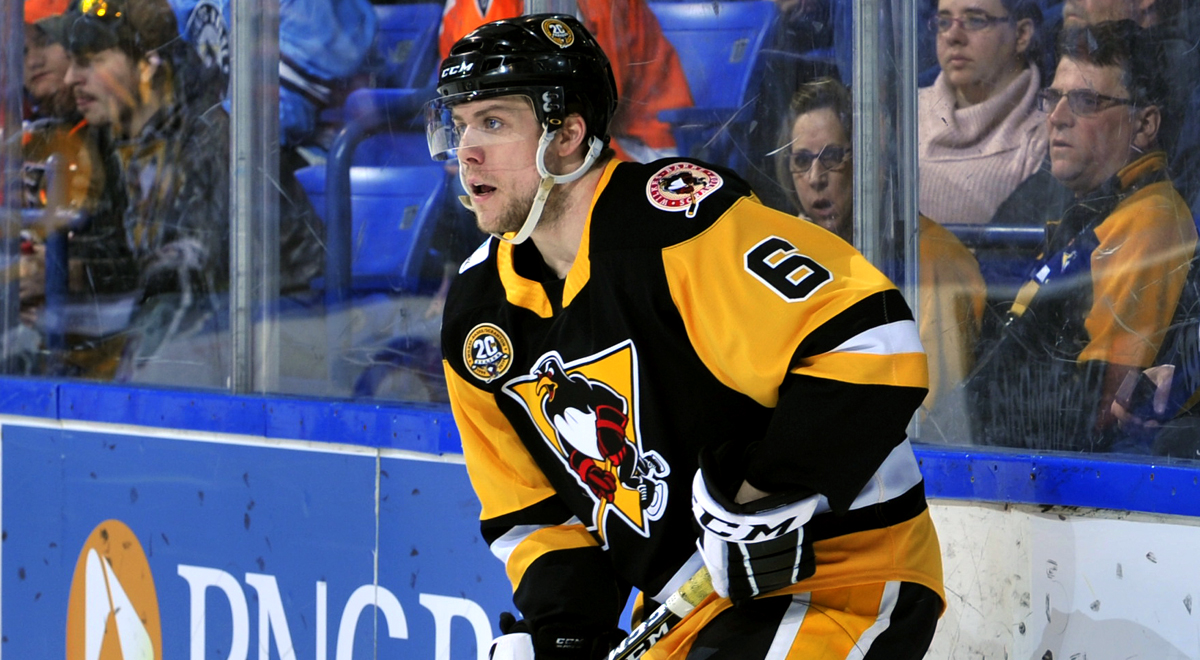 WILKES-BARRE, Pa. – The Wilkes-Barre/Scranton Penguins lost in a shootout, 3-2, to the Hartford Wolf Pack on Friday at Mohegan Sun Arena at Casey Plaza.

Defenseman Ethan Prow tallied on a five-on-three man advantage in the third period for Wilkes-Barre/Scranton (27-23-6-3) to even the contest and force overtime. The extra session was rife with fantastic scoring opportunities for both teams, but somehow, the amazing five-minute period yielded no goals, and Hartford managed to pull out the win in the shootout.

Joseph Cramarossa created the game’s first tally at 14:14 of the opening frame. He picked off a pass in the neutral zone, drove towards the Hartford net with speed and solved Brandon Halverson by slipping a backhand deke to the back of the net.

The Wolf Pack evened the scales 4:31 of the middle stanza. Sean Day ripped a shot from the point which was helped in by Drew Melanson. Day collected a second assist on a power-play goal at 8:47 of the second period. Ryan Gropp ripped a wrist shot from the right-side hash marks past Tristan Jarry for the man-advantage marker and a go-ahead goal for Hartford.

In the third period, the Penguins out-shot the Wolf Pack, 11-3, but didn’t muster an equalizer until Prow’s goal midway through the frame. Darren Raddysh took a high-sticking minor three seconds after Vinni Lettieri took a seat for slashing, giving the Penguins a two-man advantage for almost a full two minutes. Prow used that opportunity to smoke a slapshot past Halverson for his team-leading ninth power-play goal of the season and 17th goal overall.

In overtime, Wilkes-Barre/Scranton out-bid Hartford again, 6-2. However, both of the Wolf Pack’s shots in OT were point-blank breakaways that were turned aside in stellar fashion by Jarry. The Penguins’ six shots also required some difficult saves by Halverson, and by the goalies’ doing, the game required a shootout.

Bobby Butler scored the only goal of the shootout in the first round, earning Hartford the 3-2 win despite being out-shot 41-29 when the game was all said and done. Halverson denied all three Penguins attempts in the shootout in addition to 39 saves in regulation and overtime, while Jarry stopped 27 shots through 65 minutes and went one-for-two in the shootout.

Wilkes-Barre/Scranton’s next game is tomorrow, Saturday, Mar. 9, when it hosts the Syracuse Crunch on Marvel Super Hero™ Night. Puck drop between the Penguins and Crunch is scheduled for 7:05 p.m. at Mohegan Sun Arena at Casey Plaza.