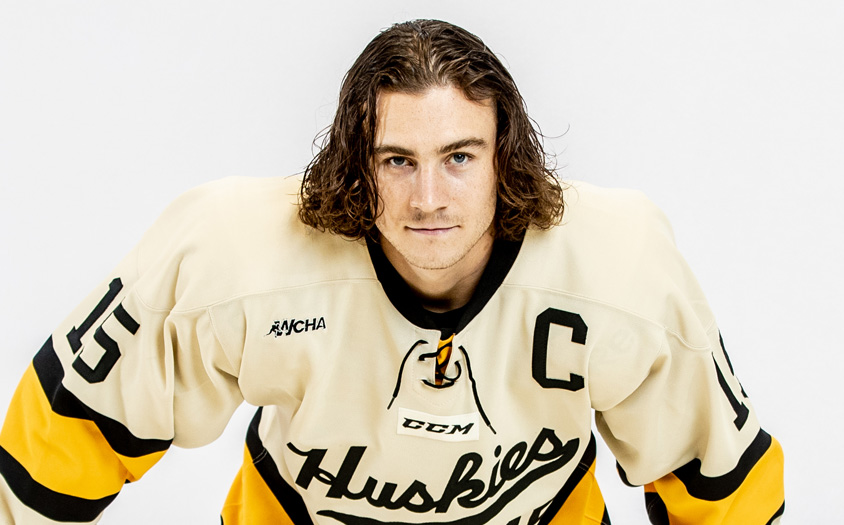 The contract will begin with the 2019-20 season. Lucchini will report to Wilkes/Barre-Scranton on Tuesday to play the rest of this season on an amateur tryout contract.

Lucchini, 23, played four years at Michigan Tech University, leading his team as captain this past season with 26 points (11G-15A) in 38 games.

The 5-foot-11, 183-pound native of Trail, British Columbia skated in 164 career games with Michigan Tech, compiling 45 goals, 59 assists and 104 points. Lucchini enjoyed a career year as an alternate captain in his junior season when he recorded career highs in goals (16), assists (23) and points (39) in 44 games.

Lucchini was named to the Western Collegiate Hockey Association’s All-Rookie Team in 2015-16 after tallying 17 points (7G-10A) in 37 games. His 11 conference points ranked fourth among freshmen in the WCHA, while his two power-play goals, one game-winning goal and 59 shots all ranked second. Lucchini received the Norbert Matovich Memorial Award as Michigan Tech’s top freshman.

Prior to Michigan Tech, Lucchini played three seasons with his hometown Trail Smoke Eaters of the British Columbia Hockey League from 2012-15. In 168 career games with the Smoke Eaters, the forward compiled 117 points (48G-69A). As team captain in 2015, Lucchini led the team in goals (35), assists (48) and points (83) in 56 games. His 83 points ranked fourth in the BCHL earning him BCHL Second Team All-Star honors.

Lucchini attended the Penguins Prospect Development Camp this past June.

Wilkes-Barre/Scranton’s next game is on Wednesday, Mar. 13, when it pays a visit to PPL Center to take on the Lehigh Valley Phantoms. The Penguins’ next home game is on Saturday, Mar. 16, and it will be the team’s annual St. Patrick’s Day celebration when the black and gold face-off against the Providence Bruins. Puck drop between the Penguins and P-Bruins is scheduled for 7:05 p.m.

Individual tickets for Wilkes-Barre/Scranton home games can be purchased at the Mohegan Sun Arena at Casey Plaza box office, through all Ticketmaster outlets, or by contacting the Penguins’ offices at (570) 208-7367.  Season ticket packages for the 20th season of Wilkes-Barre/Scranton Penguins hockey, including Flexbook plans, are available by reaching out to the Penguins directly at (570) 208-736