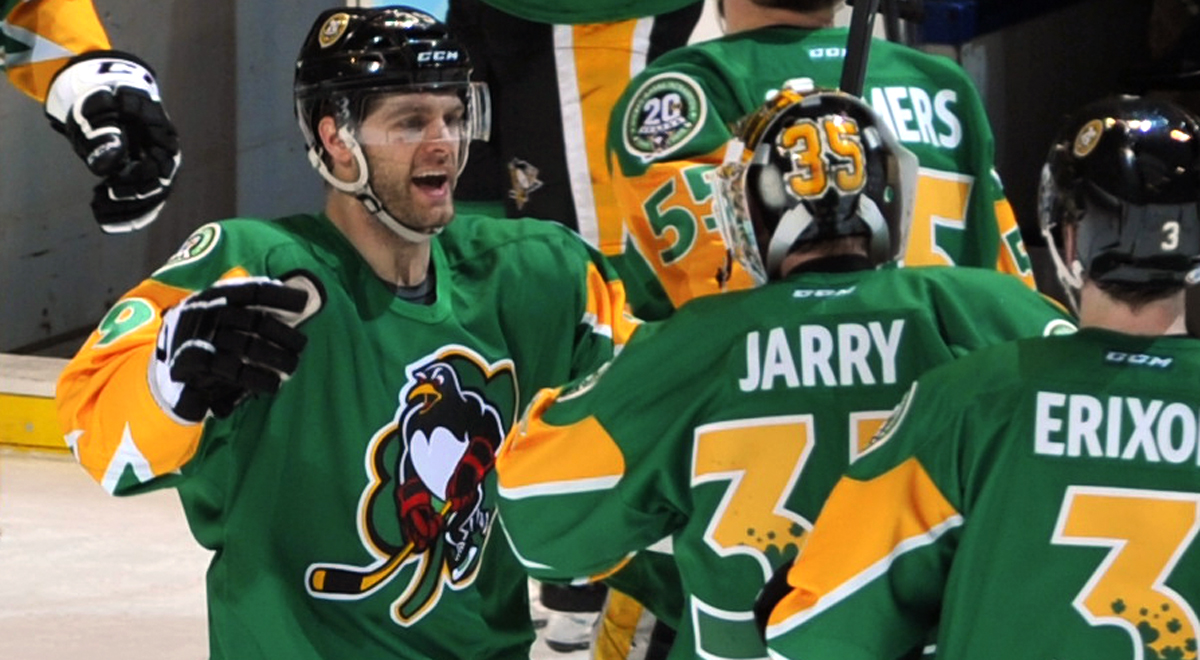 WILKES-BARRE, Pa. – The Wilkes-Barre/Scranton Penguins downed the Providence Bruins with a 2-1 overtime victory in an important game on Saturday night at Mohegan Sun Arena at Casey Plaza.

Adam Johnson scored the winning goal early in the extra session, granting Wilkes-Barre/Scranton (30-23-6-3) the win over the team directly ahead of them in the Atlantic Division’s hunt for the Calder Cup Playoffs. Tristan Jarry put together another magnificent showing between the pipes, stopping 36 shots on the way to victory.

Jake Lucchini’s first AHL goal snapped a longstanding scoreless tie at 16:25 of the second period. Jimmy Hayes picked the pocket of one of the Bruins in the neutral zone, leading to a two-on-one rush with Lucchini. Hayes’ initial shot was denied, but the rookie drove to the net and stuffed in the rebound, creating a 1-0 lead for Wilkes-Barre/Scranton.

Providence tied things up when Ryan Fitzgerald fished a loose puck from behind Jarry and pushed it across the goal line midway through the third period.

The Bruins nearly went ahead late in regulation with a flurry of A-1 scoring chances, but Jarry turned them all aside, including an acrobatic, pin-wheel denial of Jakub Zbořil with roughly two minutes left.

After Jarry stonewalled Providence’s second shot of overtime, Ethan Prow delivered a pin-point pass to Johnson, who was flying at full speed through the neutral zone. Johnson muscled his way past a Bruins defender before hoisting a perfectly placed backhand shot under the crossbar for the game-winner and his 18th tally of the season.

Zane McIntyre recorded 26 stops in the overtime loss for the Bruins.

Wilkes-Barre/Scranton’s next game is tomorrow, Sunday, Mar. 17, against the Toronto Marlies. Toronto’s first and only visit to Mohegan Sun Arena at Casey Plaza this season is also a Kids Free Sunday, with children aged 14 and under eligible to attend the game free of charge with the paid purchase of an adult ticket. Puck drop between the Penguins and Marlies is scheduled for 3:05 p.m.