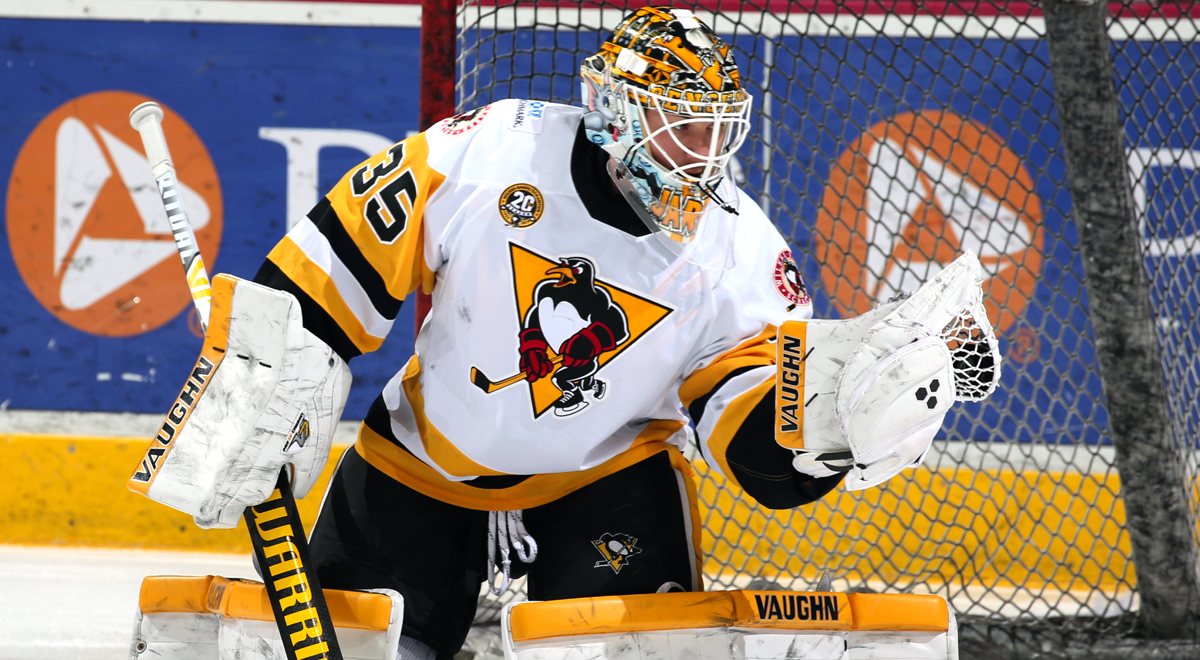 HERSHEY, Pa. – The Wilkes-Barre/Scranton Penguins contended to collect a point in a 1-0 overtime loss to the Hershey Bears on Tuesday at Giant Center.

Tristan Jarry played a large role in Wilkes-Barre/Scranton (30-24-7-3) and its opponent playing to a scoreless 60 minutes of regulation. The Penguins’ netminder put forth a heroic, 38-save showing to keep the Bears at bay long enough to secure a point in the standings. However, Garrett Pilon robbed Jarry of the shutout by scoring the game-winner in overtime.

Hershey peppered Jarry with 11 shots in the first period, but he was up to the task every time. Jarry then came up with two big saves on the Bears’ third power play of the night to keep the clubs deadlocked midway through the middle frame.

Moments after Jarry’s spectacular goaltending allowed the Penguins to escape the penalty kill unscathed, Bears goalie Vítek Vaněček stood up to his biggest test to that point. Vaněček denied Ryan Haggerty on a clean breakaway, maintaining the two rivals’ 0-0 score. By the end of two periods, Hershey had doubled up Wilkes-Barre/Scranton in shots for a total of 23-11.

Hershey put forth its most ferocious effort in the third and final frame of regulation, firing 16 shots on Jarry, but the Penguins’ goaltender had a response every single time. Neither team found the back of the net in 60 minutes of action and onto overtime they went.

Pilon took a drop pass in the high slot and wristed a shot over the glove of Jarry to light the lamp for the game’s only goal and secure the victory for Hershey 1:14 into overtime.

Jarry received second-star honors at the end of his 11th straight start for the Penguins, stopping all 38 shots in regulation time. Vaněček turned aside all 17 shots he faced to earn the shutout.

Wilkes-Barre/Scranton’s next game is Friday, Mar. 22 against the Lehigh Valley Phantoms. The Phantoms’ final visit to Mohegan Sun Arena at Casey Plaza this season also serves as an Eyewitness News Fan Friday, with lower bowl tickets available for $14 and select draught beers on sale for $2 from 6:00 – 7:30 p.m. Puck drop between the Penguins and Phantom is scheduled for 7:05 p.m.