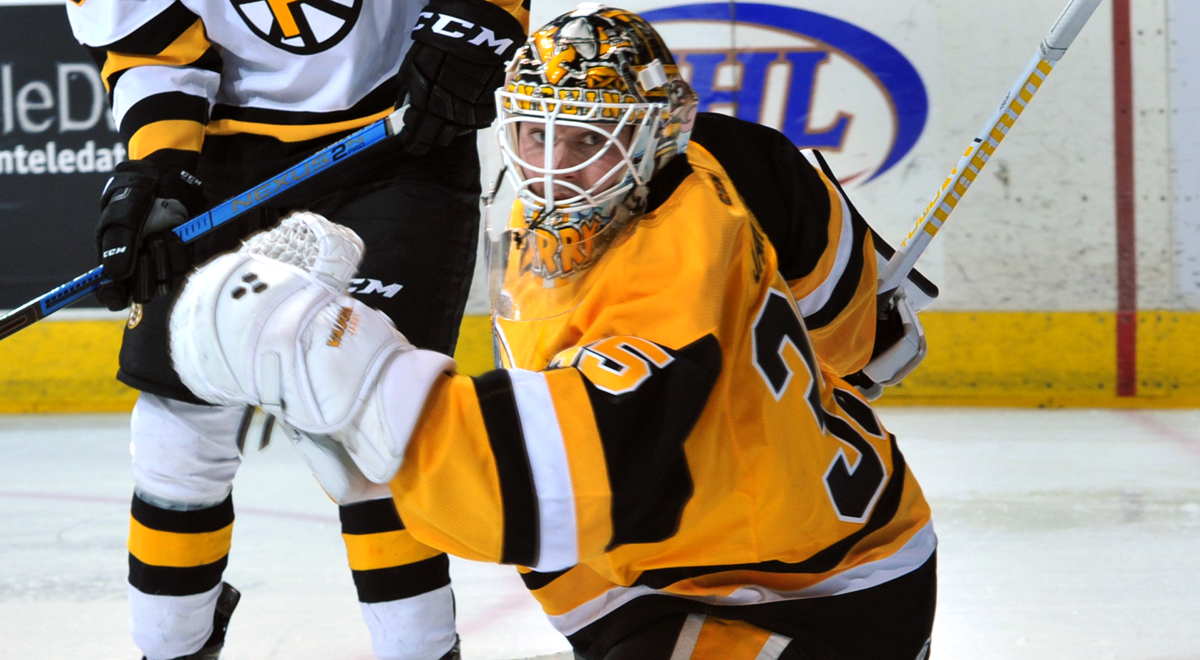 WILKES-BARRE, Pa. – The Wilkes-Barre/Scranton Penguins proved that good things come to those who wait, as they stunned the Providence Bruins with a 2-0 victory on Wednesday at Mohegan Sun Arena at Casey Plaza.

After a power outage delayed the game’s start time by an hour, Tristan Jarry came out and put forth a 23-save shutout to earn Wilkes-Barre/Scranton (33-25-7-3) an important win over one of the teams it’s contending against for playoff position.

Jake Lucchini put the Penguins on the board by hurling a shot through the five-hole of Zane McIntyre at 7:17 of the first period.

The middle frame saw no adjustments to the scoreboard, but contained massive hits and high energy from both sides. Neither club managed to cash in on a pair of man-advantage opportunities during the second stanza, thanks in large part to the play of both goaltenders. Jarry came up with a magnificent sequence during one of Providence’s second-period power plays, denying Paul Carey on a redirect in front and then scrambling back to his feet to stop Lee Stempniak with the glove.

Sam Miletic doubled the Penguins’ lead 6:21 into the third period by finishing a passing play with his linemates. Sam Lafferty stole away the Bruins’ breakout pass and then flipped it to Ryan Haggerty, who delivered the cross-slot feed to Miletic for the rookie’s 10th goal of the season.

Jarry shut things down the rest of the way, earning his first shutout of the season and the ninth of his AHL career. McIntyre saw 22 bids, turning aside 20 shots in defeat.

Wilkes-Barre/Scranton’s next game is Saturday, Mar. 30 against the Springfield Thunderbirds. Saturday also serves as the Penguins’ annual Star Wars Night at Mohegan Sun Arena at Casey Plaza. The Penguins and T-Birds are scheduled to drop the puck at 7:05 p.m.